Conversant with their long-standing friendship and several treaties dating back to the previous century, the Dutch government led by the ‘stadtholder’, Prince William V of Orange, was not unsympathetic to the British position on the rebellious American colonies, or in their war with France. The same could not be said for the disparate cities and provinces of the federalised Netherlands, as these were determined to continue the profitable trade of exporting arms and munitions to the American rebels via the back-door trading post of St. Eustatius in the Leeward Islands, as well as selling naval stores to France.

This unsatisfactory situation inevitably led to a great deal of diplomatic contact between the respective powers once Britain opened hostilities with France in the summer of 1778, and the historic treaties became the subject of much debate and re-interpretation. One treaty the Dutch were keen to abide by was the 1674 Anglo-Dutch Commercial and Maritime Treaty that allowed them to deliver non-contraband products to Britain’s enemies, the contraband in this case being deemed, although not specifically named, as arms and munitions but not naval stores. A treaty the Dutch were unwilling to abide by, and one that Britain did not insist they fulfil when going to war with France in 1778, was the Anglo-Dutch Alliance of 1678 that stated the Netherlands should provide aid in the form of six thousand troops and twenty sail of the line should Britain become embroiled in hostilities with another power. 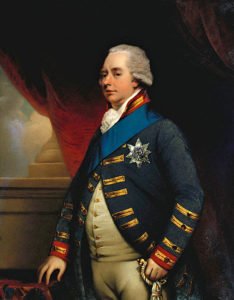 William V, Prince of Orange, who as the Stadtholder effectively headed the Dutch government, and was sympathetic to the British

In September 1778 the British ambassador to the Netherlands, Sir Joseph Yorke, advised the Dutch government that the British Navy had been instructed to detain any Dutch ships carrying not only arms and munitions, but also naval stores to France. This re-interpretation of the 1674 commercial treaty was considered to be reasonable, as Britain was not intending to invoke the mutual alliance treaty of 1678. As the arguments raged to and fro diplomatic intrigue came to the fore, and the French were able to provoke discord amongst the Dutch provinces, in particular Amsterdam and Haarlem, when their ships were detained by the British. Soon the argument centred on whether the Dutch Navy should provide an escort to their merchantmen in order to prevent their detention. Not wishing to exacerbate the situation, the British allowed a huge Dutch convoy to leave the Texel for France towards the end of 1778, even though there was little doubt that a good many of the ships were carrying the newly defined contraband of naval stores.

Over the next few months, the British position hardened and, with the aid of sound intelligence, cruisers from the Downs squadron were able to intercept and detain neutral vessels carrying the new definition of contraband to French ports. As the diplomatic row intensified the Dutch government tried desperately to placate their mercantile provinces and at the same time avoid being dragged into the war between France and Britain. Come the summer the threat of the invasion of British shores by the Franco-Spanish alliance allowed the Dutch authorities to enter a period of prevarication over the decision as to whether they should provide naval escorts or not, but then on 22 July 1779 the British government dropped a bombshell – they demanded that the Dutch fulfil the 1678 mutual alliance treaty. Clearly the Dutch were never going to accept this demand, but their rejection would allow Britain to justify the breaking of the commerce treaty and prevent, if necessary by force, the escort of naval stores to France.

In November, the Dutch provinces were finally able to force their government into providing naval escorts for their merchantmen, but with their navy in a poor condition, and being unwilling to antagonise their erstwhile allies, the Dutch government announced that naval stores would not be allowed on their convoys. This decision not only infuriated the French, who clearly required the naval stores, but also the British, who refused to countenance any form of Dutch convoy lest ships carrying contraband infiltrated it.

The first such convoy of some two dozen or more ships was assembled in the Texel during December 1779, to which the Dutch government delegated an escort commanded by Rear-Admiral Graaf Lodewijk van Bylandt, and consisting of the Prinses Royal Frederika Sophia Maria 54, Zweiten 44, Argo 40, Valk 26 and Alarm 26. When intelligence of the convoy’s existence reached the Admiralty from Yorke, together with his assurance that it contained several vessels carrying naval stores, it was decided that a force should be sent to intercept it, and Captain Charles Fielding of the Namur 90 was instructed to sail with six sail of the line, one 50-gun vessel, a frigate and four other vessels.

On 27 December the great convoy left the Texel under the watchful eye of several swift armed cutters from the British Downs squadron. Messages were conveyed back to England, and having departed Spithead on the morning of 30 December, one of Fielding’s outlying frigates signalled the presence of a fleet to windward off the Purbecks at about 3 p.m. that afternoon. The commodore ordered a general chase, and within the hour was close enough to identify a merchant convoy under escort, whereupon he detached the Courageux to the Dutch flagship with a request that an officer report to the Namur. Concurrently the Dutch admiral requested a British officer to visit him, and it was Captain Samuel Marshall of the Emerald who was sent aboard the Dutch flagship with an enquiry to know whither the convoy was bound, and with a request to be allowed to inspect the merchantmen.

Bylandt responded without duplicity to the effect that his men-of-war were destined for overseas duty in the West Indies, but that the merchantmen were bound for various ports in France. However, his assertion that they carried hemp and iron, but not timber or cordage, was contrary to the British view of what constituted contraband. His denial of the right of search was also conversant with orders from his government, but it was not what the British wanted to hear, even if it were expected. Bylandts’ nephew and flag captain, Frederik Sigismond van Bylandt, then went with Marshall aboard the Namur to convey the Dutch response to Commodore Fielding. He was informed that a request to undertake a search would be made again in the morning, and that nothing but a positive reply would be accepted. To this the Dutch captain replied that such a measure would provoke a hostile reaction. 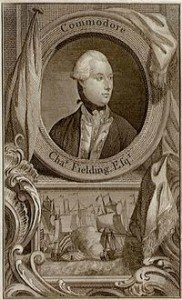 Although the two squadrons of men-of-war remained in contact during the night, up to a dozen merchantmen vanished, so come dawn Captain Marshall returned to the Dutch flagship with an insistence that permission should be given for the remaining merchantmen to be searched. Expressing regret at the situation, Bylandt replied to the effect that any attempt to board one of his charges would be disputed by force. Now the die was cast.

At 9 a.m. Fielding signalled the Emerald, Seaford, and Hawke, together with the Daphne 20, Captain St. John Chinnery which had attached herself to his force, to send boats under British colours to search the merchantmen. As expected, when the boats approached the Dutch vessels Bylandt fired a warning shot across their bows. Fielding responded in kind with a shot across the Dutch flagship’s bows, and he was met with a full broadside from the Prinses Royal Frederika Sophia Maria to which he also responded with a full broadside, at the same time signalling a general action. Some shots were exchanged between the Valiant and a Dutch frigate which only served to highlight the mismatch between the two forces. Honour having been satisfied, and apparently abiding by orders he had personally given his captains to not risk unnecessary bloodshed, Bylandt hauled down his colours in surrender. There had been no casualties on either side, and the British were able to inspect the merchant ships. Finding hemp on seven vessels, these were impounded.

Now it was the time for diplomatic niceties to come to the fore again. Fielding advised Bylandt that he could raise his colours and continue his voyage, but that the merchantmen would be taken under British protection to Portsmouth. Bylandt responded that his men-of-war were obliged to be treated the same as the merchantmen, but that if a request were put in writing he would hoist his colours again. That done, the two squadrons exchanged thirteen-gun salutes and made the best of their way to Spithead, although this was much against Bylandt’s better judgement as he wished to portray the British as the treaty-breakers. During this voyage Fielding added another two Dutch merchantmen to the seven from Bylandt’s convoy, all of which were condemned as prizes. Once the two fleets reached Portsmouth the Dutch men-of-war were allowed to leave.

Upon returning to the Netherlands Bylandt was severely criticised by many for not abiding by the standing Dutch orders of fighting until it was no longer possible to do so. This was a ludicrous unfairness given the overwhelming force ranged against him, but nevertheless he felt compelled to demand a court-martial to save his name. Fortunately, his fellow senior officers shared his realism, and he left the court with his reputation, at least officially, intact.

Tensions with the Dutch remained high thereafter, and in December 1780 the Netherlands attempted to join the League of Armed Neutrality, which had been formed earlier in the year by Russia Sweden and Denmark. In the event Britain’s declaration of war in December 1780 prevented the Dutch from doing so.