Collins was commissioned lieutenant on 15 June 1757 and promoted commander on 10 January 1771.

He commanded the sloop Nautilus from the early part of 1775 in which he sailed from Portsmouth for North America. On 10 October he drove the Continental schooner Hannah ashore near Beverly Bar, but whilst attempting to burn the rebel his command was hulled several times by fire from the shoreline and he was only able to extricate her on the rising tide. The unsuccessful attack saw one of his men fatally wounded and another wounded. During the following year Commander Christopher Mason briefly acted for Collins in command of the Nautilus, and upon the latter s return to duty he was based at Bermuda during 1777, being required to send his men ashore to help man the island s forts before sailing to Nova Scotia for a refit in August. 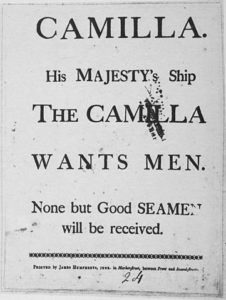 Collins was posted captain on 1 February 1778, and having joined the Camilla 20 in May he briefly flew the broad pennant of Commodore Sir George Collier whilst serving in that officer s operations up the Hudson River, off the coast of Connecticut and in the Penobscot Expedition from May to August 1779. On 13 October he captured the rebel privateer Revenge, but after being charged with escorting a Hessian regiment to Quebec that autumn he encountered foul weather in the St. Lawrence and was obliged to enter Charlotte Town on Prince Edward Island instead. Collins subsequently commanded the Camilla 20 in Vice-Admiral Marriot Arbuthnot s expedition that took Charleston on 11 May 1780, and he left her in the following year after returning from the Leeward Islands with Commodore William Hotham s convoy carrying, and losing to the French, the booty from the capture of St. Eustatius on 3 February..

Collins recommissioned the Ruby 64 in August 1782 and was present at the relief of Gibraltar on 18 October. Having been detached under the orders of Rear-Admiral Sir Richard Hughes for the West Indies the Ruby engaged the French Solitaire of similar size on 6 December 1782 when the squadron fell in with a French force off Barbados. After a close action the enemy was obliged to strike her colours upon the approach of a second British vessel, although given that the Ruby s casualties were two men wounded in comparison to her opponent s twenty killed and thirty-five wounded a victory probably would have been Collins anyway, and he was subsequently knighted for his success.

Following the death of Captain Sir John Hamilton at the beginning of 1784 Collins assumed command of the Portsmouth guardship Hector 74, retaining her until 1786, and during the Spanish Armament of 1790 he was ordered to recommission the Ruby 64 at Portsmouth.

On 25 January 1793 he was appointed to the Berwick 74, fitting her out at Portsmouth. After sailing out in May he joined Admiral Lord Hood s fleet in the Mediterranean and was present at the occupation of Toulon from August. When his men later mutinied over a dispute regarding lean beef Collins and his officers brought them back to duty without the need of force.

Having been replaced in temporary command of the Berwick by Captain William Shield, Collins died at sea on 24 March 1794 after a long illness which had been diagnosed as gout in his head and stomach. He was buried at sea.

His widow died at Chichester on 11 January 1827. Their eldest daughter, Elizabeth, married the eminent psychiatrist John Conolly. It appears that after his death Collins family were left in straitened circumstances.

He was considered to be easy-going and fair, although his prolonged illness apparently made him fractious . His chaplain and secretary aboard the Berwick, Alexander John Scott, would later become chaplain to Lord Nelson aboard the Victory, and was present with the admiral on his deathbed at the Battle of Trafalgar.