c1735-1800. He was Scottish born, the son of Robert MacBride, a Presbyterian minister who moved shortly afterwards to Ballymoney, Country Antrim, and of his wife, a Miss Boyd. His uncle, David MacBride, was an esteemed author on medical matters.

After joining the merchant service in 1751 MacBride entered the navy as an able seaman aboard the Garland 24 in the West Indies during 1754. On 27 October 1758 he was promoted lieutenant, and three years later he was appointed to the command of the cutter Grace. In August 1761 he cut a privateer out of Dunkirk without the loss of a single man, personally shooting the French captain through the head with a musket.

He was promoted commander on 7 April 1762 and appointed to the fireship Grampus 10 before removing to the Vulture 14 on 14 October. He next recommissioned the sloop Cruizer 8 for service on 27 May 1763. 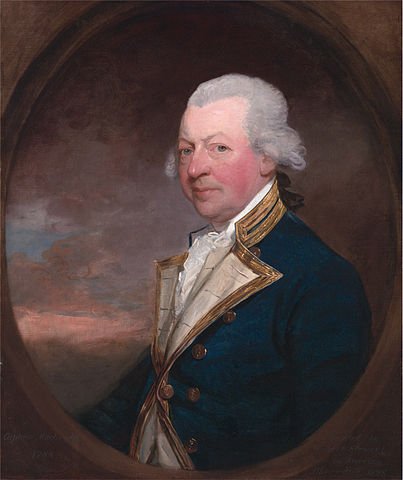 On 20 June 1765 MacBride was posted captain of the frigate Renown 30, and during August he commissioned the new Jason 32 in which he went out to Jamaica in October. During the following January he arrived in the Falkland Islands in company with the bomb Carcass, Commander Thomas Jordon, and the storeship Experiment to claim possession of the territory. After developing Port Egmont and undertaking a number of cruises around the islands a respectful meeting with the governor of the French settlers followed towards the end of the year, but without the latter accepting the British claim.

After returning home at the beginning of 1767 he recommissioned the Seaford 20, serving on the home station from August 1767 for three years and then commanding the Southampton 32 from August 1771. He was later despatched with a diplomatic mission to secure King George s sister, Caroline Matilda, the Queen of Denmark, who had separated from the King of Denmark and been imprisoned following an affair that had seen her lover executed, and he escorted her to Zell in the Electorate of Hanover. In April 1773 he commissioned the new Orpheus 32, being present at the fleet review at Spithead in June, and paying her off in August 1774 after serving in home waters.

On 6 November 1776 MacBride was appointed to the Bienfaisant 64 which was initially fitted as a guardship in the spring of 1777 before being despatched with a convoy to Madeira in June. On 28 August he captured the Boston privateer Tartar 24 in mid-Atlantic, and although she was not greatly engaged he commanded the Bienfaisant at the Battle of Ushant on 27 July 1778, vehemently supporting Admiral Hon. Augustus Keppel at his subsequent court martial.

He continued with the Bienfaisant in the Channel under the orders of Admiral Sir Charles Hardy, serving in the strategic retreat during August 1779. With the allied fleet returning to Spain and France he then sailed under the orders of Rear-Admiral Sir John Lockhart-Ross in September to investigate a rumoured a French invasion force in Cancale Bay, only to find that it did not exist.

In December the Bienfaisant joined Admiral Sir George Rodney s fleet which sailed for the relief Gibraltar, and he received the surrender of the Guipuscoana 64 during the capture of a Spanish convoy on 8 January 1780. At the Moonlight battle off Cape St. Vincent on 16 January he engaged the San Domingo 70, which promptly blew up, and in the same action received the surrender of Admiral Langara s flagship, the F nix 80. This vessel was sent into Gibraltar under his first lieutenant, Thomas Louis, although MacBride allowed all the Spanish to remain on board at great risk to the loss of his prize because of a smallpox epidemic aboard the Bienfaisant. In turn the Spanish admiral vowed not to attempt the recapture of his ship unless the Bienfaisant herself was captured, and the honourable conduct of both MacBride and Langara under such circumstances was a sign of the times. He was deservedly sent home with Rodney s despatches, although the duplicates carried by Captain Edward Thompson arrived before him.

After rejoining the Bienfaisant, MacBride cruised in command of a small squadron off Ireland in the summer of 1780, and having been ordered to seek out the French privateer Comte d Artois 64, which had been causing a great deal of trouble to the local trade, he met her on 13 August. In an action lasting over an hour the far superior French crew of six hundred men attempting to board but the Bienfaisant s crew held them off before bombarding their enemy into submission, her colours coming down shortly after the arrival on the scene of the Charon 44, Captain Thomas Symonds. The French suffered fifty-six casualties in this action in return for three British killed and twenty-two wounded. Curiously, in September MacBride captured a smaller privateer by the name of the Comtesse d Artois .

In January 1781 he was appointed to recommission the recently captured French frigate Artois 40, which at the time was was considered to be an outstanding vessel, and he fought her at the Battle of the Doggersbank on 5 August. Following the action he temporarily assumed the command of the Princess Amelia 80 in place of the fallen Captain Macartney, this measure being considered necessary in case the Dutch attempted to recommence the action, but after reaching port he returned to the Artois. On 3 December he took two beautiful Dutch 24-gun privateers, the Hercules and Mars, losing one man killed and six wounded whilst inflicting casualties of twenty-two killed and thirty-five wounded. In the next year he was present in Vice-Admiral Hon. Samuel Barrington s fleet in the Channel at the capture of two sail of the line, the more famous of which was the Foudroyant s making a prize of the P gase 74 on 20 April. He ended the war by undertaking the role of captain of the impress service in Ireland whilst the Artois paraded off the coast under the command of her first lieutenant, or her acting-captain, Edward Pellew.

Following the peace MacBride commissioned the new Druid 32 in June 1783, in which he cruised in the Irish Channel. After being elected M.P. for Plymouth in 1784 he sat for the next two years on a commission with Vice-Admiral Hon. Samuel Barrington and Captain Sir John Jervis which investigated the capability of the Plymouth and Portsmouth fortifications, and he shared their low opinion of the results. In August 1787 he visited Cherbourg to observe the French improvements of that port, and during the Dutch Armament from October he commissioned the Cumberland 74 at Plymouth. In 1788 he spoke in parliament against Admiral Lord Howe during the dispute over the yellowing of admirals, thereby playing some part in this officer s resignation as first lord of the Admiralty on 16 July 1788.

In 1788 he rejoined the Plymouth guardship Cumberland 74, which was attached to Commodore Samuel Granston Goodall s squadron of observation in the Channel during 1789 and participated in the Naval Review at Plymouth on 18 August. In 1790 the Cumberland formed part of Admiral Lord Howe s fleet during the Spanish Armament before going out to the Leeward Islands with Rear-Admiral Samuel Cornish s squadron at the end of the year. She returned home with Cornish in early 1791 and remaining in commission through the Russian Armament that year was paid off in 1792..

MacBride was promoted to the rank of rear-admiral on 1 February 1793, and nine days later hoisted his flag aboard the frigate Iphigenia 32, Captain Patrick Sinclair, as commander-in-chief in the Downs, later removing it to the Quebec 32, Captain Thomas Louis. He participated in the Channel fleet cruise from July to August with his flag on the Cumberland 74 with Captain Louis, and after returning to the Quebec, which was now under the command of Captain Josias Rogers, he led a squadron that assisted General Sir Charles Grey in driving the French out of Ostend and Nieuport during October. At various times during this period he also flew his flag aboard the Invincible 74, Captain Hon. Thomas Pakenham and Acting Captain Lawrence Halsted, the Eurydice 24, Captain Francis Cole,the sloop Echo 14, Commander Peter Halkett, and the Sceptre 64, Captain William Essington. On one occasion his squadron was erroneously chased by the British Channel fleet, and during this busy time he also spent a period ashore with a broken leg after falling off his horse.

At the end of 1793 he was given command of a frigate squadron off Brest with his flag aboard the Flora 36, Captain Sir John Borlase Warren, and in December his ships supported an expedition led by the Earl of Moira with over six thousand men that was intended to assist an uprising by the French Royalists in Brittany and Normandy. In the spring of 1794, he was appointed to an independent command in protection of the Channel Islands, and to keep watch on armaments that were being developed between Dieppe and the Ile de Batz. On 4 July 1794 he was promoted vice-admiral and placed in command of a squadron in the North Sea with his flag aboard the Minotaur 74, Captain Thomas Louis, and he continued thereafter with his flag later flying in the Russell 74, Captain Thomas Larcom, before retiring towards the end of 1796.

MacBride was promoted admiral on 14 February 1799, and he died of a paralytic seizure on 17 February 1800 at the Spring Garden Coffee House in London.

In 1769 at Bishop s Hull, Taunton, he married Charlotte Anne Harrison, the sixteen year-old daughter of the late Captain Thomas Harrison of Leigham Manor, Eggbuckland, near Plymouth and they soon had a daughter, Charlotte Anne, who would marry the future Admiral Sir Willoughby Thomas Lake*. Macbride s young wife died in 1771 and he subsequently wedded Ursula Folkes of Hillington Hall, Norfolk, on 14 July 1774. Their son, John David, became a principle of the Magdalene Hall Oxford College. The address in his will was given as Exmouth.

He was an M.P from 1784 until he lost his seat in 1790, being held in high esteem by Lord Rockingham whilst regarded as an opponent of William Pitt. Lord Sandwich described him as being an exceedingly troublesome, busy, violent man, very bold but with little understanding, reckoned an active officer and much patronised by Keppel. MacBride was also described as being a man of blunt manners and rude elegance. He spoke regularly and passionately on military matters.

He was an affable, active officer with immense talents whose untimely death was much regretted. It was notable that in the late 1760 s – early 1770 s he was entrusted with several missions when other captains were beached ashore. His work, a Journal of the Winds and Weather at the Falkland Islands , was later published, and he was an early patron of the carronade. His Devonshire connections were illustrated by his being a friend of Sir Edward Pellew s father, and his employment of James Bowen, who served as his sailing-master for much of the 1780 s. His flag lieutenant in the early years of the French Revolutionary War was Willoughby Thomas Lake, who subsequently became his son-in-law. MacBride was a great fan of cock-fighting.