As a result of the commencement of hostilities with the Netherlands during the previous December, a squadron was ordered to form for duty in the North Sea under the command of Vice-Admiral Hyde Parker in March 1781. At this time the Dutch navy was neither particularly active nor threatening, and little of note occurred before Parker was issued with instructions to form an escort for the Baltic convoy of five hundred sail that was congregating in the Leith Roads. 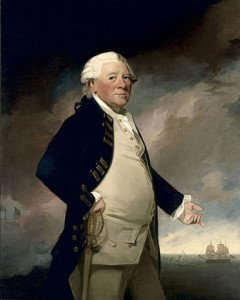 Departing home waters with orders dated 31 May, Parker s squadron of four old sail of the line and a 50-gun vessel discharged the required duties in June before collecting a homeward-bound convoy from Helsing r. Having been joined by amongst others the Dolphin 44, the frigates Belle Poule 36 and Cleopatra 32 from Portsmouth, and more advantageously from her cruising ground off Scotland the Berwick 74, Commodore Hon. Keith Stewart, Parker s squadron now increased to a total of thirteen post ships in all. Of these the huge three-decked twenty-four year old Princess Amelia 80 was in effect the weakest in any potential line of battle, having had her firepower reduced to that of a 50-gun ship, whilst three other sail were of an equal venerability, in particular the Buffalo 60, which had previously seen duty as a storeship. This inferior squadron would soon be put to the test, for on 23 July Parker received an Admiralty dispatch to the effect that a Dutch convoy had departed the Texel, and that he should endeavour to intercept it.

At daybreak on 5 August the Dutch convoy of some seventy ships under the escort of a fleet commanded by Rear-Admiral Johan Arnold Zoutman was discovered in the south-east off the Doggersbank, some sixty miles from the coast of Northumberland. Zoutman s fleet, which was on a north-westerly course, also comprised twelve aged warships including seven of the line, as well as a singularly large American frigate, the homeward-bound Charleston 36, which carried forty-two pound cannon on her main deck and was the length of a ship of the line.

A keen north-easterly breeze meant that Parker held the weather-gauge, and thus being safe in the knowledge that the four large Dutch frigates could not attack his convoy he despatched just two of his own frigates, the Iphigenia 32, Captain Charles Hope, and the Tartar 28, Captain Robert Manners Sutton, to escort the merchant vessels to safety. Satisfied that he would now be able to force an immediate action, he raised his flag at 7 a.m. and took his fleet down towards the Dutch who were lying to leeward on a flat sea. Zoutman, having detached his own convoy to leeward, resolutely awaited the British attack on the larboard tack, each of his ships a cable length apart. Surprisingly, and somewhat chivalrously, he refused to open fire upon his approaching enemy until they had formed line of battle and were within half musket-shot range. Not until 8 a.m., as the British came around on the same tack as the Dutch, did the action commence. 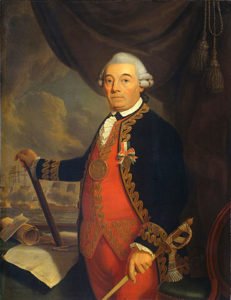 A bitter three and a half-hour engagement which was fought at close quarters followed, with the two fleets engaging in line ahead. The first of Parker s ships into the action was the Berwick, and although she dropped away when her mizzen topmast was shot down she was soon back in the action with the leading Dutch ship. By determining to place his flagship Fortitude, the fourth in the British line, against the Dutch admiral who was placed fifth in his line, an exuberant Parker allowed his rear ships to remain initially un-engaged, whilst his van temporarily faced overwhelming odds. The Dolphin 44, which had been employed in the line of battle by Parker in an attempt to equalise the numbers at seven a side, was obliged to hoist extra sail to weather the Dutch van, and predictably was roughly handled until the Artois came rushing to her assistance. Meanwhile the Buffalo was so badly disabled in the early stages of the battle that she was unable to get near her opponent.

As the battle continued throughout the morning the opposing fleets simply tore lumps out of one another, and the huge Charlestown suffered as much as any other ship. All the while the powerful Dutch frigates sailed in and out of the battle, skilfully seeking pockets where they could assist their consorts without suffering the broadsides of the British capital ships. By 11 a.m. being anxious that his enemy was falling away, Parker manoeuvred the Fortitude between the Dutch and his next ahead, the Buffalo, whilst the three ships astern of him moved up accordingly before the whole line wore in an attempt to keep the action alive. It was not to be however, for the Bienfaisant had lost her main-topmast, the Buffalo her fore-yard and the rest of the British vessels were in too battered a state to engage in any pursuit of their enemy.

After effecting repairs in sight to the south-east for some time the Dutch eventually regained their convoy and began to bear away for the Texel. As they did so the Batavier, which had lost her mizzen mast, almost turned over on her beam ends, and such was her disabled state that Zoutman sent two frigates to her rescue. Eventually she was able to turn before the wind and survive, but less fortunate was the Hollande, which after firing distress guns and running for the coast went down later in the evening, taking with her all of her wounded. On the day following the battle her masthead was still visible above the water, and this allowed sailors from the Belle Poule to climb up and salvage her pendant.

Such was the damage to Zoutman s fleet that it had to return to port without fulfilling its mission of escorting the convoy into the Baltic, and in addition to the Hollande two more ships were soon declared unfit for further service. Dutch casualties in the battle totalled one hundred and forty-two men killed and four hundred and three wounded, whilst the British lost one hundred and four men killed, including Captain John Macartney of the Princess Amelia, and three hundred and thirty-nine wounded. The combined casualties were higher than any other battle in the American Revolutionary War.

As Captain Graeme of the Preston had lost an arm in the action, Lieutenant James Saumarez of the flagship was charged with taking that ship into port. Captain MacBride of the Artois was appointed to replace the late Captain Macartney of the Princess Amelia, and his own position temporarily went to Lieutenant Martin Waghorn, the first lieutenant of the flagship, who had been wounded in the action but had remained on deck. Lieutenant Peter Rivett of the cutter Surprise was sent home with despatches, and he reached the Admiralty on the afternoon of 9 August.

Although the withdrawal of the Dutch fleet allowed Parker to claim a victory, he was outraged that he had not been given the ships to make it a more comprehensive one. On returning to England he furiously deplored the policy of the Admiralty in giving him such a small and old fleet when perfectly able ships were laying idle in the Downs, at the Nore and at Harwich. The 67 year-old admiral was barely mollified by an unprecedented visit by the King, the Prince of Wales, and the first lord of the Admiralty to his victorious ships at the Nore, where they were dined aboard the royal yacht and introduced to the captains aboard the flagship. Indeed, the rough old admiral arguably treated His Majesty with far less than the required civility, and upon the son of Captain Macartney being offered royal provision Parker responded that he had already adopted him as his own son . Refusing all honours including a knighthood, he declared that he had grown too old for the service , and wished the King younger officers and better ships Parker struck his flag shortly afterwards and did not raise it again until the change of government in 1782. Appointed commander-in-chief in the East Indies he was then lost without trace on passage to take up his new command.

The Dutch also claimed victory at the Battle of the Doggersbank, and in celebrating the fleet s performance following a quarter of a century without a major battle a number of their officers were promoted, including Admiral Zoutman.