1741-97. He was born on 22 August 1741, the fourth and youngest son of Lord George Murray, who was a general serving Bonnie Prince Charlie in the 1745 rebellion, and of his wife, Amelia Murray. His father escaped abroad in 1746 and never returned to his homeland, eventually dying in the Netherlands in 1760. Murray s elder brother became the 3rd Duke of Atholl.

Having been educated at Kew and the Royal Naval Academy at Portsmouth, Murray entered the navy in 1758 and was commissioned lieutenant on 14 October 1762.

He was promoted commander on 20 June 1765, and was employed aboard the Ferret 14 at Jamaica for the next three years. Having been posted captain of the Renown 30 on the Jamaican station on 26 May 1768, he exchanged into the Adventure 32 with Captain Thomas Fitzherbert in the following year, returning home to be paid off in January 1770. 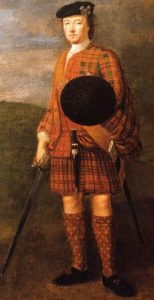 Murray joined the Levant 28 in the spring of 1775, and he brought her home from the Mediterranean before going back to the same station where he captured the American vessel General Montgomery 14 on 9 March 1777. Whilst on a cruise off Portugal in June he took the rebel privateer Vigilant 14 and a prize brig she had in company, one of many such captures that earned him a good deal of prize money. He later served in the Channel and North Sea until 1779, during which year he took the privateer Revanche on 17 July prior to being paid off in October.

Murray did not remain unemployed for long, as he commissioned the new Cleopatra 32 in the following month and was employed off the Shetlands and in the Western squadron. This vessel was a distant witness to the action between the Apollo 32, Captain Philemon Pownall, and the Stanislaus 26 off Ostend on 15 June 1780, during which engagement Murray s fellow captain lost his life. After capturing the privateer Comtesse de Provence in the North Sea on 11 November 1780 he conveyed the Baltic trade in 1781, and was present at the Battle of the Doggersbank on 5 August.

From 1783-6 Murray was in command of the guardship Irresistible 74 with the broad pennant of Commodore George Bowyer in the Medway, and during the Spanish Armament of 1790 he commanded the Defence 74 from the end of August until mid- December. He subsequently served as the commander-in-chief in the Medway during 1792-3, being based at Chatham.

Upon the commencement of war with France in 1793 Murray joined Rear-Admiral Alan Gardner s expedition to the Leeward Islands in March, flying a broad pennant aboard the Duke 98, Captain George Duff, and serving in the unsuccessful attack on Martinique where his command s mainmast was struck by lightning. He returned to England shortly afterwards to be employed in the Channel aboard the Glory 98, Captain Francis Pender

He was advanced to flag rank on 12 April 1794, and with his flag aboard the Resolution 74, Captains Francis Pender, went out to Halifax, Nova Scotia, as commander-in-chief in the following month. Arriving off the Delaware on 14 July, he reached Halifax five weeks later. In August 1795 Pender temporarily assumed the role of commissioner at Bermuda and was replaced as flag-captain aboard the Resolution by Captain Charles Penrose.

Murray sailed for England on 12 November 1796 aboard the Cleopatra 32, Captain Penrose, in a state of paralysis from a stroke which he had suffered three weeks earlier, and from which he would never recover. He died on 17 October 1797.

On 13 May 1784 Murray married Wilhelmina King, the daughter of Thomas 5th Lord King, but they had no issue.

Murray was the M.P. for Perth Burghs from 1790 until March 1796 in the Tory interest. He was a patron of Vice-Admiral Sir Charles Vinicombe Penrose who was a welcome visitor at the Murray family seat, Blair Castle in Athol. His address was given as Pitkeathly, Perth, Scotland.