In early August Captain John MacBride of the Bienfaisant 64 was ordered to take command of a convoy of some hundred vessels that had congregated at Cork, along with its escort otherwise consisting of the Charon 44, Captain Thomas Symonds, Licorne 32, Captain Hon. Thomas Cadogan, and Hussar 28, Captain Charles Morice Pole. He was also instructed to look out for the formidable French privateer Comte d Artois 64, which had been enjoying a most successful cruise against the British trade off the southern coast of Ireland.

Departing Cork on 12 August, the Bienfaisant was near the Old Head of Kinsale on the following morning whist the Charon, Licorne and Hussar were still herding the rear of the convoy off the port of departure. In the early hours a strange sail was seen, and MacBride set off at speed to inspect. Upon the Bienfaisant s approach the stranger hoisted British colours and withheld her fire, thereby obliging Captain MacBride to do the same. Being keenly aware that there was a good chance of the other vessel being the Comte d Artois, and that she would seek to lure the Bienfaisant in and overwhelm her by weight of numbers, MacBride was circumspect, and indeed, it was only after hailing her at pistol shot that he established her identify. She was indeed the Comte d Artois, commanded by the Irish-born Chevalier Robert Sutton de Clonard. 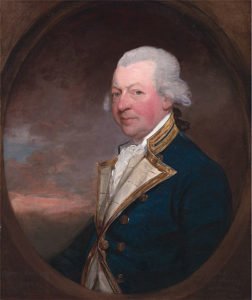 The Bienfaisant had been launched at Brest in 1754, but had only served France for two years before being cut-out from Louisbourg by the British in 1756. Until re-commissioned by MacBride in 1776 she had seen little service, but the active Irishman had soon made up for that, and after she had participated in the Battle of Ushant in 1778 she had then brought glory to her new colours by receiving the surrender of the Spanish Guipuscoana 64 and Admiral Don Juan de Langara s Fenix 80 at the Moonlight Battle in January 1780, as well as being involved in the action that saw the Santo Domingo 70 take fire and blow up.

By French accounts the Comte d Artois only had sixty-three serviceable cannon when the Bienfaisant approached her, as one had burst a few days before killing and wounding twenty-three men. Her aged and frail timbers would also prevent her from firing all of her remaining cannon, and she was unable to load these guns with anything but round shot. She did however enjoy a superiority in manpower, with a crew of six hundred and sixty-four men to the approximate number of five hundred serving aboard the Bienfaisant. As such her only hope of victory was to grapple with her opponent and carry her by boarding.

The action began at 7.30 a.m., but initially it was confined to the use of muskets as the Bienfaisant had been carried beyond the Frenchman s bow and neither could bring their cannon to bear. After the first volley from the British marines on the poop deck the Comte d Artois hoisted her national colours, and once both ships cannon could be brought to bear they began slugging it out at pistol-shot range. MacBride was extremely alert to the threat of being boarded by his enemy, and by assuming a favourable position off the Frenchman s bow the Bienfaisant soon turned gained an ascendancy. For over an hour and ten minutes the action continued unabated until the arrival of the Charon, whereupon her assumption of a raking position from bow to stern brought about the French privateer s surrender. Later French accounts suggested that the Bienfaisant actually resisted the two opponents for two hours and fifteen minutes and only struck her colours as the Hussar and Licorne showed signs of joining the action.

Twenty-one men were killed and thirty-five wounded aboard the Comte d Artois, with the latter number including the Chevalier de Clonard. The Bienfaisant lost three men killed and twenty-two wounded, whilst the Charon suffered one man slightly wounded, the low level of British casualties bearing testament to the fact that the Comte d Artois had been unable to load her cannon with grapeshot.

The Comte d Artois was not bought into the navy, but the Bienfaisant continued in service, and by coincidence she captured a smaller French privateer by the name of the Comtesse d Artois in September, whilst at the end of the year MacBride transferred to the Artois 40, a fine French frigate which had been captured on 1 July by the Romney 50, Captain Roddam Home, off Portugal. After being present at the Battle of the Doggersbank in 1781, and the relief of Gibraltar in the following year, the Bienfaisant was retired at the end of the American Revolutionary War, but she saw further service as a prison ship in the French Revolutionary War before being eventually broken up at Plymouth in 1814.