1719-1808. He was born at Roddam Hall, Northumberland, the second of three sons of Edward Roddam, of Roddam, near Alnwick, and of his wife Jane Skelly.

In 1735 Roddam entered the navy aboard the Lowestoft 20, Captain Charles Drummond, serving in the Leeward Islands for the next five years. Remaining in the Caribbean, he was further employed aboard the Russell 80 and Cumberland 80, both vessels commanded by Captain Harry Norris with the flag of Rear-Admiral Sir Chaloner Ogle, and the Boyne 80, Captain Thomas Watson, the flagship of Vice-Admiral Edward Vernon. During this time he participated in the attack on Cartagena in 1741, and the occupation of Guantanamo Bay on Cuba. On one occasion he fortuitously survived a cannon shot that tore off part of his coat.

On 2 November 1741 he was promoted to the rank of lieutenant and joined the Superbe 60, Captain William Harvey. This officer proved to possess an excessively cruel nature, and largely on Roddam’s evidence he was cashiered at Plymouth in August 1742. Roddam next joined the Monmouth 70, Captains Charles Wyndham and Henry Harrison, on which vessel he served for some four years off France.

On 7 June 1746 he was promoted commander of the sloop Viper 10 which was launched at Poole on 11 June, and which enjoyed a fruitful period cruising, taking the privateers Nuestra S nora de la Candelaria on 15 October, the Demouchy on 7 January 1747, and the Nuestra S nora del Pilar on 20 June. More importantly, Roddam earned the approbation of Commodore George Anson when he 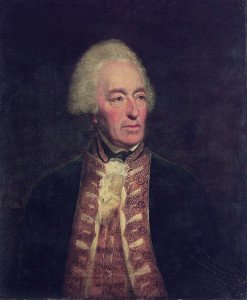 took his new command to sea in severe weather after more senior officers had baulked at the prospect. Following his part in the storming of Cedeiro Bay, near Cape Ortegal, where twenty-eight merchantmen were burned and five more captured, in addition to a privateer, he was rapidly posted captain of the Greyhound 20 on 9 July 1747. He remained with this vessel until the peace of 1748, and thereafter served at New York from 1749 until being paid off in September 1751.

From the beginning of 1753 into the following year Roddam had the guardship Bristol 50 at Plymouth, and in 1755 he joined the Greenwich 50 and took her out to Jamaica after the commencement of hostilities with France in 1756. Unfortunately on 16 March 1757 she was captured by a French squadron of five sail of the line and two frigates off Cape Cabron, San Domingo after resisting various attacks over twelve hours. Roddam was treated with scant courtesy by his captors and imprisoned at Cap Fran ois, but in June he and his men were returned to Jamaica on parole. Having been brought to a court martial on 14 July aboard the Marlborough 74 in Port Royal Bay he was honourably acquitted for the loss of his ship, whereupon he returned to England in a packet boat and was formally exchanged by the French.

He next joined the Colchester 50 towards the end of 1759 and was employed with Admiral Sir Edward Hawke’s fleet off France. Being in a leaky state, his command was twice returned to Plymouth for a refit, and when she was finally made sea-worthy was sent out to St. Helena in the spring of 1760 to meet a convoy. Upon returning to England the Colchester rejoined the Channel fleet but was paid off two years later when found unfit for service.

During the Falkland Islands dispute Roddam was appointed to the Portsmouth guardship Lenox 74 in December 1770, remaining with her until the end of 1773. Three years later he succeeded to the family estates on the death of his brother.

In the spring of 1777 he was appointed to the Cornwall 74 at Portsmouth, and on 23 January 1778 was promoted to rear-admiral, holding the command at the Nore until the end of the war in 1783 with his flag mostly aboard the Conquestador 60, Captain James Orrock. He also sat on Admiral Hon. Augustus Keppel’s court martial following the Battle of Ushant on 27 July 1778, and was further promoted vice-admiral on 19 March 1779.

After a period of unemployment Roddam flew his flag at Portsmouth as port admiral from 1789-90 aboard the Barfleur 98, commanded by his brother-in-law, Captain Robert Calder. Remaining as commander-in-chief until 1792, he had his flag aboard the Royal William 84, Captain George Gayton, during the Spanish Armament of 1790 and through to the following year, whereupon he rejoined Calder aboard the Duke 98. He became an admiral on 1 February 1793 but did not see any further service.

Roddam died at Morpeth on 31 March 1808 and was buried in the churchyard of Roddam village.

He was married three times. His first marriage was on 24 April 1749 to Lucy Clinton, the daughter of Admiral of the Fleet Hon. George Clinton, the governor of New York from 1743-53, which lady passed away in December 1750. His second marriage in March 1775 was to Alithea Calder, the sister of the future Admiral Sir Robert Calder, and lasted seventeen years until her death in 1792. Lastly he married Ann Harrison of Northumberland on 24 September 1795. Having no issue from any of his marriages his estates passed to his godson William Stanhope, the great-grandson of his first cousin, who inherited the name Roddam in 1806 and was commissioned lieutenant in 1812. Roddam s grand niece married Vice-Admiral Lord Collingwood.

He was a very capable and well-regarded officer who was always prepared to risk his reputation in the line of duty, whatever the difficulty. He did much to improve Roddam Hall following his inheritance of 1776. Roddam was happiest at sea with his own kind and avoided any other role in the Establishment.