Smith was commissioned lieutenant on 4 December 1779 and in that rank commanded the sloop Alderney 10 from November 1780, capturing the French privateer Lady Washington 12 off Yarmouth on Christmas Day.

By 1782 Smith was serving aboard the Formidable 90, Captain John Symons, which flew the flag of the commander-in-chief, Admiral Sir George Brydges Rodney, at the Battle of the Saintes on 12 April. Six days later on 18 April, he was promoted commander of an ex-Massachusetts privateer renamed the Barbadoes 14, which he commanded in the Leeward Islands. Remaining on that station he was posted captain of the St. Eustatius 20 on 18 April 1783, which vessel was sold later the same year at Antigua.

In the winter of 1786 Smith was appointed to the frigate Carysfort 28, which sailed from Portsmouth in April 1787 giving passage out to the Mediterranean to Major-General Charles O Hara, who had been appointed lieutenant-governor of Gibraltar, Captain William Sidney Smith, who was to undertake some experiments on a pumping system for the Admiralty, and the ambassador from Tripoli to Britain who was returning to his home city with a plethora of gifts from King George III to the Bey. Remaining in the Mediterranean for the next three years, the Carysfort returned to Portsmouth in April 1790 where she was briefly quarantined before entering the dock for a refit. She then spent some time off St. Helens during the Spanish Armament as a guardship before running up the Thames in December to be paid off. 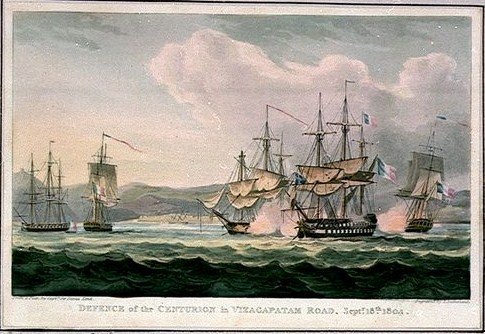 The inconclusive action of 22 October 1794 that eventually saw Captain Smith brought to a court martial and dismissed the service.

During the spring of 1793, and following the commencement of the French Revolutionary War, Smith was appointed to the Diomede 44, being initially employed in convoy duty to Leith before fitting out for the East Indies in the autumn and sailing in November. She reached Cape in early January 1794 and thereafter proceeded on to Madras.

On 22 October 1794, being in company with the Centurion 50, Captain Samuel Osborn, the Diomede fell in with two French frigates, a corvette and a sloop off Mauritius. In the action that followed the Diomede provided such little support to her consort that the French frigate Cyb le 40, although roughly handled, was able to make good her escape.

Smith continued to command the Diomede 44 in the East Indies during 1795 whilst a cloud still hung over his conduct from the previous 22 October. More misfortune followed when he joined the expedition which would eventually capture Trincomale on 26 August, for on 2 August the Diomede struck a rock in the bay and sank, taking with her valuable stores, although her crew was saved. Smith then fought ashore in command of a naval brigade comprising three hundred seamen and marines.

In the meantime, he had registered a complaint with Captain Osborne over the content of his despatch concerning the unsatisfactory action of 22 October 1794, and although the Centurion s captain was less deprecatory in response to Smith s protestation he nevertheless found it necessary to seek a court-martial to investigate their joint conduct, the result of which was that Smith was dismissed the service.

After returning to England, and after much legal intervention, Smith s dismissal was rescinded in 1798, but he was never employed again and he became a captain on the superannuated list in 1806.

Smith followed his father in becoming a fellow of the Royal Society. His Christian name was variously spelt Mathew and Matthew.