1739-1816. He was the son of Samuel Pitchford and Susannah Cornish, and the nephew of Vice-Admiral Sir Samuel Cornish.

As Samuel Pitchford he served his early years in the East Indies under the patronage of his uncle, Rear-Admiral Samuel Cornish, being commissioned lieutenant during the voyage thither on 6 August 1759 whilst serving aboard the flagship Lenox 74, Captain Robert Jocelyn. He remained with his uncle when that officer was sent by the commander-in-chief, Rear-Admiral Charles Stevens, to attack Fort George at the beginning of 1760, and was present at the capture of the French base of Caricall on the Coromandel Coast in April.

With his uncle having succeeded to the chief command in May on the death of Rear-Admiral Stevens, Pitchford was posted captain of the America 60 on 24 August 1761, and he served in his uncle s expedition against Manila in the autumn of 1762 where he led a brigade of seamen ashore. He remained in the East Indies after the war, being present in the Madras Roads when a hurricane caused great devastation on 20 October 1763. The America only survived the storm by putting to sea, and when she returned the next day it was in a state of much disorder and with her men at the pumps. He returned to England in the ensuing year with the America being paid off in August 1764.

In 1771 Pitchford assumed the name of Cornish as the chief beneficiary of his uncle s will, but he otherwise remained out of employment until some months after the entry of France into the American War of Revolution. 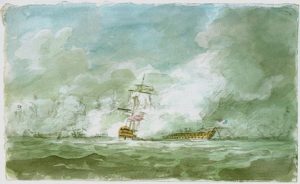 HMS Invincible in action during the Seven Years War. Cornish commanded her at the Moonlight Battle in 1781

In November 1778 he commissioned the London 98, which vessel served as the flagship to the newly promoted Rear-Admiral Thomas Graves in the spring of 1779, and in the late summer he took command of the Invincible 74, possibly on a temporary basis for Captain Charles Saxton. He commanded her in the Channel fleet following its retreat before the allied armada in August, and in Admiral Sir George Rodney s Moonlight Battle with the Spanish on 16 January 1780, where she suffered casualties of three men killed and four wounded. He then assisted in the escort of the victaulling vessels that relieved Port Mahon before rejoining the fleet, and he left the Invincible after returning to England in the early spring.

In May 1781 Cornish was appointed to the Arrogant 74 for service in the Channel, participating in the campaign of June-November, and after going out to the Leeward Islands in January 1782 he commanded her at the Battle of the Saintes on 12 April, although his ship did not suffer any casualties. When the Leeward Islands fleet sailed north for the winter under the orders of Admiral Hugh Pigot he remained cruising off Boston under the orders of Rear-Admiral Lord Hood. Returning home, the Arrogant was paid off in July 1783.

During the Spanish Armament of 1790 Cornish commanded the Marlborough 74, and when he was promoted rear-admiral on 21 September he retained this vessel as his flagship with Commander Charles Craven as her captain. He was placed in command of a squadron of observation, consisting of six sail of the line, with orders for the West Indies but although this force set sail from St Helens on 26 October Cornish returned to Spithead on the following 13 February when it was clear that Britain and Spain would not go to war.

On 16 October 1771 Cornish married Mary Gambier of Cavendish Square, London, the sister to the future Admiral Lord Gambier, but they do not appear to have had any children. He inherited Tofte Manor in Sharnbrook Bedfordshire from his uncle but at the time of his death was noticed as living at Puttenham in Surrey.