Having been educated at l cole Royale de la Marine in Calais with his brother Henry, Harvey entered the service in 1755 aboard the Falmouth 50 under Captain William Brett, a distant marital relative of his mother. He first came to notice two years later when his quick thinking prevented a pilot taking the vessel on to the Goodwin Sands after being confused by the North Foreland light.

Enjoying the patronage of Captain Brett s brother, Captain Sir Piercy Brett M.P, and having come to the notice of Vice-Admiral Holburne, the commander-in-chief at Portsmouth, Harvey was commissioned lieutenant of the sloop Hornet 14, Captain Hon. Charles Napier, on 18 September 1759. After seeing service at Jamaica he remained on this vessel under a number of other commanders including Captains George Johnstone, under whom the Hornet was employed in the Channel. Harvey moved to the Arethusa 32, Captain Hon. Raby Vane, at Lisbon, in March 1761, remaining with her until the peace. 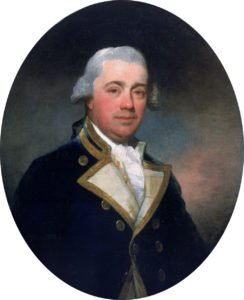 From 14 November 1766 until June 1768 he commanded the cutter Alarm 6 off Scotland, but there ensued a long period of unemployment following his promotion to the rank of commander on 26 May 1768.

Harvey was finally appointed to the sloop Speedwell 8 in January 1776, serving in home waters and patrolling between Beechy Head and the Downs against American privateers in the summer of the following year. On 16 September 1777 he was posted to the Panther 60 as flag captain to Rear-Admiral Robert Duff in the Mediterranean, going out in December. During 1780 he served at the defence of Gibraltar, being the senior naval commander at one stage, and going aboard the Terrible 74, Captain James Douglas, to pilot in Admiral Sir George Rodney s relief fleet following its defeat of a Spanish force off Cape St. Vincent on 16 January. Famously, he directed the repulse of a Spanish fireship attack on 7 June before returning to England in July where his ship was refitted and coppered at Portsmouth.

In November 1780 the Panther sailed with Rear-Admiral Sir Samuel Hood s squadron to the Leeward Islands. Here she assisted at the capture of St. Eustatius on 3 February 1781, and at the interception of a Dutch convoy from that island by Captain Francis Reynolds. She subsequent fought at the Battle of Martinique on 29 April, and in the defence of St. Lucia from the French fleet, but was found to be unfit for further duty and returned to Cork with the trade and the Triumph 74, Captain Stair Douglas, in the late summer, having diverted to Ireland to avoid an enemy fleet which was known to be at sea.

Early in 1782 Harvey was appointed to the Sampson 64, serving in a detachment of the Channel Fleet with Vice-Admiral Hon. Samuel Barrington off Ushant, and then off Brest under Rear-Admiral Richard Kempenfelt from April to August. He was present at the relief of Gibraltar on 18 October and the ensuing action off Cape Spartel where his command lost two men killed but ably supported the Alfred against an enemy 80-gun ship.

Harvey was afterwards sent on a month-long cruise in command of a squadron otherwise consisting of the Crown 64, Captain Samuel Reeve, Vigilant 64, Captain John Douglas, Andromache 32, Captain George Anson Byron, and Minerva 38, Captain Hon. Thomas Pakenham, but during this employment nothing of note occurred. Shortly afterwards he was appointed flag captain to Admiral Lord Howe, a post he did not in the event take up as hostilities came to an end.

In 1787, during the Dutch Armament, Harvey was appointed regulating captain at Deal, and from 1788 he commanded the guardship Arrogant 74, being initially employed in the Medway, then at Portsmouth during the Spanish Armament of 1790. He retained the command through the Russian Armament of 1791, and following a period of duty at Chatham his ship was paid off in February 1792.

In February 1793 he was initially appointed to the Magnificent 74, but then removed at Admiral Lord Howe s request to commission the Brunswick 74 in July, participating in the Channel fleet cruises of July- August and October-December, and being present in the chase of Rear-Admiral Vanstabel s force on 18 November.

Harvey was mortally wounded at the Battle of the Glorious First of June 1794 during his ship s extraordinary fight with the Vengeur, a four hour duel fought at pistol-range which saw the Brunswick suffer massive casualties of thirty-two men killed and ninety-four wounded. This brutal engagement only ended when the French ship sunk with the majority of her hands, it being very rare at this time for a ship to be sunk by gunfire alone. Harvey was wounded three times during the fight, having his right hand struck by a musket ball which tore away three fingers, suffering a splinter wound in the small of his back, and seeing an arm shattered by a round shot to his elbow. Refusing all assistance, he walked below where his arm was amputated several hours later. Fever-ridden, he was taken ashore at Portsmouth in terrible pain with contusions to his back and he died on 30 June.

Harvey was buried at Eastry, and a monument was erected to his memory in Westminster Abbey. A grateful monarch then conferred a pension on his widow and two youngest children, Edward and Sarah. Had he survived he would immediately have been due a promotion to flag rank.

On 27 September 1763 Harvey married Judith Wise of Sandwich by whom he had four sons, two of whom, John and Edward, became admirals, Richard died as an infant, and the eldest son, Henry Wise Harvey, produced two sons for the navy. Harvey also had four daughters, one of whom, Sarah, married her cousin, Vice-Admiral Sir Thomas Harvey, and another was a mother to three naval officers.

He was highly esteemed by Lord Howe and was considered a most professional officer and a great loss to the service.