The fact that the financially profligate Admiral Sir George Rodney had been forced to flee for Paris in 1775 to escape his massive debts, a huge sum of which related to election fees, had delighted his many political opponents. The fact that he had been obliged to rely on a loan from a marshal of France to enable him to leave the enemy city of Paris and return home in 1779 had confirmed their opinion of his fiscal ineptitude. It therefore followed that in the particularly hostile political atmosphere that prevailed in Britain following the commencement of the war against the American colonies, any move by Rodney to fill his empty pockets in his role as the commander-in-chief of the Leeward Islands station would be liable to the utmost scrutiny.

A tactful man would have been able to avoid any possibility of accusations of profiteering, but tact was never particularly high on the list of Sir George Rodney’s attributes. Commanding the less enriching of the two West Indian posts, he had enjoyed few opportunities to clear his debts, but when the sloop Childers, Commander Hon. John Whitmore Chetwynd, arrived at Barbados from London on 27 January with news that the country was now at war with the Dutch, Rodney quickly seized the chance to put his bank balance back into the black.

Fifty miles north of St. Kitts lay the tiny barren Dutch island of St. Eustatius, and the instructions from London were that it should be captured. Some twenty miles in circumference, St. Eustatius was a Caribbean trading post of great importance to Britain’s enemies, and for some time contraband and arms destined for the American rebels had been passing through it. Rodney was keen to profit both financially and morally by its capture, and there was the added incentive of being able to confiscate British owned goods which were being sold to the enemy on St. Eustatius. The fact that only a meagre force of militia defended the island meant that the sole threat to its capture was an unlikely intervention by the French.

Rodney took his fleet to sea on the afternoon of 30 January, and by way of a ruse appeared off Martinique where he detached Rear-Admiral Francis Samuel Drake with six sail and two frigates to keep an eye on the four French sail of the line and two frigates based there. Then after stationing the recently-arrived Rear-Admiral Sir Samuel Hood with five sail of the line between Montserratt and Nevis in order to prevent any discourse with St. Eustatius, he departed for the Dutch island with the remainder of his fleet which included more than a dozen sail of the line. With him sailed an army of three thousand troops under the command of Major-General Sir John Vaughan. Given the paucity of the Dutch defences this force was ridiculously powerful, but with his eye on the prize Rodney was determined not to take any chances, and he even recalled Hood’s squadron to join the invasion.

It took two days to cover off the two-hundred-and-forty-mile voyage north, and upon arriving off St. Eustatius at 10 a.m. on Saturday 3 January the two commanders sent Lieutenant-Colonel James Cockburn ashore with a summons to the garrison. The Dutch governor, Johannes de Graafe, was unaware that war had been declared, and with a militia of barely sixty soldiers to defend the island he had no option but to surrender without resistance. The only incident of note occurred when upon going aboard the Dutch frigate Mars 38, Count Grave Van Bylandt, to negotiate her surrender, Lieutenant William Nowell of the Resolution 74, Captain Lord Robert Manners, allowed her to fire her cannon as a token gesture of defiance. To this presumed resistance the Prince William 64, Captain Stair Douglas, and several other vessels including the Resolution responded. Captain Douglas was later severely reprimanded by Rodney for his error, and even the favoured Lord Manners received a rebuke.

In the meantime, Rodney had learned that a thirty-ship convoy under the escort of the 60-gun Mars, flagship of Rear-Admiral Willem Krul, had left the settlement just prior to the capture, and he despatched Captain Francis Reynolds of the Monarch 74, in company with the Panther 60, Captain John Harvey, and Sibyl 28, Captain Lord Charles Fitzgerald, to chase it down. This force came up with the unsuspecting Dutch at 10 a.m. on 4 February, whereupon Captain Reynolds hailed the admiral to demand his surrender. After a short and perhaps deliberately confused conversation the summons was refused, whereupon Reynolds immediately ordered his squadron to open fire. A one-sided forty-five-minute action followed in which Admiral Krul was killed, his flagship surrendered, and the Sybil rounded up the whole convoy. The Mars was subsequently bought into the navy as the Prince Edward under the command of Captain George Anne Pulteney, and the body of the Dutch admiral was returned to St. Eustatius for burial with full military honours.

Rodney was overwhelmed by the proceeds of his conquest, which consisted of one hundred and fifty merchant ships, both Dutch men-of war named Mars, five American warships with cannon ranging from 14 to 26 guns, stores, and booty amounting to a value of three million pounds. A thousand Americans were also taken prisoner. The mile and a half long parade of warehouses on the waterfront was bulging with goods, and these even overflowed onto the beach itself. Much of the merchandise was British, including some that was removed from twelve merchantmen in the harbour, which ships had slipped away from Rear-Admiral Sir Samuel Hood’s convoy following its arrival in the Leeward Islands during the previous month. Another capture, although not necessarily a profitable one, was that of the nearby island of St. Martin on 6 February by a small squadron under the command of Captain Charles Thompson of the Alcide.

Over the next few weeks Rodney kept the Dutch flag flying over the island so as to entice even more merchantmen in to be captured, and such was his avarice that whilst he should have been furthering the campaign against the enemy, both he and Vaughan remained on St. Eustatius sorting through the booty. Their justification, that a senior presence was necessary to deal with the various legal questions pertaining to property, and to ensure that the island could be defended from an enemy attack whilst the goods were being removed and the warehouses destroyed, was considered somewhat hollow by their subordinates. Rear-Admiral Hood, who had been instructed to take the majority of the fleet to cruise off Martinique, moaned about his chief’s inactivity, and he claimed that Rodney preferred to revel in his newfound riches rather than progress the war by attacking the Dutch possessions of Curaçoa or Surinam. This criticism was not entirely defensible however, as those particular islands were in the sphere of influence of the commander-in-chief at Jamaica, not the Leeward Islands. 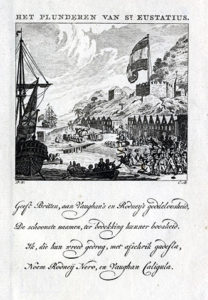 A Dutch view of the capture of St. Eustatius

If people regarded Rodney’s and Vaughan’s behaviour towards the captured wealth as reprehensible, then their orders to arrest the entire Jewish population of the island on 13 February prior to its deportation were considered to be simply vile. The men were separated from their families and apparently roughly treated whilst imprisoned. Soon they were transported to St. Kitts, and although a subsequent appeal to Rodney and Vaughan saw their return to St. Eustatius, it was only after a great deal of their property had been pillaged, some of it even from their person. Rodney was later to claim that the whole Jewish episode had been a mistake, and one that he had rectified on immediately gaining knowledge of it. Many had their doubts, however.

Rodney’s prospective share of the prizemoney not only promised to clear his debts but also to make him rich beyond his dreams. Without giving a thought to the likely protracted legal arguments he would undoubtedly face over his seizure of the contraband British goods, he at once authorised their auction. Loitering at St. Eustatius from February to the beginning of May, he found time to write home and urge one of his sons to marry, as he would soon be a man of property. But the St. Eustatius loot proved to be fool’s gold, and with regard to money there was no bigger fool than Rodney.

The booty that had not been disposed of by the auction was packed off to England on 20 March under the care of Commodore William Hotham with an escort of two sail of the line and three frigates. Not surprisingly, given that a number of French informers had attended the auction even whilst the convoy was loading, word got back to Europe of the sailing of the thirty-three-ships. Although Rodney requested the Admiralty to send out elements of the Channel fleet to receive the convoy, it was instead intercepted some twenty leagues off the Scilly Islands on 2 May by a force of eight French men of war under Admiral Toussaint Guillaume La Motte-Picquet. Taking advantage of the Channel Fleet’s expedition to Gibraltar, the French had slipped out of Brest a week previously.

Hotham tried to protect the convoy as best he could, but in such circumstances merchant captains often took their own course, and when they scattered the French were easily able to snap up twenty-two vessels whilst totally ignoring Hotham’ s men-of-war. Eventually the commodore made Beerhaven Bay in southern Ireland on 8 May with a mere ten sail in company, to be joined over the succeeding days by other remnants of the escort and convoy. The French regained Brest three days later with a flying Channel Fleet squadron of eight sail of the line under the command of Rear-Admiral Hon. Robert Digby eating up their wake. At least there was some honour for one British officer, Captain Walter Stirling of the Gibraltar 80, who after returning home with Rodney’s despatches was knighted.

Not until 5 May did Rodney depart St. Eustatius with the Sandwich 90, Russell 74 and Triumph 74 to link up with Hood between St. Kitts and Antigua. By then that officer had already fought the indecisive Battle of Fort Royal where the fleet should have been commanded by Rodney. In terms of the outcome of the war, this failure to snuff out the French fleet’s threat would prove crucial.

On 26 November St. Eustatius was captured from the British by a French force under the command of François Claude Amour, the Marquis de Bouillé, with barely a shot being fired in resistance. The hapless Rodney was left with nothing but lawsuits from the outraged British merchants, whilst in parliament Edmund Burke and the Whigs revelled in his recklessness, accusing him of seeking riches before attacking military targets, and of wasting his resources in a personal crusade to fill his empty purse. A committee of enquiry was set up which would certainly have found against him had he not won the Battle of the Saintes against the French in the spring of 1782. By then the incoming Whig ministry had already sent out one of their favoured admirals to replace Rodney, a decision which was shamed by his great victory, and any further hounding of the hero of the hour would have been appeared churlish in the extreme.