Despite the replenishment of Gibraltar on 19 January by Admiral Sir George Rodney’s fleet and attendant merchant vessels, the Spanish had not let up in their determined campaign to regain the rock fortress which they had lost to Britain at the commencement of the century. Equally, the British garrison had shown no weakening in their tenacity to retain the base which held such a strategic position between the French Brest and Toulon fleets, and which commanded the gateway to the Mediterranean Sea.

Following the relieving fleet’s departure from the Rock in the second week of February, Commodore John Elliott had been left in command of the naval defences at Gibraltar, but this unilateral appointment by the admiral had been frowned upon by the Admiralty which required Elliot’s pennant ship the Edgar 74, to supplement the home fleet. On 20 April, having been recalled, Elliott was able to make good his escape from the Rock, and the forty-year-old Captain John Harvey, an officer from a well-regarded seafaring family, assumed command of the remaining naval force. Under his orders was a small squadron consisting of his own command the Panther 60, the frigate Enterprise 28, Captain Patrick Leslie, and the sloop St. Fermin 16, Commander Jonathon Faulknor. In order to advance their campaign, the Spanish resolved that these vessels had to be destroyed. 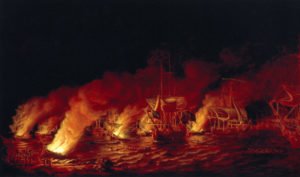 It had long been surmised that the Spanish would attempt a fire-ship attack upon the British vessels at Gibraltar, and on 6 June Harvey received intelligence that they had five or more vessels available for that purpose. On the same day, a 74-gun Spanish man-of-war was seen sailing out of Algeciras to take up a position away to the east. Clearly something was afoot.

In order to counter any enemy attack upon the two dozen vessels gathered around the New Mole, many of which were laden with ordnance, Harvey had already instructed the Enterprise to anchor to the north of the New Mole, whilst the Panther was anchored further to the south in Rosia Bay. At one o’clock in the particularly dark and cloudy early hours of the next morning, 7 June, the Enterprise was approached on the fair north-westerly wind by an unknown sail. Upon being challenged, the stranger announced that she was a ‘beef boat from Barbary’, but before any further interrogation could take place a stream of fireworks and combustibles spiralled into the night sky. Suddenly, the British shipping gathered around the New Mole found itself at the mercy of five or six fire-ships bearing down upon them in a crescent formation, whilst a horde of boats packed to the gunwales with armed men could just be identified, and from somewhere shells began to rain down upon the British ships.

The Enterprise quickly let lose three shot to warn her consorts and the garrison of the impending threat, and cutting her cable she edged closer inshore. At the same time, she and the other vessels around the New Mole opened fire on the approaching sail, whilst men from the Enterprise, St. Fermin and the ordnance transports took to their boats to try and grapple and steer away the blazing ships. The largest fire-ship, estimated to be about the size of a 50-gun vessel, caused a great degree of panic when all attempts to board her were thwarted by the raging inferno, but salvation came in the form of a 32-pounder cannon on the Mole-Head, whose firing of bar-shot was credited with forcing her head around. Eventually, the tide carried this vessel a hundred and fifty yards past the Mole to safety. Three other vessels that had been chained together were boarded and separated by the British sailors, being towed to safety to the south of the New Mole, and the remaining fire-ships drove harmlessly ashore of their own volition. By about 2 a.m. the shipping around the New Mole was clear of danger.

Meanwhile, the Panther at her anchorage in Rosia Bay had come under threat from three or four of the fire-ships that had cleared the New Mole, and even though she slipped her cable and got under way, one of the fire-ships came so close to Captain Harvey’s command that she melted the pitch on her hull. Men from the Panther managed to grapple these vessels and tow them safely onto the shore, but the Spanish were still not finished, and at 2.30 two more ships were discovered closing on the Panther. Harvey’s men opened fire upon these vessels, whereupon they were set alight. Once again, her boat crews were able to get lines aboard the ships to tow them away from danger, with one eventually settling near Europa Point and the other drifting harmlessly out to sea.

Whilst the fire-ship attack had been under way, the garrison’s batteries had joined the men-of-war in their blind fire upon the enemy boats and gallies, although how much effect this had caused could not be calculated, as the night was so dark and the scene so confusing. However, the blazing fire-ships had illuminated a ghostly squadron of men-of-war at the entrance to the bay which was apparently waiting for any of the British ships to cut their cables and put to sea. At daylight these vessels were identified as a ship of the line, two frigates and several xebecs, a force that was under the orders of the venerable Rear-Admiral Don Antonio Barcello. Their retreat into Algeciras later that day was a reward for Captain Harvey and his officers and men who had so successfully repulsed the fire-ship attack.

Reportedly, the British suffered not one loss to their shipping, nor a single casualty during the fire-ship attack, whilst Spanish losses were claimed to number fourteen or fifteen men killed. Three weeks later, the Panther was attacked at night by a number of gunboats, galleys and a xebec, but she drove them off. Shortly afterwards, on 2 July, she was able to slip past Barcello’s squadron and sail for England, where she arrived three weeks later.

Back on the Rock, the shattered remains of the fire-ships were broken up and the surviving timbers proved to be a most useful supply of fuel for the beleaguered inhabitants over the ensuing autumn and winter. This windfall proved to be most welcome, for it would be another ten months before the next relief came in with the arrival of Vice-Admiral George Darby’s fleet on 12 April 1781.