1725- 1804. He was the second of three sons of Commodore Edward Peyton, an officer who died in 1749 having suffered from depression after being criticised by the East India Company, and then been placed under arrest by his successor, for failing to defeat a French force on the Coromandel Coast.

Peyton was commissioned lieutenant of the Essex 70, Captain Richard Norris, on 4 June 1743, and was a witness at the various court martials that sat in 1745-6 subsequent to the British defeat at the Battle of Toulon.

He was promoted commander of the sloop Savage 8 on 23 March 1756, serving in the Downs and the North Sea, and taking the privateer Pluton on 2 February 1757. Having been posted captain on 2 December 1757 he took the Prince George 80 with the flag of Rear-Admiral Thomas Brodrick out to assume command of the Mediterranean in the following spring. On 13 April this ship took fire in the Bay of Biscay but Peyton survived by clinging on to a hen-coop, and he was picked up by the sloop Alderney. Broderick too survived after swimming for an hour, but the tragedy caused nearly five hundred deaths. 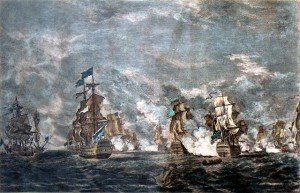 Peyton fought at the Battle of Lagos in 1759

After arriving in the Mediterranean Peyton was flag captain to Vice-Admiral Brodrick aboard the St George 90, and thereafter the Prince 90 in which they fought at the Battle of Lagos on 18 August 1759. He retained the latter vessel through to 1762, serving in the Channel and being employed as flag-captain to Rear-Admiral Sir Piercy Brett during the latter year. He then had the Minerva 28 in North America during 1762-3.

Towards the latter part of 1766 he was appointed to the guardship Belleisle 64 at Plymouth, retaining her until 1770 when he moved to the Modeste 64 during the Falkland Islands dispute with Spain, retaining her but a short while.

Having commissioned the Cumberland 74 in the previous winter, Peyton commanded her at the Battle of Ushant on 27 July 1778, and in April of the following year sat on the court martial of Vice-Admiral Sir Hugh Palliser in the aftermath of the battle. After briefly ceding the command to Captain Hugh Dalrymple in the winter of 1778 he also commanded the Cumberland in the Channel fleet s retreat of August 1779, in the Moonlight Battle of 16 January 1780, and after Captain Harry Harmood had briefly acted for him in the autumn of 1780 he was present at the relief of Gibraltar on 12 April 1781, and in the Channel Fleet campaign of June-November, in the latter part of which he served as captain of the Channel fleet to Vice-Admiral George Darby.

He was advanced to flag rank on 24 September 1787, and in November 1788 he presided over a court martial aboard the Edgar 74 at Portsmouth into charges against Captain George Dawson of the Phaeton 38, relating to tyranny, oppression, malversation, suttling and such like . Sailing out in the following month, he served as commander-in-chief in the Mediterranean for nearly four years with his flag in the Leander 50, Captain Joseph Peyton Junior. During the Spanish Armament of 1790 he despatched ships to watch the Spanish fleets at Cadiz, Ferrol and Corunna. He was promoted vice-admiral on 21 September 1790 and the Leander arrived back at Portsmouth in March 1792.

In early 1794 Peyton was appointed commander-in-chief in the Downs with his flag aboard the bomb Terror, Commander Amherst Morris, and more permanently in the Leopard 50, Captain William Swaffield. However, in May 1795 he was gazetted as second-in-command at Portsmouth, flying his flag initially aboard the Boyne 98, Captain George Grey, and after that vessel was destroyed by fire on 1 May the Glory 98, serving as the president of the court martial of Captain Anthony James Pye Molloy for misconduct at the Battle of the Glorious First of June. He was advanced to the rank of admiral on 1 June 1795, and returning to the Downs flew his flag briefly in the Savage 14, Commander Grosvenor Winkworth , in the spring of 1796 and then permanently on the Overyssel 64, Captain William Swaffield, which was commissioned in July.

In November 1796 Captain John Young became the captain of the Overyssel, and although Rear-Admiral John Bazely temporarily acted as commander-in-chief of the Downs during the winter of 1796-97 Peyton had returned by the time of the North Sea mutiny from 27 May 1797. At one point control of the Overyssel was taken by the mutineers before she found herself under the powerful cannon of the experimental Glatton 53, Captain Henry Trollope, and three days of negotiation resulted in the flagship returning to duty. Captain Young died at Deal in November 1797, but Peyton continued with his flag in the Overyssel with Captain John Bazely, son of the admiral, until he was succeeded by Admiral Skeffington Lutwidge in April 1799. During this time he briefly flew his flag aboard the Wassenar 64, Captain Charles Craven, from February to May 1798.

Peyton died on 22 September 1804 at his seat, Wakehurst Place, near Ardingly in Sussex, which he had inherited from a distant relative in 1776. He was buried in the Wakehurst Chapel in Ardingly Church.

In 1746 he married Katherine, a daughter of Commander John Strutt. She died in February 1794 after having issue five surviving sons and two daughters. Of the sons Joseph became a superannuated rear-admiral, John a rear-admiral, Edward entered the clergy, William became an administrator in the Navy Office and the father of Commodore Sir John Strutt Peyton, and Thomas died in command of the Monarch 74 in 1801.

Peyton was described as an officer who strictly controlled his ship in line with the Articles of War, and a tight hand , harsh and disagreeable, who was on bad terms with Captain Bazely in 1798.