1757-1831. He was born on 15 February 1757, the third son of Captain Broderick Hartwell who became the lieutenant-governor of Greenwich Hospital, and of his wife Rebecca Collins.

Hartwell was commissioned lieutenant on 7 July 1775.

Towards the end of 1777 he assumed command of the troop transport Lord Amherst at Jamaica, but on 16 February 1778 this ship was wrecked on Bermuda whilst returning to England with wounded soldiers. During the following month several Bermudians arrested him for his apparent failure to amply reward them for the assistance they had provided in rescuing his passengers and crew.

He commanded the cutter Rattlesnake 14 from May 1778, in which he served with the Channel fleet, and having had the good fortune to capture a richly-laden French West-Indiaman he was promoted commander on 25 January 1779. Thereafter he commanded the bomb Aetna 8 from March, going out to Africa where he was present at the capture of Goree in April before sailing on to the Leeward Islands and seeing duty at Antigua. 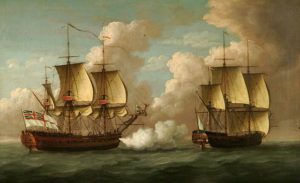 One of Hartwell’s early commands was the French-built frigate Brune, seen in action under British colours.

Hartwell was posted captain on 9 December 1779, and remaining in the Leeward Islands he recommissioned the Sphinx 20 that month before removing in May to the Brune 32. On 12 July he captured the French Renard 18 on that station, the enemy vessel being added to the navy, whilst another capture was the rebel privateer Resolution on 30 November. He later took a convoy out to North America in May 1781 but had left the Brune by the end of the following year.

In the summer of 1786 he recommissioned the guardship Ardent 64, retaining her until February 1788 at Portsmouth. From February 1789 he commanded the Bellona 74 as a guardship at Portsmouth, taking many promising young gentlemen into his midshipmen s berth, and also participating in the Kings Naval Review at Plymouth on 18 August. After further employment in the Channel fleet during the Spanish Armament of 1790 and in the Russian Armament of 1791 the Bellona was eventually paid off in September of the latter year.

In December 1792 Hartwell recommissioned the Thetis 38 with which he took a convoy out to St. Helena. At the beginning of the French Revolutionary War in early 1793 he was in the delightful position of knowing that returning French East Indiamen would be unaware of the outbreak of war, that being under Admiralty orders his ship alone would scoop all of the prize-money in respect of any capture, and that being in the South Atlantic he was perfectly poisoned to make such a capture. Sure enough, two such vessels were made prize and a fortune seemed his destiny, but alas the more lucrative capture lost contact with the Thetis and was retaken by the French, resulting in just a reward of 10,000 for the one ship rather than 50,000 for the both. Hartwell thereafter retained the Thetis throughout 1793 until she was paid off in September, whereupon he retired from active service to take up a number of civil positions.

After a period as commissioner of the Victaulling Board he became the naval commissioner at Sheerness in September 1796. His official residence was used by the Board of Admiralty and the delegates from the mutinous Nore fleet as the venue for a meeting on 27 May 1797, with Hartwell joining the negotiations. He was the commissioner of Chatham dockyard in 1799, and a commissioner without special function from 1 January 1801. In the same year he was clerk of the acts on the Navy Board.

He became a K.B. in May 1802 as a proxy for Lord Keith on the occasion of that officer s investiture as a K.B, and on 26 October 1805 was created the 1st Baronet Hartwell of Dale Hall, Essex. On 18 November 1808 he became deputy controller of the navy, which was a position he held until July 1814.

On 12 May 1781 he married 17 year-old Anne Charlotte Maria, the eldest daughter of Captain John Elphinstone, in Saint Anne Soho, Westminster, London, by who he had four sons, two of whom died young, and a daughter who also died young. His eldest son, Rev. Houlton Hartwell, became chaplain to the Prince Regent, but predeceased Hartwell in 1819. Following his wife s death on 6 June 1809 at Cheltenham, Gloucestershire, Hartwell married 35 year-old Louisa Aldridge on 27 January 1812, by whom he had a daughter. He owned a property at 42 Welbeck Street, London, in the 1790 s

Hartwell was a director of Greenwich Hospital and a colonel of the Deptford and Woolwich volunteers. He was apparently respected and liked by his crews. At the commencement of the French Revolutionary War he was fortunate in having a friend in the first lord of the Admiralty, the Earl of Chatham.