1750-1829. He was born on 12 December 1750, the second son of Admiral John Montagu, and the brother of Captain James Montagu and of Lieutenant-Colonel Edward Montagu of the Indian Army, 1755-99, who was killed in action at the Siege of Seringapatam.

In 1763 Montagu enrolled at the Royal Naval Academy in Portsmouth, and three years later joined the Preston 50, Captain Alan Gardner, bearing the flag of Rear-Admiral William Parry at Jamaica. He moved with Gardner to the Levant 28 in 1769 and returned to England a year later with his father aboard the Bellona 74.

On 14 January 1771 he was commissioned lieutenant of the Marlborough 74, Captain Richard Bickerton, and in February went out to North America with his father, the new commander in chief, aboard the Captain 64, Captain Thomas Symonds. 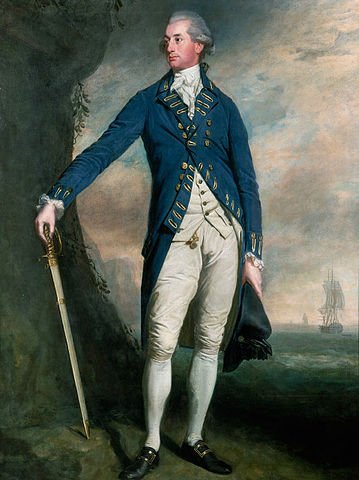 He was promoted commander of the sloop Kingfisher 14 on 9 April 1773 and on 15 April 1774 posted to the Fowey 20. Charged with blockading the ports of Marblehead and Salem, he made the first capture of a ship commissioned by the Continental Congress when he took the Washington 10 in Massachusetts Bay on 5 December 1775. He later assisted in the evacuation of General Sir William Howe s army from Boston and was present at the occupation of New York during July-October 1776 before returning home ill at the end of the campaign. He flew his father s flag aboard the Romney 50, going out to Newfoundland in April 1777 and again in April 1778, and whilst on this station he was ordered to serve under Commodore John Evans in taking possession of the islands of St. Pierre and Miquelon from France.

After returning to England Montagu recommissioned the Pearl 32 in July 1779, and with an inexperienced crew he took the Santa Monica 32 off the Azores on 14 September 1779 in a two hour engagement, losing twelve killed and nineteen wounded. That winter he joined Admiral Sir George Rodney’s fleet going out to relieve Gibraltar, but he had to return to England with the prizes from the capture of the Caracas convoy on 8 January in company with the Africa 64 after losing a foremast, thereby missing the Moonlight Battle off Cape St. Vincent on 16 January 1780. He went out to North America in March 1780 with news of a French expedition, and for a time was the senior officer at New York in the absence of the commander-in-chief. On 30 September 1780 the Pearl took the 32 gun French privateer Esp rance off Bermuda after a five hour duel and chase. Casualties were high, being six killed and ten wounded aboard the Pearl compared to twenty killed and twenty-four wounded aboard the enemy.

Montagu was present at the Battle of Cape Henry on 16 March 1781 where his frigate acted as the repeating vessel. After taking the French privateer Singe on 10 July and the American privateer Senegal 8 on 19 August he had the good fortune to miss the Battle of the Chesapeake, rejoining the fleet on 14 September and shadowing the French before returning to New York on the 25th. Somewhat shattered in health, he returned to England in 1782 with General Sir Henry Clinton a passenger, and the Pearl was paid off in July.

After remaining on half-pay through the peace Montagu was appointed to the Hector 74 during the Spanish Armament of 1790 and he retained her through the Russian Armament of 1791. In command of this ship he acted as the jailer of a number of Bounty mutineers who had rebelled against Captain William Bligh on 28 April 1789, and he also sat on their court-martial in 1792.

Following the declaration of war on 2 February 1793 the Hector formed part of a squadron sent to Guernsey under the orders of Commodore John Colpoys to defend it against the French. In March he sailed for the Leeward Islands with Rear-Admiral Alan Gardner s squadron to participate in an ultimately unsuccessful campaign, returning home in the following January with a convoy from Jamaica to serve for some months under the flag of Rear-Admiral John MacBride in the Downs..

Montagu was promoted rear-admiral on 12 April 1794 with his flag aboard the Hector 74, Captain Lawrence Halsted, being attached to Admiral Lord Howe s Channel fleet. After setting sail on 2 May with the rest of the fleet he was detached to Cape Finisterre with a squadron of six sail of the line and a convoy, and after divesting the latter he undertook the second part of his orders which were to look out for the French provision convoy from America. He failed to discover any trace of this vast fleet of merchantmen but did recapture ten ships from the Newfoundland convoy which had previously been taken by Rear-Admiral Joseph-Marie Nielly. Having returned to Plymouth on 30 May he was ordered to sea again by the Admiralty three days later with nine sail of the line to seek out the vast convoy that had also eluded Lord Howe. Falling in with eight sail of the line on 8 June, he forced them to enter Brest, and the day after spotted nineteen sail of the line to the west. Having no knowledge of Lord Howe’s victory at the Battle of the Glorious First of June he attempted to lure the French fleet away to the south, but bar a desultory chase by a few of their vessels he failed to do so. Returning to Cawsand Bay on 12 June he reported to Lord Howe and the Admiralty who both approved of his conduct. Subsequent commentators were not so kind however, and in the last years of his life he shared a bitter correspondence with Captain Edward Brenton over the latter’s version of these events in his history of the French wars. 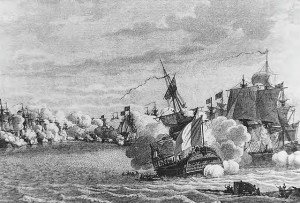 Admiral Montagu was not present at the Battle of the Glorious First of June, but his action before and after defined his career

Shortly after returning to England Montagu became ill, and this indisposition coupled with the grief over his brother’s death at the Battle of the Glorious First of June caused him to resign his position, although he did briefly fly his flag aboard the London 98, Captain Lawrence Halstead. On 1 June 1795 he was promoted vice-admiral, and in March 1799 was offered the command at the Nore which he refused in the hope of obtaining a better station. In the April of the following year he was offered the position of second in command in the Channel fleet by Earl St Vincent, but the Admiralty promoted Vice-Admiral Sir Henry Harvey and Vice-Andrew Sir Andrew Mitchell before him. Following St Vincent’s elevation to the role of first lord of the Admiralty Montagu re-applied once more for employment but was sent a typically insensitive reply stating that ‘an insuperable bar to him being employed in any way, was in place. Montagu ascribed the remarks to his conduct in the affair over the French convoy in June 1794.

In time he was evidentially released from the bar , for after being promoted admiral on 1 January 1801 he was the commander in chief at Portsmouth from 1803-9, generally flying his flag aboard the Royal William 100, Captain John Wainwright, and from 1806 Captain Hon. Courtenay Boyle. He presided over the court-martial on Vice-Admiral Sir Robert Calder subsequent to the Battle of Finisterre on 22 July 1805, and during April 1807 was president of the court-martial into the conduct of Captain Henry Whitby, who whilst in command of the Leander 50 had fired into an American vessel on 25 April 1806.

On 2 January 1815 Montagu was created a G.C.B., and he died on 24 December 1829 at his seat, Stowell Lodge, Wiltshire, being at that time the second most senior officer in the service.

He married his cousin, Charlotte Wroughton of Wilcot, Wiltshire in 1783, and had four sons and five daughters, three of whom predeceased him. His eldest daughter, Georgina, married Admiral Sir John Gore in 1808. Of his sons, George Wroughton became a lieutenant-colonel, John William, born on 18 January 1790 entered the Royal Naval Academy in 1803, was posted captain in 1820, served as flag-captain to Admiral Sir Edward Codrington from November 1839 until March 1841, and reached the rank of admiral, James, born on 10 April 1791, entered the navy with his father aboard the Princess Royal 98 in 1803, was posted captain in 1824 and also reached the rank of admiral, whilst the fourth took holy orders and also predeceased his father.

Montagu was a friend of Admiral Sir Thomas Pasley.