Little is known of Man’s early career, but he was commissioned lieutenant on 26 May 1768, and whilst serving in the Mediterranean where his uncle was the commander-in-chief, he was promoted commander of the Zephyr 10 on 24 June 1776. He was further promoted by his kinsman to post captain on 30 May 1777, and upon commanding the Alarm 32 in the Mediterranean he captured the privateer Chercher Bruit on 16 October 1778 before being paid off in April 1779. 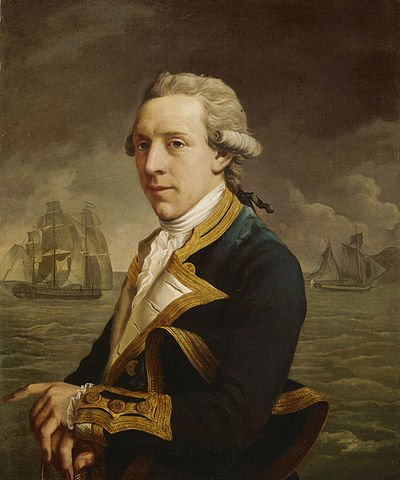 An early portrait of Robert Man

Being appointed to commission the new Cerberus 32 in July 1779, he initially served in the North Sea before going out to join Commodore George Johnstone’s squadron off Portugal in February 1780. In May he fell in with the Spanish Admiral Jose de Solano’s twelve sail of the line and eighty-three transports off Cadiz, whereupon he briefly tracked them to establish that they were proceeding to the West Indies before taking news of their imminent arrival to Admiral Sir George Rodney in the Leeward Islands. Whilst in the West Indies he captured the sloop Arelequin on 6 June, and he then returned to England with Rodney’s despatches, arriving at Falmouth on 2 July.

On 25 February 1781, whilst still commanding the Cerberus, Man easily captured the Spanish Grana 30, Captain Don de Medina, off Cape Finisterre. The Spaniard, which had been on a cruise for over a month, lost seven men killed and seventeen wounded in the action, whilst there were only two men wounded aboard the Cerberus. The Grana was bought into the British service under her same name and rate. On 6 June he assisted the Daphne 20, Captain William Carlyon, in the capture of the Duc d’Estissac. He was employed taking a convoy out the Mediterranean during early 1782, but inadvertently caused Captain Charles Morice Pole to burn his recent capture, the Spanish frigate Santa Catalina which had been taken on the 16 March, when that officer misidentified the approaching Cerberus and a convoy as Spanish reinforcements. Man returned to England shortly afterwards, and in the autumn he commissioned the new Scipio 64, which vessel was paid off in the following year.

During the peace Man commanded the guardship Bedford 74 at Portsmouth from June 1787, participating in the King s Naval Review at Plymouth on 18 August 1789 and retaining her through the Spanish Armament of 1790 and the Russian Armament of 1791 until she was paid off in August of the latter year.

In January 1793 he was reappointed to the Bedford 74, sailing with the Mediterranean fleet in May and serving at the occupation of Toulon from August. On 5 October, having been detached by Vice-Admiral Lord Hood with the Captain 74 and Speedy 14, he came upon the French frigate Modeste 36 at Genoa. Noting that the town’s supposed neutrality had been breached by the heavy presence of French soldiers ashore he warped in alongside and boarded her. He continued in the Bedford during the following year, during which he briefly flew the flag of Rear-Admiral Hyde Parker.

Man was advanced to the rank of rear-admiral on 4 July 1794, raising his flag later in the year aboard the Defence 74, Captain Thomas Wells. In March 1795 he left Portsmouth with nine sail of the line under his command, and with his flag aboard the Cumberland 74, Captain Bartholomew Rowley, to reinforce Vice-Admiral William Hotham in the Mediterranean. Flying his flag aboard the Victory 100, Captain John Knight, from July-September, he led the van at the indecisive Battle of the Hyères Islands on 13 July, but the Victory generated some criticism for apparently being shy of getting into any significant action. On 5 October, having moved the previous month into the Windsor Castle 98, Captain Edward O’Bryen, he was despatched with six sail of the line and two frigates in chase of Rear-Admiral Joseph de Richery who had escaped Toulon with a similar sized force, however, being three weeks behind the French squadron he failed to run them down and instead kept watch on them after they put into Cadiz.

Despite a request to be relieved because of his ill-health and anxiety Man remained in the Mediterranean fleet after the arrival of the new commander-in-chief, Vice-Admiral Sir John Jervis. In July 1796 he left his station off Cadiz to join Jervis off Corsica, thereby releasing Rear-Admiral de Richery who sailed to cause mayhem at Newfoundland during August. In the meantime, Man was chastened back to Gibraltar by Jervis to collect stores for his division, having negligently believed that Jervis’ ships would have been able to supply him.

On 1 October, whilst off Cape de Gata, his squadron consisting of seven sail of the line, three transports and a brig were sighted and chased by the Spanish fleet of nineteen sail of the line under the command of Admiral Don Juan de Langara. After entering Gibraltar with the loss of the brig and a transport, Man briefly cruised off Cape St. Vincent during October before calling a conference of his captains. Regrettably the ensemble decided that as the Spanish fleet had gone east their best course of action lay in returning to England, although this decision was taken despite Admiral Jervis having ordered Man to rejoin the fleet at San Fiorenzo.

Man’s flight from the Mediterranean station was universally condemned, and after arriving home in December he was ordered to strike his flag, never to serve afloat again. It left Jervis without the services of a third of his fleet to tackle the Spanish, although in the event he defeated them at the Battle of St. Vincent on 14 February 1797.

Despite his error Man was never brought to a court martial, and somewhat surprisingly he was employed as a junior naval lord commissioner of the Admiralty from September 1798 until February 1801. In accordance with seniority, he was also promoted vice-admiral on 14 February 1799, and admiral on 23 April 1804.

Nelson thought him a ‘good man’, but as he had a tendency to hypochondria and nerves he was clearly unsuited to high command, and indeed Jervis did not consider him worthy of his position.