c1722-1798. He was descended from a noble Scottish family, being related to the Earl of Stair, and the only son of Robert Dalrymple who inherited the Kinloch estate.

Dalrymple was commissioned lieutenant on 1 February 1756, and having commanded the sloop Hazard s Prize 8 from November 1756 was officially promoted commander on 23 March 1757, being engaged in convoy duty and cruising. In August he removed to the sloop Albany 14, and he was posted captain of the Sphinx 20 on 18 October 1758, bringing her home from Jamaica and paying her off.

He next joined the Solebay 24, serving in Commodore Sir Piercey Brett s squadron in the North Sea and Downs during 1759, in which year he also brought home a convoy from Emden. On 31 January 1761 he assisted the Amazon 20, Captain Basil Keith, in the capture of the Dunkirk privateer Chevert 18, which they had driven aground and then brought off from under a battery near Calais. Later that year he was appointed to the Winchester 50, going out to West Africa in November and remaining on that station for a couple of years before transferring to the Leeward Islands and eventually being paid off in July 1764. 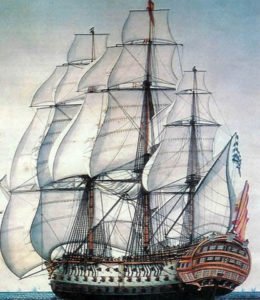 After a long period of unemployment Dalrymple recommissioned the Union 90 in December 1778, commanding her in the Channel fleet from 1779, and being involved in the August retreat and the campaign of June-December 1780. In January 1781 he and Captain Sir Digby Dent formed a court of Inquiry which found Captain Evelyn Sutton of the Isis 50 not guilty of misconduct or cowardice in his failure to sufficiently engage the Dutch Rotterdam 50 on 31 December. This judgement was considered to be erroneous and Sutton was later reprimanded by a court-martial.He commanded the Union at the relief of Gibraltar on 12 April 1781, and in the Channel fleet campaign from June to November, and he was with Rear-Admiral Richard Kempenfelt s squadron when it brilliantly attacked the Comte de Guichen s convoy on 12 December.

Continuing in the Channel fleet, Dalrymple sat on the court martial enquiring into the loss of the Royal George 100 on 29 August 1782, and although in poor health he commanded the Union 90 at the relief of Gibraltar on 18 October, losing lost five men killed and fifteen wounded after being heavily engaged with the Santisima Trinidad 130 at the subsequent action off Cape Spartel. At this time he apparently could not understand the new signal system employed by Vice-Admiral Lord Howe and was therefore appointed an acting-lieutenant, Philip Durham, who could. After the relief of Gibraltar the Union was ordered out to the West Indies, whereupon Dalrymple resigned his command as it was considered his fragile health would being unable to withstand that climate.

He was advanced to flag rank on 24 September 1787, and was based at the Nore during the Spanish Armament of 1790 with his flag aboard the receiving ship Sandwich 90, Captain Thomas Tonkin. He later flew his flag aboard the Dictator 64, Captain Tonkin, from April to September 1791 in which month his unfortunate flag-captain died after being struck down by an attack of palsy

Dalrymple became a vice-admiral on 1 February 1793, served as commander-in-chief at the Nore with his flag once more on the Sandwich 90, Captain James Mosse, from 1793 until he was succeeded in March 1795, and was promoted admiral on 1 June 1795.

He died in Manchester Square, London, on 10 October 1798 after many years of poor health.

In 1765 Dalrymple married Eleanor, the daughter of General Sir Charles Howard of St. George, Hanover Square, London, and they had issue at least one son.

He was a fellow of the Royal Society, and his residence was given as St. James in the City of Westminster.