With the navy stretched to the limit in Europe and the Americas, there soon arose a shortage of trained seamen to man the ships of the fleet, and one officer who would suffer from the deficit in crew numbers and quality was Captain Evelyn Sutton of the Isis 50.

Being ordered to sail from the Nore to Spithead at short notice in December, Captain Sutton was sixty-six men short of his full complement of three hundred and fifty, and of those he did have aboard the majority had no experience of the sea and many could not speak English. Under such circumstances his last wish would have been to fall in with a Dutch man of war of equal force, but when this happened off Beachy Head on 31 December, he determined to fulfil his duty by bringing the other vessel, which would later prove to be the Rotterdam 50, to action.

The Isis had been launched at Chatham six years earlier and boasted an armament of twenty-two 24-pounders on her lower deck, twenty-two 12-pounders on her upper deck, and six 6-pounders on her quarterdeck and forecastle. This battery had been supplemented by two 24-pounder carronades and eight 12-pounder carronades. In the early part of the war she had been based in North America prior to fighting at the Battle of St. Lucia at the end of 1778 and returning home with a convoy in the summer of 1779 to join the Channel fleet. She had then undergone a refit at Woolwich before being re-commissioned by Captain Sutton in November 1780.

The Rotterdam was a much older ship, having been built in the early 1760’s. She too had a nominal crew of three hundred and fifty men, and she carried twenty-two 18-pounders on her main deck, twenty-two 8-pounders on her upper deck, and six 6-pounders on her quarterdeck and forecastle. Her broadside weight of metal thus totalled 293 pounds, which was somewhat inferior to that of the Isis’ 486 pounds. She was under the command of Captain Anthony Johan van Volbergen, and she was bound for the West Indies.

The action that followed was particularly unmemorable, for having fired an opening broadside the Isis rapidly moved into close quarters with her opponent, whereupon the Rotterdam allegedly struck her colours. But then events quickly moved beyond Sutton’s control, for as soon his ship ran alongside the Dutchmen his men fled their posts in utter confusion, causing him to concentrate fully upon the safety of his own ship, and particularly in dealing with the large number of cartridges that had been left unattended on the gun deck by the crew’s flight. Taking advantage of the disorder, the Rotterdam was able to sail away without further hindrance. 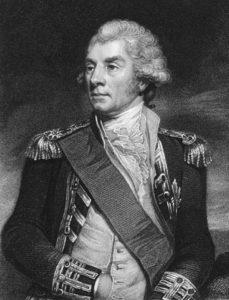 Admiral Lord Keith, who as Captain Hon. George Keith Elphinstone captured the Rotterdam after the Isis had failed to do so.

When the Isis reached Spithead on 2 January, Captain Sutton wrote to the commander-in-chief, Admiral Sir Thomas Pye, advising that he had engaged a Dutch ship of 60 or 64 guns on his passage thither. The next day he wrote again to request an investigation into his conduct, and as a result the Isis was subjected to a court of inquiry led by Captains Sir Digby Dent of the Repulse 64 and John Dalrymple of the Union 90. Reporting on 6 January, they advised that they had found Sutton not guilty of any misconduct or cowardice in his failure to capture what they described as his 64-gun opponent.

If Captain Sutton thought this was to be the end of the affair then he was sadly mistaken. Having subsequently been engaged by a British ship of the line and two cutters from which she had escaped with the assistance of a couple of French privateers, the Rotterdam fell in with the Warwick 50, Captain the Hon. George Keith Elphinstone, on 5 January 1781. This ship was also short-handed, with many of her men being away on prize crews, but those that were left aboard were of a far different mettle to the crew of the Isis, and the Warwick easily captured the Rotterdam without incurring a single casualty.

As soon as the Warwick brought the Rotterdam into port it was established that her Dutch prize was the same vessel that had been engaged by the Isis. The Admiralty realised that it could not ignore the subsequent disquiet that questioned the Isis engagement, and notwithstanding his earlier acquittal, Captain Sutton was brought to a court-martial presided over by Rear-Admiral Sir John Lockhart-Ross aboard the Warspite in Portsmouth Harbour.

Captain Sutton’s defence rested on the inexperience of his crew, the absence of any marines, the fact that his men had not yet been quartered or exercised at the guns, their inability to manoeuvre the ship, the failure of many to understand the English language, their panic under fire, and the no small matter of his being short-handed by sixty-six men with another fifteen on the sick list. Nevertheless, on 22 January he was found to have been highly reprehensible for his misconduct in ‘not doing his utmost to take or destroy the Dutch man-of-war’ and in ‘the precipitate manner in which he carried his ship alongside the enemy’. In mitigation, it was accepted that his failure had arisen ‘from the inexperience of his officers, and the weak and undisciplined state of his ship’. The verdict from the court was that Captain Sutton be issued with a reprimand but be allowed to retain his ship.

No doubt to Captain Sutton the verdict seemed unfair, but it was nothing to the treatment he would presently suffer at the hands of the despicable Commodore George Johnstone, when following his infamous action in the Cape Verde Islands on 16 April 1781 Johnstone would scapegoat Sutton and keep him in long confinement pending a court-martial which would acquit him.