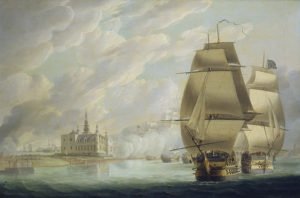 In 1801 Captain Peyton died on board HMS Monarch, here depicted at the Battle of Copenhagen a few months earlier.

During the Spanish Armament in 1790 he commanded the sloop Bulldog 16 in the Mediterranean where his father was the commander-in-chief, being sent to collect forty merchantmen from Barcelona for escort to Gibraltar, and then being stationed off Cadiz to watch over the Spanish fleet. He was posted captain on 18 November 1790, whereupon he appears to have joined the Aquilon 32, remaining on the Mediterranean station. In April 1791 the Aquilon captured a smuggler off the Scilly Islands whilst returning home from Gibraltar.

In August 1794 he was appointed to the Ceres 32 which had returned to Plymouth from the West Indies, and whose captain, Thomas Hamilton, had gone ashore for the restoration of his health. The Ceres crew were not so pleased with the appointment, for they petitioned the Admiralty to have both Peyton and his first lieutenant removed from the ship.

In July 1795 he recommissioned the Minerva 38 at Portsmouth, departing in December with a small squadron to cruise in the Bay of Biscay, and serving in Captain Sir Richard Strachan s squadron in the Channel where he assisted the Melampus 36, Captain Graham Moore, in the destruction of the Etonnant 18 off Barfleur on 13 November 1796. The Minerva arrived back at Portsmouth in December, and she came out of dock after slight repairs in the following February to venture out on a cruise.

In October 1797, after Peyton had left his ship which was refitting at Portsmouth, he was fined 450 guineas for knocking a tailor s head through his shop window during an argument about Peyton s earlier attempt to enter the man s daughter s room by the use of a rope ladder in the dead of night, one that the daughter had secured to a bed post.

In early 1801 he was appointed to the de Ruyter 68 in the Thames, and from July he commanded the Monarch 74, briefly flying Rear-Admiral Sir Thomas Graves flag off the Texel. In September the Monarch departed Sheerness for a cruise off Goree.

Captain Peyton died on board the Monarch on 2 October 1801, and when she returned to Yarmouth two days later his body was taken ashore to be given a funeral with full military honours.