1753-1826. He was born on 13 September 1753 in Portugal, the son of a port merchant, William Warre of Oporto and Bradford, and of his wife Elizabeth Whitehead of Ashton-under-Lyme.

Warre entered the service as a prot g of Commodore George Johnstone, being present at the Battle of Porto Praya on 16 April 1781 and receiving his commission as a lieutenant with seniority from 23 July.

He later served as the first lieutenant of the Trusty 50, Captain William Wolseley, flying the broad pennant of Commodore Phillips Cosby in the Mediterranean from 1786, on which station he was promoted commander of the Kingfisher 18 on 1 December 1787. In May 1788 he was sent home with Commodore Cosby’s dispatches reporting that a Spanish fleet of twenty sail of the line had come into the Straits of Gibraltar. After returning to the Mediterranean and dispatching a report on the state of the French fleet at Toulon to the Admiralty, Warre took the Kingfisher back to Portsmouth in July 1789 where she was briefly quarantined.

During the Spanish Armament of 1790 Warre commanded the Swan 14 in the Channel before being posted captain on 22 November. He then saw service with the Portuguese Navy, returning to England aboard the flagship of Vice-Admiral Jose Sanches de Britto whose squadron was attached to the Channel fleet in the summer of 1793. 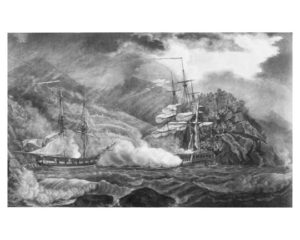 The capture of the Brutus by the Mermaid.

In June 1794 he joined the Mermaid 32, going out to the Leeward Islands in May 1795 where on 10 October he captured the French brig Brutus 10 off Grenada after driving both her and his own command ashore in the chase. The Brutus crew of fifty men, in addition to seventy soldiers, escaped ashore. Four days later he came up with and took her consort, the R publicaine 18, after a thirty-minute engagement which saw the latter vessel lose twenty men killed, capturing in the process a French general and his staff who were in passage to Grenada. During the engagement the Mermaid suffered casualties of one man killed and three wounded. Warre left the Leeward Islands aboard the packet Earl of Sandwich at the end of the year.

In August 1796 he was appointed to the Adamant 50, in which he departed Portsmouth at the end of September with the Lisbon and Mediterranean convoys. On the return voyage the convoy he was escorting to England was dispersed in bad weather, but he took both a lucrative Spanish prize and a French transport carrying three hundred troops that had become detached from Rear-Admiral Joseph De Richery s squadron bound for North America. Shortly after arriving in England Warre was succeeded by Captain William Hotham in command of the Adamant and he saw no further service.

He became a superannuated rear-admiral on 31 August 1810 and after retiring to East Barnet, Hertfordshire, he died on 21 November 1826.

In his retirement Warre was a regular contributor to charitable causes.