1758-98. He was born on 23 April 1758 and baptised at Netherbury in Dorset, the second son of Samuel Hood of Kingsland, Dorset, who had been a naval purser, and of his wife Anne Bere. He was the younger brother of Lieutenant Arthur Hood, who was lost in the Leeward Islands on the foundering of the sloop Pomona, Commander Timothy Eastwood in 1775, and the elder brother of Vice-Admiral Sir Samuel Hood. His father was the first cousin of Admirals Viscount Hood and Viscount Bridport.

After joining the navy aboard the yacht Katherine, commanded by his cousin, Captain Alexander Hood, he served from 1767-70 aboard the Romney 50, Captain John Corner, flying the broad pennant of his other cousin, Samuel, in North America. From 1772-5 he sailed with Captain James Cook aboard the Resolution on the great explorer s second journey around the world.

In 1776 Hood went out to North America under Vice-Admiral Lord Howe s patronage and on 18 July 1777 was promoted lieutenant of the Raisonnable 64, Captain Thomas Fitzherbert. On 14 March 1780 he was given command of the recently purchased cutter Ranger 10 by Vice-Admiral Marriott Arbuthnot, and early the following year he sailed for the Leeward Islands where on 17 May 1781 he was promoted commander by Admiral Sir George Rodney, the Ranger being rated a sloop and renamed the Pigmy to accommodate this promotion. 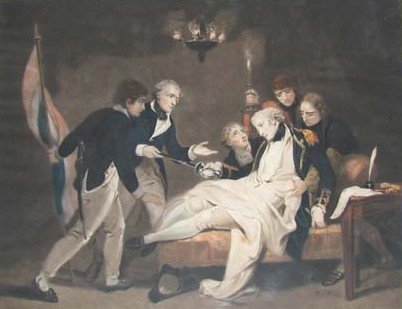 The Death of Captain Alexander Hood

On 27 July 1781 he was posted captain, serving on the Barfleur 98 as flag captain to his cousin, Rear-Admiral Sir Samuel Hood. Retaining this position he fought at the Battles of Chesapeake Bay on 5 September, and at St. Kitts on the following 25/26 January 1782. On 4 February he was appointed to the frigate Champion 24, and he commanded her at the Battle of the Saintes on 12 April where she acted as a repeating vessel, and then under his cousin in the squadron sent to the Mona Passage where he captured the corvette Ceres 18 amongst the French stragglers. Returning to Port Royal he was appointed to the prize Aimable 32, and after sailing for North America with the fleet in July he returned with her to England in the summer of 1783 where she was paid off in July.

Following the peace Hood visited France at the invitation of the Comte de Vaudreuil, who was the uncle of the commander of the Ceres, Captain Baron de Paroy. During the Spanish Armament of 1790 he commanded the frigate Hebe 38 in the Channel, which frigate he had recomissioned in January, and he retained her until she was paid off in March 1792.

At the commencement of the French Revolutionary War in 1793 Hood found himself once more in command of the Hebe, participating in the Channel fleet cruise from October – December before he joined the Audacious 74 in July 1794, which ship went out to the Mediterranean in May 1795. Hood did not retain the command for long, as he was invalided home due to poor health and was not re-employed until 1797.

Initially, on 7 January 1797, he was appointed to the Ville de Paris 110, but he never joined this vessel. Unfortunately his new ship, the Mars 74, which he joined on 22 February, was prominent in the mutiny at Spithead from 16 April and Hood was one of those captains sent ashore by his men on 11 May. After rejoining her at the end of the mutiny, and still being attached to the Channel fleet, the Mars fought an action with the French Hercule 74 in the growing dusk off the Bec du Nez on 21 April 1798. After a ferocious two and a half hour engagement fought at yardarm to yardarm the Hercule struck her colours with three hundred and fifty casualties. The Mars had ninety men killed and wounded including Hood himself, who fell early in the duel from a musket ball in the thigh and survived only long enough to be handed the French captain s sword.

Captain Hood s body was brought ashore with full military honours followed by a burial at Butleigh in Somerset and the erection of a monument to his memory.

He married Elizabeth Periam of Butleigh on 11 July 1792 and had one son who succeeded to Vice-Admiral Sir Samuel Hood s baronetcy, and one daughter, whilst another child died in his first year. Two of his grandsons became admirals, and one was to serve as the first naval lord of the admiralty.

Hood always had a poor constitution, and was unassuming and diffident, although in his early days he was seen as a clever, steady young man . Many of the naval nobility sought a place in his midshipman s berth for their children.