1759-1801. He was born in London on 29 April 1759, the fifth son of the politician, Francis Seymour Conway, first Marquess of Hertford, and of his wife Isabella Fitzroy, the youngest daughter of the 2nd Duke of Grafton. He was the father of Admiral of the Fleet Sir George Francis Seymour, and of Lieutenant-Colonel Hugh Henry Seymour and Colonel Sir Horace Beauchamp Seymour.

He was educated at an eminent school for sons of the aristocracy at Greenwich, and as the Hon. Hugh Seymour Conway he entered the service in 1770 aboard the yacht William and Mary. Moving to the Pearl 32 in April 1771 under the patronage of a distant kinsman, Captain Hon. John Leveson-Gower, he served off Newfoundland. Thereafter he saw further duty aboard the Portland 50, Captain Andrew Barkley, which went out to the Leeward Islands in March 1773 to become the flagship of Vice-Admiral Sir George Brydges Rodney and returned home under the captaincy of Samuel Marshall in the late summer of 1774.

After a brief stint aboard the armed transport Royal Charlotte, Seymour Conway joined the Alarm 32, Captain John Stott, serving in the Mediterranean where for a short interim he was employed aboard the Trident 64, Captain Charles Ellys, the flagship on that station of Rear-Admiral Sir Peter Denis. On 10 August 1776 he was commissioned lieutenant of the Alarm, and he remained with her under the successive captaincies of William Hay and Robert Man in the Mediterranean. 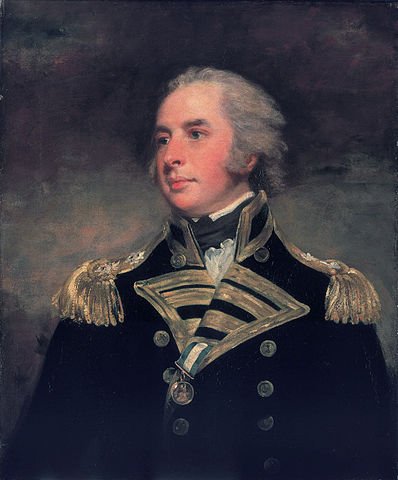 After a brief stint aboard the armed transport Royal Charlotte, Seymour Conway joined the Alarm 32, Captain John Stott, serving in the Mediterranean where for a short interim he was employed aboard the Trident 64, Captain Charles Ellys, the flagship on that station of Rear-Admiral Sir Peter Denis. On 10 August 1776 he was commissioned lieutenant of the Alarm, and he remained with her under the successive captaincies of William Hay and Robert Man in the Mediterranean.

On 18 June 1778 Seymour Conway was promoted commander of the newly commissioned xebec Minorca 18, which had been built on the island of that name, and on 8 February 1779 he was posted captain of the sloop Porcupine 24, serving in the Channel and then going out to the Mediterranean in December with Admiral Sir George Rodney’s fleet for the relief of Gibraltar, being present at the Moonlight Battle off Cape St. Vincent on 16 January 1780. He then briefly commanded the Diana 32 in the Channel fleet, and from August the Ambuscade 32 on the same station, in which he participated in the fleet campaign of June-December, the second relief of Gibraltar on 12 April 1781, and the Channel fleet campaign of June-November 1781.

He next joined the Latona 38 in November 1781, although Captain James Burney acted as her temporary commander for the next three months during a cruise to Norway. After returning to duty Seymour Conway took the privateer Bernardin in the Channel on 25 April 1782 and served at the third relief of Gibraltar on 18 October, during which expedition he was sent ahead by Admiral Lord Howe to reconnoitre, and where his frigate and four storeships were the only vessels to get into Gibraltar at the first attempt.

Being paid off following the end of hostilities in 1783, Seymour Conway shared a house in Conduit Street with his brother George and the riotous Captain John Willett Payne, spending much wasteful time drinking and socialising in the company of the Prince of Wales. This rakish existence was fortunately curtailed with his marriage on 3 April 1786 to Lady Anne Waldegrave.

During the Spanish Armament of 1790 he joined the Canada 74, but after being struck on the head by a lead whilst taking soundings he was later taken ill and was forced to retire to the country for almost a year to recuperate, being replaced by Captain Erasmus Gower.

In February 1793 Seymour Conway was appointed to the newly commissioning Leviathan 74, part of Vice-Admiral Lord Hood’s Mediterranean fleet which went out in May, and he served at the occupation of Toulon from 27 August. Having been sent home overland with despatches he briefly returned to the Leviathan in the Mediterranean before joining the Channel fleet. The day before the Battle of the Glorious First of June his command was rescued by the flagship, Queen Charlotte 100, when she was in danger of losing her foremast and had already lost the use of her wheel. On the day of the battle the Leviathan performed very well, especially in battering and dismasting the Amerique 74, but she suffered casualties of ten men killed and thirty-three wounded. Seymour Conway’s part in the action was rewarded when he was appointed a colonel of marines on 4 July. Following the mutiny on the Culloden 74, Captain Thomas Troubridge, he was sent aboard with Captain Hon. Thomas Pakenham to speak with the delegates and bring them back to duty.

Upon the death of his father in early 1795 he dropped the name Conway and became, simply, Seymour. In March he was appointed a lord of the admiralty, but he continued his service at sea and operated out of Portsmouth whilst still holding this post until 1798. From the spring of 1795 he commissioned, captained and then having been promoted rear-admiral on 1 June flew his flag aboard the Glorious First of June prize Sans Pareil 80, Captain William Browell, and he was on that vessel at the Battle of Groix on 23 June where she was one of the first ships into the action, suffering the largest casualties in the fleet of ten men killed and two wounded.

In December 1796 the Sans Pareil collided with the Prince 98, Captain Thomas Larcom, during the Channel Fleet’s failure to get to grips with the French invasion force of Ireland, and in April 1797 Seymour took four sail of the line and two frigates into the Atlantic to undertake a long but ultimately unsuccessful search for a Spanish treasure convoy of more than five million dollars worth that was homeward bound from Havana. Although he missed out on the capture, that pleasure later falling to the Irresistible 74, Captain George Martin, and Emerald 36, Captain Velters Berkeley, off Spain, his absence at sea fortunately meant that he avoided the Spithead mutiny which erupted on 16 April. Earlier, in his capacity as a lord of the Admiralty, Seymour had been asked by Lord Howe to investigate petitions raised by the disaffected men of the fleet. When his squadron returned to port, he managed to quell uprisings aboard the Révolutionnaire 38, Captain Francis Cole, and Stag 32, Captain Joseph Yorke, but he could not prevent Captain Erasmus Gower of the Triumph 74 being turned out of his ship. By 1 June, at which time Seymour was ashore, the Sans Pareil was in the Downs with four other sail of the line which were all deemed to be loyal and could therefore be sent to either reinforce Admiral Adam Duncan off the Texel or be used against the mutineers.

On 14 February 1799 Seymour was promoted vice-admiral, his squadron remaining on detached duty off Brest until the summer. He then went out to the Leeward Isles in the Tamar 38, Captain Thomas Western, to succeed Vice-Admiral Sir Henry Harvey as commander-in-chief with his flag aboard the Prince of Wales 98, Captain Adrian Renou, arriving in August and somewhat controversially superseding all bar one of his predecessor’s acting-lieutenants. On 20 August, supporting troops under the command of Lieutenant-General Thomas Trigge, his squadron consisting of the flagship Prince of Wales, the Invincible 74, Captain William Cayley, and five frigates took Surinam with the tacit approval of the Dutch colonists. Shortly afterwards he returned to the Sans Pareil which had come out from England under the command of Captain Charles Penrose with a convoy.

In 1800, despite his wish to return home, Seymour was transferred to the Jamaican station as the commander-in-chief, but during the summer of 1801 he was taken ill with yellow fever. After a temporary recovery he died aboard the fireship Tisiphone 8, Captain John Davie, off Jamaica on 11 September, having been sent to sea for the sake of his health after it had taken a dramatic turn for the worse ten days earlier. His body was returned to England for burial aboard the schooner Sting 6, Lieutenant Thomas Thrush, and being landed at Portsmouth it was afforded full military honours, the chief mourner being the commander-in-chief, Admiral Mark Milbanke. Almost to the same day that he died his wife, who in 1798 had travelled to Madeira for the benefit of her health, also died in Bristol from the effects of fever.

Seymour married Lady Anne Horatia Waldegrave, the third daughter of the 2nd Earl of Waldegrave and his wife Maria Walpole, who after the earl’s death married into the Royal family and became the Duchess of Gloucester. He had issue five sons, one of whom predeceased him, and two daughters. Following the premature deaths of both their parents the children enjoyed the guardianship of Lord Hertford, although the Prince of Wales’ mistress, Maria Fitzherbert, who had already been looking after the youngest daughter Mary retained her until 1803 and provided for her in her will.

A religious man, Seymour was considered to be worthy of the station to which he had been elevated by his birthright, being popular and respected, and convivial but not familiar with his officers. Youthful in appearance, tall, handsome and with impeccable manners, he was the M.P. for Newport, Isle of Wight from 1784-6, Tregony, Cornwall from 1788-90, Wendover, Buckinghamshire, from 1790-6, and Portsmouth from 1796 until his death, although he did not actively engage in politics. He also held positions in the household of his friend, the Prince of Wales. As a lord of the Admiralty, he advanced the wearing of epaulettes, having felt under-dressed when mixing with French Royalists at Toulon in 1793, and he was a close friend of the first lord of the Admiralty, Earl Spencer.