c1752-1828. He was born to an undistinguished family from Hawkchurch, Devon.

Domett entered the service in 1769 under the patronage of Captain Alexander Hood, and he served for the next three years in the Leeward Islands aboard the Quebec 32, Captain Francis Reynolds. In 1773 he returned to England, and after the Quebec was paid off he joined the sloop Scorpion 14, Captain George Keith Elphinstone, in which he served on the Mediterranean station from September 1772 until the summer of 1774. After returning to England once more he was accepted into the Marlborough 74, Captain Samuel Hood, the flagship of Vice-Admiral Sir James Douglas at Portsmouth.

Shortly afterwards he moved to the Surprise 28, Captain Robert Linzee, going out to Newfoundland in May 1775 and being employed aboard her as a master s mate. After returning home that winter, as was the custom, the Surprise sailed from Plymouth in the following spring under Captain Charles Douglas orders to effect the relief of Quebec on 6 May 1776. Whilst on the Newfoundland station Domett removed as an acting-lieutenant to the Romney 50, Captain George Montagu, the flagship of Vice-Admiral John Montagu, and upon returning to England he was commissioned lieutenant on 27 December 1777 aboard the Robust 74 under his patron, Captain Alexander Hood. 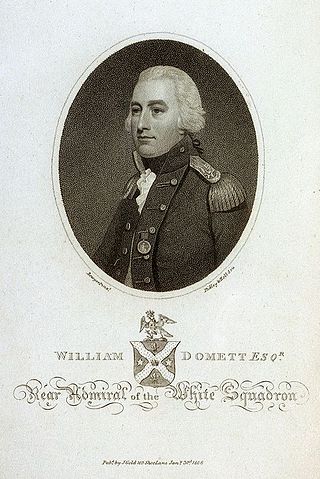 He fought at the Battle of Ushant on 27 July 1778 and was still in the Robust under Captain Phillips Cosby when she led the line at the Battle of Cape Henry on 16 March 1781. Shortly afterwards he moved into the Invincible 74, Captain Sir Charles Saxton, in which ship he fought at the Battle of Chesapeake Bay on 5 September, whereupon he was seconded by Rear-Admiral Sir Samuel Hood onto his flagship, the Barfleur 90, Captain Alexander Hood, to serve as his signal officer at the Battle of St. Kitts on 26 January 1782 and the Battle of the Saintes on 12 April. When Hood captured four French ships in the Mona Passage following the latter battle Admiral Sir George Brydges Rodney promoted Domett commander of one of the prizes, the sloop Ceres, and he returned in her with despatches to England.

He was posted captain on 9 September and became flag captain to Rear-Admiral Alexander Hood aboard the Queen 98, serving at the Relief of Gibraltar and the Battle of Cape Spartel in October 1782. This vessel was paid off in April 1783.

Throughout the early years of the peace Domett remained unemployed, but in June 1786 he recommissioned the Champion 24 to become the senior officer at Leith. During the Dutch Armament of 1787 he fitted out the London 98 as the flag-ship of Vice-Admiral Alexander Hood, and upon that dispute being settled he briefly reverted to a life on the beach before taking the Pomona 28 out to West Africa and the West Indies after recommissioning her in May of the following year. Upon returning to England in 1789 he was appointed flag-captain to Vice-Admiral Mark Milbanke aboard the Salisbury 50 for the Newfoundland station in May.

During the Spanish Armament Domett was briefly flag-captain to Vice-Admiral Sir Alexander Hood aboard the London 98 which he recommissioned in June 1790, and on 10 October he was appointed to the Royal Sovereign 100, which he paid off at Plymouth on 4 December. Having immediately joined the frigate Pegasus 28 in December he took her out to Newfoundland in the following June, returning to England at the end of 1791 and being appointed the flag captain of Rear-Admiral Samuel Goodall aboard the Romney 50 from March 1792, which vessel sailed for the Mediterranean in June.

At the commencement of hostilities with France in 1793 he once more became flag captain to Vice-Admiral Sir Alexander Hood, this time aboard the Royal George 100, and he participated in the fruitless Channel Fleet cruises from July-August and October-December. Remaining with the Channel fleet he fought at the Battle of the Glorious First of June in 1794 where the Royal George was badly damaged in the days before the main action, and where she lost twenty men killed and seventy-two wounded in the engagements. During the Battle of Groix on 23 June 1795 his command forced the surrender of the Tigre 74, suffering six men wounded in the process, and Domett was given the honour by Hood, now the ennobled Viscount Bridport, of being sent home with despatches. He was later aboard the Royal George during the period of the Spithead mutiny from 16 April 1797.

Continuing with the Royal George, Domett served as the flag-captain to Rear-Admiral Charles Pole in July 1799 at the blockade in the Aix Roads of five Spanish sail of the line which had joined the Brest fleet in its cruise from April to August, and subsequent to Bridport s retirement he served as the captain of the fleet to Admiral Lord St. Vincent in the Channel from August to the end of October 1800. He next commanded the newly commissioned French prize Belleisle 74 in the Channel until February 1801, during which period he was honoured with a colonelcy of marines on 1 January.

In the spring of 1801 he was appointed captain of the fleet to Admiral Sir Hyde Parker for the campaign against the Northern Powers. Initially believing that Copenhagen should not be attacked, he eventually came around to Vice-Admiral Lord Nelson s point of view and exercised some influence over Parker to allow the second-in-command to undertake the Battle of Copenhagen on 2 April. Nevertheless his cautious advice to Parker persuaded the commander-in-chief to make his signal of recall to Nelson when it was felt that the battle was in danger of being lost, a signal that the vice-admiral famously ignored. Domett remained as captain of the fleet to Nelson following the departure of Sir Hyde Parker, and he returned with the vice-admiral to England in June. 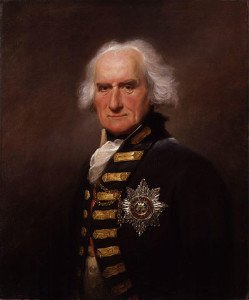 Domett was the long-term follower of Admiral Viscount Bridport

In October 1801 Domett was appointed captain of the fleet to Admiral Hon. William Cornwallis in the Channel, initially aboard the Belleisle 74, Captain John Whitby and later with both officers aboard the Ville de Paris 110, also serving in the Channel. During the peace from 1802-3 Domett was the senior officer and commodore in Ireland with his broad pennant aboard the Dryad 36, Captain Robert Williams, and following the resumption of hostilities he resumed his position as captain of the fleet to Cornwallis in the Channel.

On 23 April 1804 he was promoted rear-admiral, and in July he took passage for Plymouth aboard the Spartiate 74, Captain Sir Francis Laforey, prior to assuming command of the squadron off Ostend as the replacement for the sickly Commodore Sir William Sidney Smith. In the event he had not even hoisted his flag at Sheerness aboard his prospective flagship Antelope 50, Captain Lord William Stuart, before Smith returned to duty.

Being in poor health himself Domett remained ashore, and later in 1804 he joined the commission that was set up to revise the navy s civil affairs. During the summer of 1805 he was due to take up an appointment in the Channel fleet with his flag aboard the Glory 98, Captain Samuel Warren, but his poor health prevented him from doing so. On 9 January 1806 he was a pallbearer at Vice-Admiral Lord Nelson s funeral, and in the spring of 1808 he joined Lord Mulgrave s Board of Admiralty. Remaining in this position, he was advanced to the rank of vice-admiral on 25 October 1809, and became the first naval lord under Viscount Melville in 1812.

In October 1813 Domett relinquished his role at the Admiralty to become the commander-in-chief at Plymouth with his flag aboard the Salvador del Mundo 112, Captain Robert Hall, and from 1814 the Impregnable 98 with the same officer. At the beginning of 1815 he had to resign the command following an injury to his left foot which left him lame for several years, and he was not actively employed thereafter.

Admiral Domett died at his estate in Hawchurch, Devon on 19 May 1828.

He never married but a nephew, Joseph Symes, entered the navy and earned promotion to commander after serving as the first lieutenant of the Bonne Citoyenne at the capture of the en flute French frigate Furieuse on 6 July 1809. Another of his nephews, Lieutenant William Domett, was lost with another sixteen men when the schooner Vigilant blew up in 1804 under his command.

During his seven year command of the Royal George Domett moulded her into a well-disciplined, effective fighting vessel. He was regarded as a safe pair of hands, experienced, and a first-rate administrator and subordinate, particularly to his patron, Viscount Bridport.