1756-1839. He was born on 20 April 1756 at Bucklebury, Berkshire, the second son of the Reverend John Trollope and his first wife, Anne Guyon. His brother, Lieutenant-Colonel Thomas Trollope, commanded the marines aboard Admiral Adam Duncan s flagship Venerable 74 at the Battle of Camperdown, his half-brother George Trollope, fought as a lieutenant on the Triumph 74 at the Battle of Camperdown and was posted captain in 1814, and another half-brother, Captain Arthur Trollope of the 40th Regiment, died whilst fighting the French in the Netherlands on 19 September 1799.

In April 1771 Trollope entered the navy aboard the Captain 64, Captain Thomas Symonds, which ship flew the flag of Rear-Admiral John Montagu in North America. After coming back to England in 1774 he went out to that station once more aboard the Asia 64, Captain George Vandeput. He fought with the army at the Battles of Lexington and Bunker Hill, and spent some time off Virginia aboard the sloop Kingfisher, Captain James Montagu. 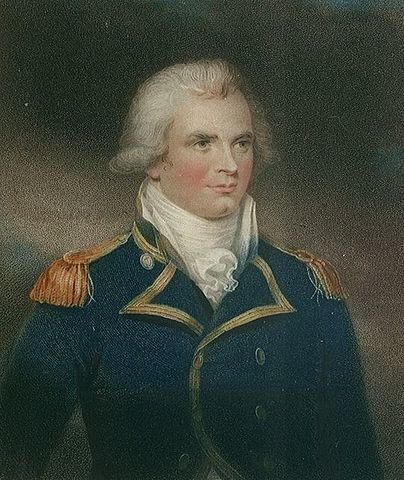 After rejoining the Asia in 1777 he returned to England, and on being promoted lieutenant of the Bristol 50, Captain John Rayner, on 25 April, he again went out to the North American station. He led the Bristol s boats up the North River in an attempt to reach Lieutenant-General John Burgoyne s army, and after returning to New York he rejoined the Bristol in which he attended the expedition which captured Philadelphia on 25 August. Captain Hon. William Cornwallis subsequently assumed command of the Bristol, and in March 1778 Trollope came home with this officer aboard the Chatham 50, the entire crew of the Bristol having been turned over to that vessel.

He was promptly given command of the Kite, a recently purchased ten-gun cutter based in the Downs, in which he captured three times as many enemy ships as his consorts, many of them Dutch. As he was serving under Admiralty orders Trollope received a healthy amount of prize-money, including a staggering 30,000 for the capture of two vessels that had been carrying seasoned ship-timber. On 30 March 1779 he defended thirty merchantmen which were under attack by a large French privateer, exchanging broadsides with the bigger vessel before it withdrew to snap up an easier and more profitable merchant prize. Whilst the Kite was undertaking repairs a French 18-gun privateer engaged her, but Trollope fought this vessel off too, knocking over her main-mast, apparently inflicting forty-five casualties in return for nine men wounded, and reducing her to a wreck, although the disabled condition of his own command prevented him from attempting to board her.

On 16 April 1779 he was promoted commander upon the recommendation of Admiral Sir Thomas Pye, the commander-in-chief at Portsmouth, and retaining the Kite until 1781, which vessel had been up-rated to a sloop, he served off Ireland, in the Channel fleet, and under Vice-Admiral George Darby during the relief of Gibraltar on 12 April 1781. Having enhanced his reputation with the prompt delivery of Admiral Darby s despatches to the Admiralty, Trollope was posted by Lord Sandwich to the somewhat experimental Myrmidon 22, which he commissioned for North Sea service on 4 June.

In March 1782 Trollope joined the Rainbow 44, another experimental vessel carrying carronades, and one for which his particular talents were thought well suited. Despite encountering many difficulties in the manning of this vessel he eventually sailed from the Nore in September and joined Commodore John Elliott s squadron off St Malo. In the early morning of 4 September the Rainbow came upon the new French frigate H b 40 off the Isle de Bas. Amazingly her astonished commander, Chevalier Pierre Joseph de Vigny, surrendered after the first massive shot from the Rainbow destroyed his wheel, surmising that if the British ship s forecastle guns alone could inflict so much damage then the rest could undoubtedly do more. This feeble defence by the French captain ultimately led to his being cashiered and sentenced to fifteen years imprisonment. Having been denied any further opportunity to properly test his experimental command, and after remaining so long at sea as to have been given up for lost by the Admiralty, Trollope paid the Rainbow off following the peace in March 1783.

With the prize money earned from his various cruises Trollope was able to live a comfortable life near the sea in Carmarthenshire for the next eight years, and on one occasion he provided succour to a French crew whose ship had gone aground off the coast. During the Spanish Armament of 1790 he commanded the Prudente 38, having earlier advised the first lord of the Admiralty that he would have accepted a 28-gun frigate at once rather than wait for a better opportunity, and following the end of the dispute he moved to the Hussar 28, going out to the Mediterranean. This commission ended in early 1792 when she was ordered to fit out for Halifax, Trollope preferring to hand over command to Captain Rupert George after charges laid against him by a lieutenant had been partly proved at a court-martial in November, resulting in him being reprimanded.

For the next few years he lived at his Welsh country mansion, being surprisingly unable to procure any employment in the early stages of the French Revolutionary war. Once Lord Chatham had left the Admiralty he was appointed in May 1795 by the new incumbent, Lord Spencer, to one of several ex-Indiaman bought into the service, the particular vessel being the Glatton 56, which was fitted out with a battery of carronades. Trollope personally directed the arming of the ship at the Nore despite protestations from Sir Andrew Snape Hamond at the Navy Board over the time the fitting out was expected to take, and in the event he had her ready for sea before any of the other vessels, all of which were then consigned to the Transport Service.

Serving with Admiral Adam Duncan s North Sea fleet, Trollope often spent time on detached duty off the coast where on one occasion he despairing observed a stronger Dutch squadron make its way into the Texel without regard to his own ship and two other 64 s. In February 1796 he led a squadron of three 64 s and three frigates, which were later joined by two 74 s, in the chase of two Dutch 64 s, a 54 and two further vessels of 40 cannon apiece off the Texel. On the point of bringing them to action he was superseded by the appearance of Rear-Admiral Thomas Pringle, who considering five undefined ships accompanying the Dutch to be 50-gun vessels rather than the Indiamen supposed by Trollope, prevaricated so long over an action as to lose the opportunity completely. These Dutch ships were subsequently captured in Saldanha Bay by Vice-Admiral Sir George Keith Elphinstone on 17 August 1796.

On 15 July 1796 Trollope drove a squadron of enemy ships including four frigates and two corvettes from Helvoetsluys into port and thereby ensured the safety of some three hundred merchantmen which were sailing in convoy to the Baltic with a sloop, being duly rewarded by the merchants of London and Russia. A cruise off the Shetlands followed, and having returned to London he was ordered at short notice to take command of the Leopard 50 from Captain William Hargood and sail with four frigates to protect Cuxhaven on the North German coast, which port was under threat from the French. He wintered off the Elbe River through bitter icy weather before returning to the Nore and the Glatton in the spring of 1797.

Trollope, commanding the Russell 74, played a prominent part at the Battle of Camperdown in 1797

On 27 May 1797 the general mutiny reached the North Sea fleet, and although the men of the Glatton had no complaints with regard to Trollope, they feared the wrath of the other vessels should they fail to declare for the mutineers. Trollope argued with the ringleaders for four hours on 2 June whilst the Glatton was lying becalmed off Harwich, and after persuading them to return to their duty with a mixture of coercion and reason the Glatton reached the Downs on the next day. Slipping alongside Admiral Joseph Peyton s flagship, the Overyssel 64, and also the Beaulieu 50, Trollope restored her men to the colours after threatening to fire into them. Upon rejoining Admiral Adam Duncan off the Texel he received a letter from Lord Spencer, the first lord of the admiralty, extolling his services and appointing him to the Russell 74, which had been conspicuous at the Spithead mutiny.

Having restored the Russell to order, Trollope kept watch over the Texel, and it was he who redirected the lugger Spectator to Yarmouth with news for Admiral Duncan of the putting to sea of the Dutch fleet. During the subsequent Battle of Camperdown on 11 October he forced the surrender of the Jupiter 74 and the Delft 54, and then of the Wassenaar 68 which had re-hoisted her colours, suffering casualties of seven men wounded in return. When the fleet returned to the Nore after the battle he was, as the senior captain, appointed to the yacht Royal Charlotte at Greenwich and ordered to convey the King on his to visit the victorious men. They tried to sail on 30 October but over two days they were unable to proceed beyond Gravesend because of adverse winds, so the yacht returned to Greenwich where Trollope was knighted on her quarterdeck.

He returned to the Russell in early 1798 and remained with her in the Channel until the spring of 1799. Thereafter he served in the Channel with the Juste 80 from the summer of 1799, returning with her to Portsmouth for a refit in April 1800.

He was promoted rear-admiral on 1 January 1801, but having previously fallen out with the intractable Lord St. Vincent, who it was proved had given him contradictory written and verbal orders, Trollope s opportunities for further employment diminished once this officer became first lord of the admiralty. His health began to deteriorate, and such was the onset of gout that by 1805 he had lost the use of his limbs. A written testimonial of his services was referred to the Admiralty, but he was refused a pension.

Having been promoted vice-admiral on 9 November 1805 and admiral on 12 August 1812 he did not serve again, although after ten more years of suffering his affliction eased. He was nominated a K.C.B. on 20 May 1820 and a G.C.B. on 19 May 1831, but his gout returned with a vengeance in the early 1830 s whilst living at Freshford near Bath. He gradually became deranged, being in fear that his house was about to be broken into, and he loaded his bedroom with a blunderbuss, two pistols and a knife that were ready for action. It was with one of the former that he committed suicide on 2 November 1839, to be buried in St James s Church at Bath.

Trollope married Fanny Best from Surrey in the early 1780 s, but she died in 1816 having left no issue.

He was renowned for his kindness, as demonstrated when his brother, an army officer, was released from captivity by a French officer who had been Trollope s prisoner on the Hebe and was keen to return his generosity. Subsequently the Frenchman was taken prisoner at Portsmouth from where Trollope secured his release. For many years he lived in Wales, having purchased a castle. As a young commander of the Kite he reflected on his good fortune in taking so many prizes by saying that if you will keep the sea as much as the Kite does, you may have the same good fortune. He was highly regarded for his gunnery skills and being an early proponent of the carronade.