Died1803. He was the only son of Walter Pringle, a wealthy plantation owner of St. Kitts, and his wife, Eleanora Lidderdale of Roxburgh, Scotland.

He was commissioned lieutenant on 30 November 1760 and saw much early service with Captain Hon. Samuel Barrington.

Whilst employed on the North American station as the senior lieutenant of the Lizard 28, Captain John Hamilton, he left Quebec on 22 November 1775 aboard the Bristol-bound Polly with despatches from Major-General Sir Guy Carleton for Lord George Germaine in London warning of the impending colonial attack on that town. He returned to Quebec in command of the armed ship Lord Howe, and at the Battle of Lake Champlain on 11-12 October 1776 he commanded the British flotilla, being aboard the Maria with General Sir Guy Carleton in the action with the Americans led by Benedict Arnold. Pringle subsequently received a great deal of criticism from three lieutenants, including John Schanck, both for his shy performance in the battle and for his subsequent letter to the Admiralty claiming all the glory. 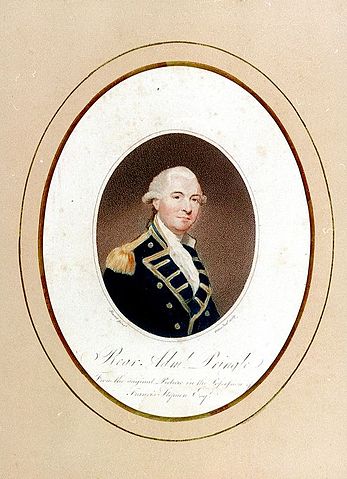 Upon returning to England after the battle aboard the Fowey 24, Captain George Montagu, he was immediately posted captain on 25 November 1776 and commissioned the new Ariadne 20 at Chatham in January, sailing with the Lisbon and Gibraltar trade at the end of March, and reporting back in April that one vessel had refused to obey his signals, and as a consequence was believed captured by the enemy. He then continued on to the Leeward Islands in March 1777, on which station he captured the American privateer Musquito 14 from Virginia after a nine hour chase, taking her into Barbados at the beginning of June. Another capture was the privateer Johnston on 29 November.

On 9 March 1778, being in consort in Barbadian waters with the Ceres 18, Commander James Richard Dacres, he captured the American privateer Alfred 20, whilst the rebel’s consort, the Raleigh 32, fled the scene, throwing guns and stores overboard in order to lighten herself. In the same year the Ariadne took an 8-gun privateer schooner and drove two more ashore on Guadeloupe. Pringle was afterwards present at Rear-Admiral Hon. Samuel Barrington’s defence of St. Lucia on 15 December 1778, having come in ahead of d’Estaing flying the signal enemy in sight , and continuing in the Ariadne he was present at the Battle of Grenada on 6 July 1779, before returning home with Barrington.

Back in England, Pringle commissioned the new Daedalus 32 at Liverpool in May 1780, being engaged in convoy duty to Cork and taking a convoy out to North America in May 1781. After leaving Quebec on 20 October but being delayed for three weeks by contrary winds in the St. Lawrence, he eventually reached Cork with thirteen ships under convoy in December. Thereafter he saw service in the Channel, capturing the privateer Moustic on 20 January 1782, and in April he went out to North America with a convoy in company with Captain Horatio Nelson’s Albemarle 28. Returning once more to Europe, the Daedalus took the privateer Légère du Dunkerkque 8 off Mount’s Bay, Cornwall, on 11 December

Following the peace in 1783 Pringle recommissioned the Daedalus at Portsmouth in May, and a spell with the Shetlands Fishery followed before she was paid off in July 1784. During the Dutch Armament in the autumn of 1787 he commissioned the new sail of the line Impregnable 98 for the flag of Admiral Hon. Samuel Barrington, and from the end of October 1787 until April 1788 commanded the Hero 74 as a receiving ship at Chatham. During the Spanish Armament of 1790 he was flag-captain to Barrington aboard the new Royal George 100, receiving his commission in May.

In February 1793 Pringle kissed the King s hand on being presented to His Majesty, and in June he was appointed to the Valiant 74 in which he fought well in breaking the French line at the Battle of the Glorious First of June in 1794, badly damaging the Achille, suffering two men killed and nine wounded, and being one of those captains honoured with a gold medal.

Pringle was promoted rear-admiral on 4 July 1794, on which occasion he was again presented to the King, and in the early summer of 1795, with his flag flying aboard the Asia 64, Captain John M’Dougall, he took a squadron out to Norway, during which voyage one of his ships, the Edgar 74, Captain Sir Charles Henry Knowles, was badly afflicted by gaol fever. In August he brought the Comte d’Artois and his suite into the Margate Roads and was then ordered to take the French Royal around to Spithead. During October the Defiance 74, Captain Sir Grieg Home, mutinied whilst Pringle’s squadron was replenishing at Leith, and although no less an officer than Captain William Bligh took active steps to resolve the dispute Pringle did little to enhance his own reputation by displaying a great deal of prevarication. In February 1796 his small squadron in the North Sea came upon a Dutch force which, bound as it was for the Cape, deferred from an action, and he surprisingly did nothing to force one.

In April 1796 Pringle was appointed commander-in-chief in the East Indies, and on 1 May he sailed from Spithead with his flag flying aboard the Tremendous 74, Captain John Aylmer. He joined Vice-Admiral Sir George Elphinstone’s squadron on arrival at the Cape and instead of sailing on to the East Indies he acceded to the command of that station in October, having been present when Elphinstone captured a number of Dutch ships in Saldanha Bay on 17 August. With Aylmer returning home with despatches Captain Charles Brisbane joined the Tremendous as flag-captain, retaining this position for but a short while before exchanging with Captain George Hopewell Stephens of the Oiseau 38.

Whilst commanding at the Cape in October 1797 Pringle was faced by a mutiny in his squadron which was put down with the help of the army, men aboard his flagship Tremendous having been the instigators. Captain Stephens himself was one of the officers put ashore, and when Pringle struck a compromise whereby the officers would be allowed back but put on trial if the men had a case against them Stephens asked for a court-martial. He was acquitted, his accusers were then arraigned for mischievous behaviour and Pringle gave the crew two hours to hand them over. Following the subsequent court-martials on these mutineers a number of men were hung. Captain Stephens was conveniently sent home with despatches and Charles Brisbane was recalled to become Pringle’s flag captain once more, and the officers returned home aboard the frigate Crescent 36 in May1798.

He was well-regarded and liked by Nelson but had an aversion to serving officers getting married. He himself never married and was prone to speak disparagingly of women. At the time of his death, he owned the estate of Weens and Bonchester in Hobkirk, Roxburgshire, Scotland.