1750-1799. He was born in London on 25 March 1750, the second son of Sir Charles Frederick, who served as the M.P for Queenborough from 1754-84 and was the surveyor-general of the Ordnance from 1750-82. His mother, Hon. Lucy Boscawen, was the ninth daughter of Lord Falmouth and the sister of Admiral Hon. Edward Boscawen.

Frederick entered the Navy in 1768 after receiving a good education, particularly in mathematics. He was commissioned lieutenant on 12 March 1770 and promoted commander of the Spy 14 on 11 October 1776. In August 1777 he took a convoy out to Jamaica, but his command was wrecked off Newfoundland during the dark hours of 16 June 1778. He next commissioned the newly launched sloop Fairy 14 at Deptford in October, retaining her until August 1779 although he was on leave of absence when she captured the privateers Dunkerquoise on 24 May and Marauder on 19 June. 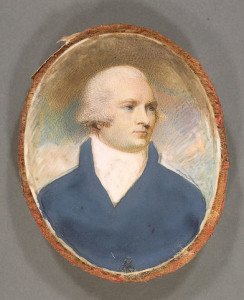 After being posted captain on 14 July 1779 Frederick commissioned the frigate Unicorn 20, being sent to cruise off Ireland shortly afterwards, and then seeing service off the Dutch coast in October and undertaking a secret mission during November. On 10 January 1780 his command arrived at Cork with the escort for the West India convoy, and she reached Montego Bay, Jamaica, on 24 March where she remained through the summer whilst engaging in further convoy duty. On 4 September the Unicorn was captured by two French sail of the line and a frigate off Tortuga, although this loss was not without a conspicuous resistance, with Frederick losing four men killed and thirteen wounded. She would later be recaptured as the Licorne 20 by the Resource 28, Captain Bartholomew Rowley, on 20 April 1781 in the West Indies.

Following a brief imprisonment on Martinique Frederick was exchanged, and he arrived back in London on 18 June 1781 after taking passage home aboard the Egmont 74, Captain Robert Fanshawe, which had escorted home the Jamaica convoy but been forced to sail around the north of Scotland to avoid a French fleet that was believed to be in the Channel. He returned to duty, being ordered to commission the new Diomede 44 at Bristol in October. On 13 February 1782 four men tried to escape the ship after seizing a boat, and upon refusing to obey the orders to return one was shot and killed, another was wounded, but the other two escaped. The Diomede reached Plymouth in March and set out for North America from St. Helens in June with a convoy, being fortunate to evade capture by the allied fleet after separating from Vice-Admiral John Campbell’s Newfoundland-bound convoy. Reaching New York via Charleston on 30 September, she captured the heavy rebel American frigate South Carolina 40 on 20 December in company with the Quebec 32, Captain Christopher Mason, and Astrea 32, Captain Matthew Squire, after an eighteen-hour chase. Frederick remained with the Diomede through to December of the following year when after departing New York on the last day of September she was paid off.

On 20 May 1790 he commissioned the new Romulus 44 at Portsmouth during the Spanish Armament, and on 5 July his new command went out of harbour to Spithead. Two weeks later she departed for Plymouth with troops, but orders for her to proceed to the West Indies were then countermanded and she arrived back at Portsmouth at the end of the month. On 25 August the Romulus’ launch overset in squally conditions at Spithead with all but two out of eleven men eventually being saved by the boats of the Cyclops 28, Captain James Cotes. At the end of the month she sailed for Ushant under the sealed orders of Captain Charles Morice Pole of the Melampus 36, and they returned on 1 October having followed instructions to reconnoitre the French fleet in Brest. Two weeks later the Romulus put out again under sealed orders which again proved to be the monitoring of the Brest fleet, and in early November she entered Falmouth with the Melampus. Come December she was at Portsmouth where one man was killed when she was struck by lightning during a thunderstorm,

In April 1791 the Romulus sailed for Guernsey to collect wine and spirits for the fleet, and during May she was based in the Downs. Towards the end of June she was engaged in the Impress service, in July she sailed from the Downs for Portsmouth, and she then proceeded to Plymouth with money for the dockyard workers. She was back at Portsmouth by 6 August, and after coming into harbour on 3 September she was paid off shortly afterwards.

In January 1793, with war against France once more imminent, Frederick recommissioned the Illustrious 74 at Plymouth, going around to Portsmouth at the beginning of April, and then sailing from Spithead for the Mediterranean with Rear-Admiral Phillips Cosby’s division on the 22nd of that month. From August Frederick was present at the occupation of Toulon, and he later commanded the Illustrious at the siege of Bastia during the Corsican Campaign, which had commenced in February 1794.

Remaining with the Mediterranean Fleet, the Illustrious fought at the Battle of Genoa on 13/14 March 1795, being in the fore of the action and losing all but her lower foremast, together with twenty men killed and seventy wounded, including Frederick himself. She was later taken in tow by the Meleager 32, Captain George Cockburn, but in increasingly bad weather she parted company five days later, her jury masts tumbling overboard. Later that day the pilot ran the Illustrious ashore between Spezzia and Leghorn where she was set on fire, the men being rescued by other ships of the fleet. For a third time in his career Frederick faced, and survived, a court martial into the loss of his ship.

Whilst travelling home overland from Leghorn he visited a sister living in Italy, and he reportedly arrived in London from France on 12 May. Within weeks he was appointed to the Blenheim 98 in succession to the promoted Captain John Bazely, which vessel was already serving in the Mediterranean Fleet, and he raised a commodore’s broad pennant at Leghorn towards the end of the year. Reverting to a captain in the Mediterranean Fleet under the new commander-in-chief, Admiral Sir John Jervis, Frederick commanded the Blenheim at the Battle of Cape St. Vincent on 14 February 1797, providing excellent support to the Culloden 74, Captain Thomas Troubridge, and causing a great degree of damage to the Santisima Trinidad 130. During the engagement she lost twelve men killed and forty-seven wounded, this being the second heaviest casualty figure in the fleet.

Frederick was promoted rear-admiral on 20 February 1797, and on 25 March he left the Tagus and returned home to England with Jervis’ dispatches for the Admiralty, arriving in London on 13 April. After remaining on half-pay until the beginning of November, he hoisted his flag aboard the Flora 36, Captain Robert Gambier Middleton, and sailed for Lisbon with a convoy at the end of December. Upon arriving in the Tagus in January 1798 he transferred his flag to the hospital ship Dolphin, Commander Josiah Nesbit; however, by now he was in very poor health and although he did recover enough to transfer his flag in February to the Blenheim, Captain Robert Campbell, he spent some time in command at Gibraltar, living ashore whilst he battled his illness.

In the autumn of 1798 he transferred to the Princess Royal 98, his flag-captain being John William Taylor Dixon, and this vessel participated in the pursuit of Vice-Admiral Eustache Bruix’s fleet following it’s breakout from the Brest on 25 April 1799, Frederick’s health continued to decline however and the Princess Royal took him back to Torbay in September.

Admiral Fredrick survived but a further month and he died in Nottingham Place, London, on 8 November 1799.

He married Annie Greigson at Stoke Damarel, Devon, on 2 June 1773 and although the marriage bore no issue he did have many young followers and relatives in the service. His nephew, Thomas Lennox Prescott, served with him on the Romulus, Blenheim and Princess Royal, and was promoted commander in 1839.