1740-92. He was born on 11 July 1740, the second son of John Leveson-Gower, the 1st Earl Gower, who served as the privy seal from 1742-3 and again from 1744-55, by his third wife Mary Tufton, the daughter of the 6th Earl Thanet and the widow of the courtier Anthony Grey, Earl Harold. He was by almost twenty years the younger half-brother of the politician Granville Leveson-Gower, the 1st Marquess of Stafford, who did much to advance his career.

Having received a private education Leveson-Gower joined the Navy and was commissioned lieutenant on 18 November 1758. He was rapidly promoted commander in July 1759 and had the fireship Salamander under the orders of Admiral Hon. Edward Boscawen at Gibraltar, being present at the Battle of Lagos on 18 August. In February 1760 he was placed in command of the sloop Kingfisher which was refitting at Portsmouth, but which he probably never took to sea. 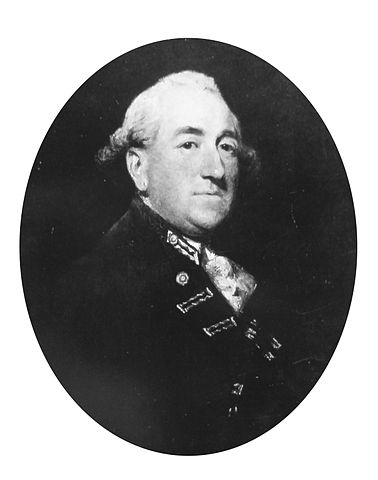 On 30 June 1760 he was posted captain of the frigate Flamborough 24, serving off Lisbon, and from her he transferred just two months later to the Quebec 32, being employed in the Mediterranean until the peace, during which period he captured the French privateer Phoenix 18 off Cape Palos on Christmas Eve 1760. The Quebec was paid off in June 1763.

In October 1776 Leveson-Gower was appointed to the Valiant 74, cruising successfully against rebel trade in the Bay of Biscay, and on 27 July 1778 he fought at the Battle of Ushant. Following the resulting political dispute over Admiral Hon. Augustus Keppel s management of the battle he was one of those officers who sided with their commander and he resigned his commission in March 1779.

After the change of government he returned as a commodore and captain of the fleet to Admiral Lord Howe in March 1782, serving aboard the Victory 100, Captain Henry Duncan, and participating in the April -August cruises before sitting on the court-martial into the loss of the Royal George on 29 August. He was later present at the relief of Gibraltar on 18 October and the subsequent action with the Spanish off Cape Spartel.

From January until April 1783 Leveson-Gower was a junior lord of the Admiralty under Admiral Lord Howe, with who in March he toured the disaffected ships at Portsmouth following the delay in paying off those crews not required for peacetime service. He was again a junior lord of the Admiralty under Lords Howe and Chatham from December 1783 until August 1789. On 15 June 1785 he kissed the King s hand upon being promoted commodore and entrusted with the care of Prince William Henry, and he carried his broad pennant aboard the Hebe 38, Captain Edward Thornbrough, for a cruise around Great Britain with the young royal, reaching the Orkneys in July. In 1787 there was much speculation over several months that he would accede to the East Indies command with a force of six sail of the line, but instead he raised his broad pennant aboard the Edgar 74, Captain Charles Thompson, to command a squadron of observation during the Dutch Armament, although in the event this force did not put to sea.

On 24 September 1787 he was promoted rear-admiral, and in the following June again hoisted his flag on the Edgar 74, Captain Thompson, cruising for two months in the Channel with six sail of the line and two frigates. During the Spanish Armament of 1790 he was initially captain of the fleet to Admiral Lord Howe aboard the Queen Charlotte 100, Captain Sir Roger Curtis, but from August flew his flag aboard the Illustrious 74, Captain Alexander Edgar, in command of a division of the fleet. The Russian Armament of 1791 saw him employed under Vice-Admiral Lord Hood with his flag from June aboard the Formidable 98, Captain Henry Nicholls.

Leveson-Gower died of an apoplectic fit whilst shaving at his residence, Bill-Hill, near Wokingham in Berkshire on 15 August 1792, and he was buried at Barkham Church.

On 5 July 1773 at St. George s Church, Truro he married Frances, the daughter of the great Admiral Hon. Edward Boscawen, by whom he had five sons including John, born a year later, who became a general and politician, Edward, who retired as a rear-admiral, and Augustus, who drowned as a captain in 1802. He also had two daughters, whilst his youngest son took holy orders. His last six children were all born at Titsey Hill, Oxted from 1776-1787. He inherited Bill-Hill on the death of his mother in 1785 after she had purchased the estate as a widow, and he added the nearby Barkham House estate two years later. Leveson-Gower was the M.P. for Appleby from 1784-90, and then Newcastle-Under-Lyme, which he represented until his death.

Generally known as Leveson, he was a staunchly loyal follower of Admiral Keppel and the Rockingham sect, and was one of the leading officers to refuse to serve the Lord North administration following the political fall out arising from the Battle of Ushant. He was the patron of Vice-Admiral Sir Samuel James Ballard.

He was reputed to be a pleasant man to those he liked, but sported a ferocious temper that particularly afflicted those he did not. He was unpopular with his subordinates, being somewhat prone to bullying, particularly in bringing an off-duty watch up on deck for no valid reason other than to keep them on their toes. An early riser, his rage was none the better for it, nor was his language. He was not afraid to bad-mouth his subordinates for their plumpness, and in 1785 abused John Bazely, one of his midshipmen, for having the misfortune to be the son of Admiral Sir Hugh Palliser s flag-captain.