Mutiny on the Janus and Disaffection at Portsmouth – March 1783

Following the ending in January of hostilities with all of Britain s enemies bar the Netherlands, a significant number of ships returned to port with crews who were looking forward to being paid off and returning to their families. As was human nature the men did not expect there to be any delays in this process, but given the vast numbers of ships to be de-commissioned it was no surprise that the Navy Board struggled with the necessary administration. Thus when political and uninformed agitators began fermenting trouble by suggesting that crews were being detained so that their ships could be sent back overseas some of the men at Portsmouth, Plymouth, and Sheerness began to display mutinous behaviour.

Admiral Lord Howe, the first lord of the Admiralty.

As early as February complaints had been received at the Admiralty of the favourable treatment of Irish volunteers who had been brought into the service by Captain John MacBride, and who had been allowed to go home whilst other British sailors were still waiting to be paid off. The officers of the ships involved tried to placate the men by representing that it was their honour and good fortune to be retained when so many sailors would be thrown unemployed on to the beach, but notwithstanding their flattery it took a visit to Portsmouth by Admiral Lord Howe, who on 28 January had taken over the position of first lord of the Admiralty, to pacify the men.

But as the weeks drifted by the de-commissioning continued at a snail s pace, and soon up to a dozen vessels were showing signs of disaffection. In particular a most serious situation was developing aboard the Janus 44 at Spithead. This vessel had first been commissioned by Captain Bonovier Glover in the spring of 1778, and she had gone out to Jamaica later that year. Glover had died of natural causes during the action off Monte Cristo on 20/21 March 1780, and although Captain Horatio Nelson had been recalled to Jamaica to replace him it was soon established that the future hero was too sickly to take up the appointment. Captain William O Hara had then taken on the ill-feted ship, and she had remained on the Jamaican station until coming home to be refitted at the end of 1782.

Following their long and arduous service on such an inhospitable station the crew of the Janus had every expectation that as a result of the peace they would be one of the first ships to be paid off. But by the early days of March word had reached the men that she was in fact to be refitted and ordered back to sea, and thus they resolved to disobey all orders from their officers and to refrain from duty. Expecting that this disobedience would be met with force, the men formed a barricade with their hammocks up forward, loaded a couple of 18-pounder cannon with grape shot, and pointed these aft.

At the time of this insurrection Captain O Hara was not aboard although most of his officers were, and to no avail they pleaded with the men to return to duty. Soon the captain appeared on the shore and requested a boat but the seamen refused to man one, telling the officers that they could use the long-boat only if the marines took to the oars. Eventually O Hara did get aboard and assembled the men, yet upon his somewhat injudiciously advising them that the Janus was to be sent to the North American station they angrily dispersed below. Here, in a far more belligerent mood, they lighted the matches for the cannon and resolved to resist their position with all force.

As well as being confronted by angry seamen parading through the streets of the town carrying bludgeons and threatening the peace, the port admiral, Sir Thomas Pye, had been attempting to deal with the insubordination on other ships. With the situation on the Janus spiralling out of control he now sent an express to the Admiralty requesting urgent assistance and upon its receipt Lord Howe decided that his personal presence was required once more to calm matters. Arriving post haste at Portsmouth on 16 March, the first lord immediately took a boat out to the Janus at Spithead and let it be known that he wished to come aboard and address the men. Typically the honest Tars greeted him with the normal courtesy, pomp and ceremony, whereupon he addressed them from the quarterdeck. 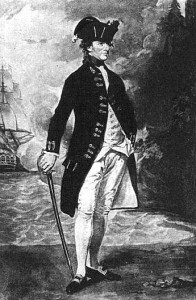 Sir Hyde Parker had his own method of dealing with any potential mutineers.

Howe had always been regarded by the common seamen as the Sailors Friend , and the speech he proceeded to deliver proved worthy of the title. Lacing fatherly advice with praise, admonition and encouragement in equal measure, he chided them for resorting to a mutinous conduct that was unbecoming of the gallant men they were, expressed his disappointment that they could resort to such behaviour when they knew that he would have been doing his best to attend to their interests, and took them to task for not approaching him with their grievances in a responsible and reasonable manner. He then concluded by stating that, notwithstanding his predecessor s plans, it was his intention to pay off every ship in port, and he was only sorry that such a gallant crew as that of the Janus could not be kept in commission.

Needless to say this was just what the men of the Janus wanted to hear, so they gave Lord Howe three cheers and the salutation was echoed by the other ships nearby. They then returned happily to their duty and began to accept their officer s orders once more. The first lord took the opportunity to visit the other ships present with his former captain of the fleet, Commodore Hon. John Leveson-Gower, and he was advised of grievances that included unhappiness on ships that were being sent to the East Indies, and a desire that advance payments should be made to any ships going foreign. The next day he returned to London to appraise the government and the King of the seamen s concerns.

Yet notwithstanding the fact that many captains seemed to have gone ashore, there remained little urgency in the de-commissioning process for their men, and finding that the promise of a discharge did not materialise over the next few days the seamen became increasingly fractious; indeed it was all that Pye and the senior admiral of the rump of the Channel fleet, Rear-Admiral Alexander Hood, could do to keep a lid on matters. Although it was understood that most crews would continue to do their duty but refuse to put to sea, rumours emanated from the Ganges 74, and Proselyte 32 that the men were prepared to run those ships aground and destroy them. Both Hood and Pye received threatening letters, and some from the Portland 50 addressed to Pye were so militant that Hood had to go aboard her to pacify the crew. Captain Sir Hyde Parker was less conciliatory, for when up to a hundred men refused their duty aboard his command, the Goliath 74, he threatened to flog and hoist the offenders to the main mast. His crew soon acquiesced, and in company with the Cambridge 80, whose men had previously been placated by Hood, and the Bombay Castle 74 she sailed for Plymouth where the vessels would be paid off.

Aboard the Janus the men again resorted to disobedience and made preparations to defend their position. Matters almost came to a head on the evening of 26 March when the sail room caught alight, apparently by accident, and the blaze was only extinguished amongst great confusion. Fortunately a letter from Lord Howe arrived the next day informing the men that the delay in paying them off was due to the coin not having arrived from London, but if they were so anxious to leave then they could be issued bills. This the men agreed to, and shortly afterwards, on 30 March, the Janus entered Portsmouth Harbour to be paid off, being joined there by up to twenty other ships over the next two days.

IIt wasn t the end of the disaffection however, for a few months later the Raisonnable 64, Captain Lord John Augustus Hervey, returned to Portsmouth from duty in the Leeward Islands and was ordered around to Chatham to be decommissioned. Furious at this prevarication, and the fact that having embarked at Portsmouth they would have to return overland to the town to receive their money, the men rebelled on 18 June, and in demanding to be paid off in Portsmouth Harbour they appointed their own officers, and attempted to unmoor the ship and fire a gun for a pilot, being prevented from doing so only by Hervey’s threat to kill that man who first dared to do it By now Viscount Keppel had returned as first lord of the Admiralty in place of Howe, and as only one ship was involved in this dispute he decided to stand his ground. At Portsmouth the new commander-in-chief, Admiral John Montagu, who had replaced the disillusioned Pye in early April after Hood had rejected the command, gave orders that the Raisonnable should be fired upon if she tried to enter port. Fortunately Captain Hervey quelled the disturbance a day later and twelve men were placed in irons. When the ship finally reached the Thames a court martial was convened under the presidency of Captain Sir Hyde Parker at Chatham on 10 July, whereupon five of the men were sentenced to hang and three to receive three hundred lashes. Hervey pleaded for mercy to be shown and in several instances provided references to the court, and eventually just two men received their death sentence whilst the rest were pardoned.

Many thanks to Zoe Thomas for providing additional information to this article, and whose ancestor, Benjamin Gravatt, was one of the mutineers sentenced to death but reprieved aboard the Raisonnable.