In 1758 Knight entered aboard the Tartar 28, his father’s command, remaining with him until 1762 and serving in Commodore Lord Howe’s actions against St. Malo and Cherbourg. Following the peace of 1763 he joined the Romney 50, Captain James Ferguson, which was the flagship of the commander-in-chief in North America, Rear-Admiral Lord Alexander Colville. 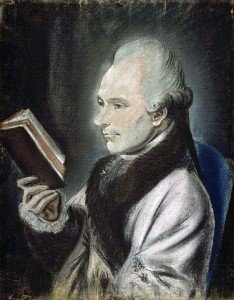 He was promoted lieutenant on 25 May 1770 and placed in command of the survey vessel Diligent, assisting the esteemed Swiss-born cartographer, Joseph des Barres, in his mapping of the North American coast for the next five summers whilst spending the winters with his young family in Nova Scotia.

On 15 July 1775 he became a prisoner of the Americans after being lured ashore in Machias harbour, Massachusetts, being unaware that the inhabitants had recently been involved in a skirmish with another British vessel. The Diligent was boarded and taken into rebel control the next day. Knight was held on parole in Northampton and South Hadley, Massachusetts, during which time he wrote to George Washington himself, requesting his release on the basis that he had been engaged in a peaceful duty for the benefit of all, and that he had never undertaken any hostile action against the rebellious Americans. He was eventually exchanged in December after a protracted captivity.

In February, having been acquitted by court-martial for the loss of the Diligent, he was appointed to the command of the hired ship Haerlem 12, which was manned by a crew of fifty and employed off the Delaware River cruising successfully against the colonial trade and in the conveyance of prisoners. In June he was ordered to take two American prize vessels and a number of prisoners to New York by Captain Andrew Snape Hamond of the Roebuck 44, whilst also conveying that officer s despatch pertaining to the feasibility of attacking Philadelphia from the river. During the voyage he cut out three vessels from Egg Harbour with the assistance of the Roebuck s tender Stanley, Lieutenant Richard Whitworth, and the armed sloop Hotham, Lieutenant Christopher Hele.

Knight commanded the Haerlem in the Philadelphia campaign of August-November 1777. Despite being fired upon by a 50-gun ship he made a remarkable escape from the Comte d Estaing s fleet in July 1778 by leading the pursuing ships towards to a shoal. After providing intelligence of the French whereabouts to Vice-Admiral Lord Howe he was taken aboard the flagship Eagle 64, Captain Henry Duncan, the commander-in-chief being keen to utilise Knight s unparalleled knowledge of the North American coast. He returned to England with Howe and the Eagle in October 1778..

For a short while he served aboard the Lizard 28, Captain Edmund Dod, which frigate patrolled the North Sea in search of the American privateer captain John Paul Jones, before in 1780 he was appointed to the Barfleur 90, Captain John Inglefield, the flagship of Rear-Admiral Sir Samuel Hood in the Leeward Islands. Knight soon rose to the position of first lieutenant and he commanded the vessel as flag-captain to Hood at the Battle of Fort Royal on 29 April 1781 whilst Inglefield was detained at St. Eustatius, and fought at the Battle of Chesapeake Bay on 5 September. On 21 September 1781 he was posted into the Shrewsbury 74 in succession to Captain Mark Robinson who had lost a leg in the latter battle.

In January 1782, after commanding the Shrewsbury at the Battle of St. Kitts on 25-26 January, he became flag captain to Hood aboard the Barfleur 98, serving in this post at the Battle of the Saintes on 12 April 1782, where the fire of his ship brought about the eventual surrender of the French flagship Ville de Paris 110. The Barfleur sailed for North America with Admiral Hugh Pigot s fleet in July before returning to the West Indies in the autumn, and then she came home to England from Jamaica at the peace to pay off in April 1783. During this latter period Knight devoted much of his time to the nautical education of Prince William, who had joined his vessel.

During 1786 he was the flag-captain once more to Hood aboard the Triumph 74 at Portsmouth, and from October 1787-8 he was again flag-captain to Hood at Portsmouth aboard the Barfleur 98. He commanded the Victory 100 from August 1790 during the Spanish Armament, and then through to August 1791 he flew Hood s flag on the same first-rate during the Russian Armament, his patron being the commander-in-chief of a fleet of thirty-six sail of the line that was preparing to confront the Russians in their war with Turkey. In 1792, when commanding the Duke 90 as flag-captain to Hood, he sat on the court-martial of the Bounty mutineers who had overthrown Captain William Bligh on 28 May 1789.

In December 1792 Knight recommissioned the Victory 100 once more, going out to the Mediterranean in May where he again became Hood’s flag-captain. From August 1793 he served at the occupation of Toulon and in February 1794 he carried the commander-in-chief’s flag during the Corsican campaign The Victory returned to Spithead with Hood when that officer was ordered home in the autumn of 1794, and after the admiral was effectively dismissed Knight returned to the Mediterranean with the Victory in May 1795 to serve as Rear-Admiral Robert Man’s flag-captain. He was present at the Battle of the Hyères Islands on 13 July 1795, and he returned home overland when the new commander-in-chief, Admiral Sir John Jervis, took the Victory as his flagship. 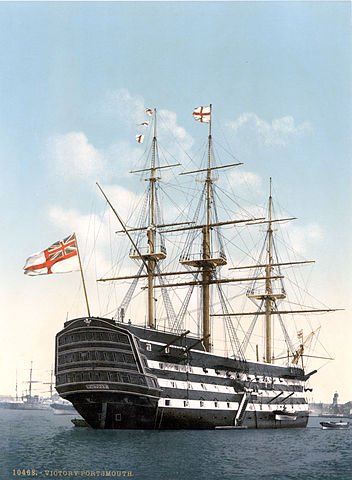 Captain Knight held the command of the Victory on several occasions

In April 1796 he recommissioned the Montagu 74 for Admiral Adam Duncan’s fleet in the North Sea, which ship was one of the first to mutiny in the North Sea squadron on 27 May 1797. The Montagu later sailed for the Nore with a half-dozen other rebellious vessels to join the more militant mutiny that had began on 12 May, and she was one of the last ships to rejoin the colours. During the latter episode her surgeon was tarred and feathered and rowed around the fleet before being dumped ashore. During the mutiny Knight was an emissary from the Admiralty to the disaffected men. There followed some reconciliation at the Battle of Camperdown on the 11 October, where the Montagu suffered casualties of three men killed and five wounded, Knight s ship assisting the Russell 74 in forcing the surrender of the Delft 68.

In 1798 he raised his broad pennant aboard the Montagu as the commodore of a detached squadron off Ireland, and in June went out to the Mediterranean. In 1799 the Montagu was with Vice-Admiral Lord Keith in his pursuit of Admiral Bruix s fleet following that officer s breakout from Brest on the 25 April 1799, and she also saw service off Cadiz. Thereafter Knight served at the blockade of Brest from August, commanding the inshore squadron as a commodore under the orders of Admiral the Earl of St. Vincent, with Captain Charles Paterson serving as his flag-captain, having earlier been appointed to the ship in January 1800 when Knight was ill. On 12 April the Montagu fought seven frigates in Bertheaume Bay but they were able to skulk under the batteries and avoid capture.

On 1 January 1801 he was promoted rear-admiral, and after four years unemployment he succeeded Rear-Admiral Sir Richard Bickerton in command at Gibraltar in the summer of 1805 with his flag aboard the Guerrier 74, Captain Robert Lloyd, having gone out with a valuable convoy with his flag in the Queen 98, Captain Francis Pender. However, he retired through ill-health in the following year.

He was married twice. His first wife, Margaret Ryoch, who lived in Nova Scotia whilst he was engaged in survey work, died in November 1798, and he was married for a second time on 1 October 1799 to Love Pickman Frye, the daughter of a senior Massachusetts judge, and the widow of Dr Peter Oliver. He had five daughters who survived infancy and three sons from his first wife but no children by his second. Two of his sons lost their lives whilst in the service, Samuel being the first lieutenant of the sloop Martin which foundered with all hands in 1805, whilst Hood, who had reached the rank of commander, died in 1823. Another son, George William Henry, was posted captain in 1814. One of his daughters married Rear-Admiral Alex Shippard.

Knight was skilled in surveying and astronomical observations, and was regarded as being a very able officer, but with a tendency to moaning and one who was unpopular with his peers. The commander-in-chief in the Mediterranean, Admiral Lord Collingwood, stated privately that having Knight at Gibraltar was worse than having nobody there. His London address from 1803-26 was 45 Grafton Street. Knight Island, off New Zealand, was named after him by Captain William Broughton, who had been a fellow prisoner in North America in 1775, having been captured whilst commanding a boat from the Falcon.