Sutherland was commissioned lieutenant on 28 December 1770 and promoted commander of the Vulture 14 in May 1779, participating in Commodore Sir George Collier s expedition up the Hudson River to drive the Americans out of Stony Point later that month. . 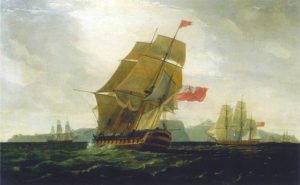 He was posted captain on 5 December 1780, and commanding the Russell 74 in the Leeward Islands he fought in the Battle of Fort Royal on 29 April 1781. He had the sloop Saint Eustatius later in the year on the same station, and at the end of January 1782 was ordered to exchange with the newly posted Captain Lord Cranstoun into the Belliqueux 64, in which he fought at the Battle of the Saintes on 12 April. After sailing to North America with the fleet under Admiral Hugh Pigot the Belleiqueux returned to the Leeward Islands in the autumn, and thereafter served at Jamaica before coming home to be paid off in August 1783.

Sutherland recommissioned the Powerful 74 in May 1786, serving some time as the flag captain of Rear-Admiral Thomas Graves, the commander-in-chief at Plymouth, and retaining her until 1788. He then had the guardship Orion 74 from July 1788 until April 1789, also serving on the Plymouth station, and in July 1790 he commissioned the new Nassau 64 for the Spanish Armament, paying her off later that year.

He recommissioned the Diadem 64 in February 1793, serving at the occupation of Toulon from August, and later joined the Berwick 74 at the beginning of July 1794, leaving her on 10 October, and on both occasions being succeeded by Captain William Smith.

Sutherland became the commissioner at Gibraltar in November 1794, retaining the position until his death in the following year.

He married Louisa, daughter of Sir George Colebrooke, and left issue an infant daughter, Louisa, and a son, James Charles. His address was given as Walcot, Somerset and his will was dated December 1795.