1743- 1793. He was born on 30 October 1743, the sixth born son of Edward Farnham of Querndon, Leicestershire, and of his wife Esther. Four of his brothers predeceased him whilst one of his sisters became the Countess of Denbigh.

Farnham was commissioned lieutenant on 3 October 1771, and he served as a junior lieutenant aboard Vice-Admiral Lord Howe s flagship Eagle 64, Captain Henry Duncan, in North American waters during 1776-7. Having commissioned the purchased brig Diligent in August 1777 he commanded her thereafter in North American waters, being engaged against the rebels in the Hudson River and later off New York in the following spring. 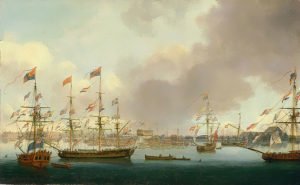 HMS Alexander is launched in 1778. Captain Farnham commanded her in Admiral Kempenfelt’s brilliant action of December 1781.

He was promoted commander on 3 April 1779, and with the sloop Nautilus 16 joined Commodore Sir George Collier s campaign of May-August where he earned his senior officer s praise for his destruction of enemy vessels during the Penobscot expedition. The Nautilus was paid off at New York in June 1780 and he went on half-pay.

In July 1781, following representations by his friend Joseph Craddock to Lord Sandwich at the Admiralty, Farnham was appointed to the Kite 10 which he fitted out at Portsmouth. He later commanded the Alexander 74 in an acting capacity for Captain Lord Longford in Rear-Admiral Kempenfelt s brilliant action with the Comte de Guichen on 12 December, but after being posted captain on 27 March 1782 he could not obtain a ship and was placed on half-pay.

In March 1783 Farnham recommissioned the frigate Winchelsea 32 which went out to Newfoundland in May as the flagship of Vice-Admiral John Campbell, and after wintering in England she set sail for that colony again in May 1784 and April 1785. The Winchelsea was paid off in December 1785. Meanwhile in June 1783 Farnham had succeeded his elder brother in the ownership of the family estate at Querndon in Leicestershire.

In May 1790, during the Spanish Armament, he recommissioned the Niger 32, retaining her until the following January and serving on the Newfoundland station.

Farnham died on 24 November 1793 having never married, and he was buried at Querndon.