1731-1800. The second son of John Locker, a barrister and writer, and of his wife, Elizabeth Stillingfleet, he was born at a residence attached to the Leatherseller s Hall in February 1731.

Locker was educated at Merchant Taylor s School, London before entering the navy in June 1746 as a captain s servant to his relative Captain Charles Windham aboard the newly launched Kent 64. In 1747 he went out to the West Indies aboard the sloop Vainquer, Captain James Kirk, transferring with this officer to the Vulture 10. He subsequently spent some time aboard the Cornwall 80, Captain Richard Chadwick, the flagship of the commander-in-chief on the Jamaican station, Rear-Admiral Charles Knowles, and he was present at the bombardment and capture of the fort at Saint-Louis-du-Sud, Saint-Domingue, on 8 March 1748. He then rejoined Captain Kirk aboard the Elizabeth 70, in which he returned to England on the termination of the War of Austrian Succession. 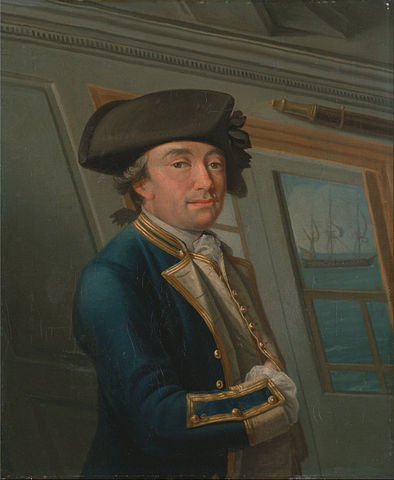 Facing little prospect of employment in the navy during the years of peace, Locker instead joined the East India Company and voyaged to the sub-continent and China. In 1755 he re-entered the navy as a master s mate aboard Vice-Admiral Sir Edward Hawke s flagship St. George 90, Captain John Storr, and he was commissioned lieutenant on 4 July 1756. After going out with Hawke that summer to the Mediterranean aboard the Antelope 50, Captain Thomas Saumarez, he immediately joined the Experiment 20, Captains John Bladen Tinker and John Strachan, and he later served under John Jervis, the future Lord St. Vincent, when that officer held the temporary command of this vessel for two months in 1757.

On 19 July 1757 off Alicante the Experiment under Captain Strachan s command fought the T l maque 20, a French privateer manned by four hundred and sixty men. Wisely Strachan refrained from moving in to close quarters until he had battered his opponent with a relentless cannonade, and in leading the subsequent boarding party Locker was wounded in the leg. As a result of the action the privateer sustained the enormous casualties of one hundred and ten men killed and one hundred and fifty-six wounded in return for forty-one casualties aboard the Experiment.

In December 1758 Locker transferred with Strachan to the Sapphire 32, which served in the Channel during the following summer, and was present at the Battle of Quiberon Bay on 20 November 1759. Early in 1760 Locker was appointed to the Ramillies 90, Captain Wittewronge Taylor, but having travelled to Plymouth he was unable to join her as his commission had not arrived. Shortly afterwards, on 15 February, the Ramillies was wrecked in a violent storm on Bolt Tail near Hope Cove in South Devon with the loss of over seven hundred lives. Just twenty-five men survived. In March the fortunate Locker rejoined Admiral Sir Edward Hawke aboard his flagship Royal George100, Captain William Bennett, being employed at the blockade of the French fleet in Brest.

On 7 April 1762 Locker was promoted commander of the fireship Roman Emperor 16, serving in the Basque Roads later that year, and which vessel was paid off in February 1763 at Deptford following the end of the Seven Years War.

This time Locker was able to remain employed during the peace, being appointed to the sloop Nautilus 16 in which he soon embarked the garrison from Gor e under the terms of the peace agreement with France. After paying the Nautilus off in October 1763 he then recommissioned her and went out to the Jamaica in February 1764 to be employed off Central America and in the Gulf of Mexico. During the early part of 1765 the Nautilus sailed some one hundred miles up the Mississippi River above New Orleans to deliver artillery, stores and materials for the erection of Fort Bute, in what is today the East Baton Rouge Parish. In the following year she was at Honduras where the Spanish authorities placed in Locker s custody forty-seven Negro slaves who had fled their bondage. His sloop was eventually paid off at Deptford in 1768, and on 26 May he was posted captain, one of only a handful of officers to achieve that rank during the year.

Having delivered the newly launched Queen 90 from the Thames to Plymouth, Locker was appointed to the frigate Thames 32 during the Falkland Islands dispute in October 1770, and he carried the governor Lieutenant-General Edward Cornwallis and his suite out to Gibraltar in January 1771. Thereafter serving predominantly in home waters he conveyed the lieutenant-governor, Lieutenant-Colonel Sir Robert Boyd, out to Gibraltar in May 1773 before leaving the Thames later that year.

Locker had a huge influence on the career of the young Horatio Nelson.

As the American War of Revolution developed Locker was appointed in March 1777 to the frigate Lowestoft 32, which he commissioned at Sheerness for Jamaica, and on which he engaged Horatio Nelson as a junior lieutenant. Leaving England with the West Indies convoy in the company of the Grasshopper 14, Captain William Truscott, the Lowestoft reached Jamaica on 19 July. She was then ordered to cruise off Cuba, and although Locker was absent during this period due to a re-occurrence of malaria he was sufficiently recovered to sail on another cruise in November. His skilful stewardship of the Lowestoft led to her being regarded as one of the navy s crack frigates, but he resigned the command in the spring of 1779 and returned to England as a consequence of his continuing ill-health.

During the Dutch Armament of 1787 Locker served as the regulating captain of the Impress service at Exeter, and at the time of the Spanish Armament in 1790 he was employed as the flag-captain to Vice-Admiral Thomas Graves aboard the Cambridge 80 at Plymouth, which vessel he had recommissioned in June that year. After a short period as the commander-in-chief at the Nore from 1792 with his broad pennant aboard the Sandwich 90 he became the lieutenant governor of Greenwich Hospital on 15 February 1793 following the death of Captain James Ferguson.

Captain Locker died in Greenwich Hospital on Boxing Day 1800 after a slow decline and a paralytic complaint, and he was buried in the family vault at Addington in Kent.

In October 1770 at Addington he married Lucy, the daughter and heiress of Admiral William Parry, but she died in March 1780 at St. Vincent s Lodge near Wrotham after bearing him two daughters and three sons. One son, Sir Edward Hawke Locker, entered the Pay Office in 1795 and from 1804-14 was the civil secretary to Admiral Sir Edward Pellew.

Locker, whose surname was often spelt Lockyer , was of a cheerful disposition, brave, and without any pretensions, and was regarded as professional and most proficient in his trade. In appearance he was weather-beaten, well built, had humorous eyes, was balding, and carried the merest limp from his engagement with the T l maque in 1758. He had an extremely strong influence on the young Nelson, who cherished his friendship ever after, and he in turn was highly regarded by Admiral Lord Hawke. He was a good friend of Admiral Sir Robert Kingsmill and of Admiral Sir Hugh Palliser. A well-educated man, with the assistance of Admiral of the Fleet Sir John Forbes he prepared material for a naval history which was then completed by John Charnock under the title Biographia Navalis . He was a keen patron of the arts, advocating in 1795 that the Painted Hall at Greenwich be dedicated to naval art.