1759-1821. He was born on 14 August 1759, the second of four sons and three daughters of the Scottish politician, Pryse Campbell M.P. of Cawdor Castle, Nairnshire, and of his wife Sarah, the daughter of Sir Edmund Bacon, Bt. His elder brother, John Campbell, sat as an M.P. in the interests of Lord North and later William Pitt the Younger, and in 1796 was created the Earl of Cawdor.

Little is known of Campbell s early service other than he joined the Navy in 1771 and was commissioned lieutenant on 6 June 1778. He was elevated to the rank of commander on 27 August 1780, and joining the fireship Lightning 14 he was attached to Vice-Admiral George Darby s Channel Fleet in August 1781.

He was posted captain of the sluggish frigate Aurora 28 in November 1781, escorting the trade in the home islands, and in July 1782 it was reported that his command had captured a French privateer, the Madame 44, after a severe action in which the Aurora lost seven men killed and nine wounded, whilst her opponent suffered significantly more casualties. The prize was apparently carried into St. Ives. 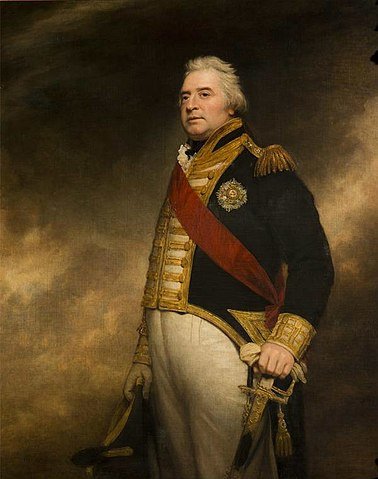 From March 1783 Campbell commanded the frigate Orpheus 32, going out to the Mediterranean where amongst other duties she returned the crew of an Algerine cruiser to the Dey of Algiers after their vessel had been destroyed by the Portuguese off Gibraltar in October 1786. The Orpheus returned home to be paid off in February 1787. In May 1790 he commissioned the Nymphe 32 at Portsmouth, being attached to the grand fleet during the Spanish Armament, and retaining her into the following year.

At the commencement of the French Revolutionary War in 1793 Campbell recommissioned the eighteen-pounder frigate Leda 36, in which he joined Rear-Admiral John Gell s squadron that escorted the East India trade out of St. Helens in April. On 9 June he captured the Eclair 22, the first French man-of-war to be taken in the Mediterranean since the commencement of hostilities, and from August he served at the occupation of Toulon.

In April 1794 he briefly commanded the Berwick 74 in the stead of her late captain, Sir John Collins, but in May he removed to the Terrible 74, initially flying the flag of her previous commander, the recently promoted Rear-Admiral Skeffington Lutwidge. He saw action at the reduction of Corsica and participated in Admiral William Hotham s unsatisfactory engagements with the French at the Battle of Genoa on 13-14 March 1795, suffering casualties of six men wounded, and at the Battle of Hyeres on13 July.

On 22 September 1795 a mutiny was averted aboard the Terrible, and after a court martial the five ringleaders were hung on 3 October. She was then placed under the orders of Rear-Admiral Robert Man, and thus was one of those ships that were so unfortunate as to return to England on 30 December 1796 and to miss the Battle of Cape St. Vincent on 14 February 1797. During the mutiny at Spithead which erupted on 16 April Campbell and all of his officers bar the master and a midshipman were put ashore, and he was one of a number of captains who had been superseded once the fleet returned to duty.

In April 1798 he was appointed to the newly commissioned Dragon 74, which eventually arrived at Portsmouth in November having been fitted out at Woolwich. Seeing service in the Channel fleet, on 26 April 1799 the Dragon was the lookout ship off Brest and sent news of the breakout of the French fleet. She sailed with Rear-Admiral Sir Charles Cotton s reinforcements to the Mediterranean during the subsequent campaign before returning to the Channel. In November 1799 she was ordered to victual for the Mediterranean station, but in the spring of 1800 was still attached to the Channel fleet.

Campbell was advanced to the rank of rear-admiral on 1 January 1801, and at the end of August arrived at Plymouth to join the Channel Fleet in which he raised his flag aboard the T m raire 98, Captain Thomas Eyles. In early December, having been ordered to take reinforcements of eight sail of the line out to the West Indies as subordinate to Rear-Admiral Sir John Duckworth, he faced down a mutiny in Bantry Bay when it was reported that he went among the men, supported by his officers, to seize the ringleaders The squadron returned to Portsmouth, and at a court-martial presided over by Admiral Sir Andrew Mitchell a number of men and marines were either sentenced to death or severe floggings. Thereafter Campbell s ships remained wind-bound for several weeks until he sailed for the West Indies in early February with six sail of the line and a frigate, reaching Martinique before heading on for Jamaica. With the peace having been agreed with France the squadron returned to Plymouth from Jamaica on 20 September to be paid off after a difficult eleven-week passage that saw all reduced to short rations.

On the resumption of hostilities in the spring of 1803 Campbell was initially responsible for the pressing of seamen in the south-west before he raised his flag aboard the Culloden 74, Captain Robert Otway. Although attached to the Channel Fleet he was sent by the commander-in-chief, Admiral Hon. William Cornwallis, with a squadron of four sail of the line to the Straits of Gibraltar, but unfortunately five homebound French sail of the line from San Domingo eluded him and put into Corunna. 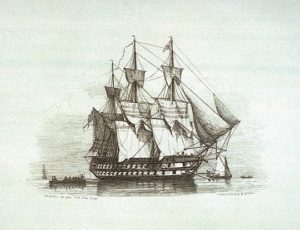 Remaining off Spain, Campbell transferred his flag to the Canopus 80, Captain John Conn, and in the middle of August joined Vice-Admiral Lord Nelson s Mediterranean Fleet. On 24 May 1804, whilst in company with the Donegal 74 and Amazon 38, and with the remainder of the fleet over the horizon, he went in chase of a French sail of the line and a frigate off Cape Cepet, but in turn was pursued by a number of gun-boats. Soon afterwards four French sail of the line and two frigates came out from Toulon to investigate, and after a brief engagement Campbell decided to retire in the face of the superior odds. Apparently exhausted and suffering from a nervous breakdown, he returned home aboard the Ambuscade 32, Captain William Durban, in January 1805.

On 13 December1806 he was one of a few officers promoted vice-admiral in order that their junior, Rear-Admiral Sir James Saumarez, could accede to that rank, but he otherwise remained unemployed until March 1808 when he raised his flag aboard the Prince of Orange 74, Captain Francis Beauman, in the Downs as commander-in-chief. He was one of a number of senior admirals who sat on Admiral Lord Gambier s court-martial at Portsmouth following the Battle of the Basque Roads of 11 April 1809. Returning to the Downs, he subsequently flew his flag aboard the Monmouth 64, Captain Francis Beauman, from 7 October 1810 to the following year, and thereafter the Agincourt 64, Captain William Kent, and he continued in command of that station until the spring of 1811 when he was succeeded by Rear-Admiral Thomas Foley.

Campbell became a full admiral on 4 June 1814, and on 2 January 1815 was created a K.C.B. He was appointed a groom of the bedchamber to his good friend, the Prince Regent, in 1817 and on 15 May 1818 was awarded the position of commander-in-chief at Portsmouth with his flag briefly aboard the guardship Ramillies 74, Captain Aiskew Paffard Hollis, and thereafter the Queen Charlotte 100, Captain Thomas Briggs. He was nominated a G.C.B on 8 June 1820.

Sadly, on 23 January 1821, and just a few weeks before he was due to vacate the position of commander-in-chief at Portsmouth, Campbell committed suicide, his body being found by his valet alongside a pistol. The coroner returned a verdict of lunacy, although he had recently been afflicted by a condition that had caused blood to rush to his head. A public funeral was held on 30 January at Portsmouth, attended by a host of senior admirals and other naval officers, and he was interred with full military honours in the Royal Garrison Chapel.

His nephew, Hon. George Pryse Campbell, entered the service in 1803 aboard the Culloden, serving thereafter with Campbell on the Canopus and Ambuscade before enjoying a successful career which was crowned with his promotion to captain the day before the death of his uncle in 1821.

Campbell was the M.P for Carmarthen from 1806-1813 in his brother s interest, supporting the Whigs but never making a speech. Despite pressure from his brother, who exercised some control of Campbell but was no doubt responsible for his many senior appointments, he eventually resigned from parliament on the grounds of ill health.

He married his first cousin, Eustacia Campbell-Hooke, on 1 February 1805 but had no issue. His address was at Foxhall, Ealing, and in his will was given as Milbrook House, Hampshire.

Campbell was described as humane and charitable, a kind, quiet gentlemen , being seen as fair, pleasant and gallant, and most popular, but somewhat prone to weariness and ill health. He was on particularly friendly terms with the future King George IV.