In 1760 Holloway entered the service aboard the Antelope 50, Captain James Webb, going out to Newfoundland in the following year with Captain Thomas Graves, who had been appointed governor, and who assumed command on Webb’s death in May 1761. He remained on that station once Graves was succeeded as governor by Captain Hugh Palliser in April 1764, and was aboard the Launceston 44, Captain John Gell, with the flag of Vice-Admiral Philip Durell when that officer went out to North America in 1766 as the commander-in-chief. Durell sadly died within a few days of arriving on his station, and Holloway later served under his successor, Commodore Samuel Hood aboard the Romney 50, Captain John Corner.

On 19 January 1771 he was promoted lieutenant, and he rejoined Hood aboard the Portsmouth-based guardship Marlborough 74 in November 1773, this ship serving as the flagship to Vice-Admiral Sir James Douglas.

In 1776 Holloway was appointed to the Perseus 20, Captain Hon. George Keith Elphinstone, which went out to North America in July. He afterwards removed into the Preston 50, Commodore William Hotham, with whom he struck up a friendship that would guarantee him employment for many years, and on which vessel he fought at the defence of Sandy Hook in July 1778 and the action off Rhode Island in August. After sailing to the Leeward Islands in the autumn, the Preston was present in Rear-Admiral Hon. Samuel Barrington’s brilliant defence of St. Lucia against the Comte d’Estaing on 15 December. 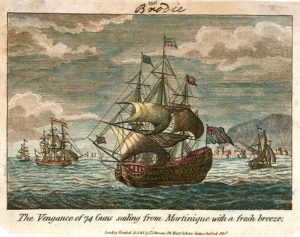 An engraving of Holloway’s first command, the Vengeance 74.

A very short employment in Rear-Admiral Hyde Parker s flagship Princess Royal 90 saw him promoted commander, and on 17 January 1780 he was posted captain of the Vengeance 74 carrying Hotham’s broad pennant. In this capacity he was present at the Battle of Martinique on 17 April, where his ship lost one man killed and six wounded, and in the subsequent Leeward Islands campaign from May July including the fleet skirmishes in the former month when she lost three men killed and sixteen wounded. His vessel survived the hurricane that swept over the West Indies from 4 -12 October, and in the following spring he set sail with Hotham for England with much of the treasure plundered in Admiral Sir George Rodney s raid on St. Eustatius on 3 February 1781. Unfortunately their convoy was discovered by the French off the Scilly Islands on 2 May and most of the merchant ships were lost

After a period ashore Holloway joined Admiral Lord Howe off the Texel in 1782 aboard the three-decker Cambridge 84, and was employed in the Channel fleet cruises between April and August 1782. Upon transferring into the poorly-regarded forty year-old Buffalo 50, he was with the Channel fleet at the relief of Gibraltar on 18 October. When all bar four of the merchantmen failed to get into Gibraltar at the first attempt through the vagaries of the weather, Holloway was charged by Lord Howe with the vital task of collecting the remainder, and in doing so was forced to take them close into the Barbary shore to avoid two enemy sail of the line. He rejoined the fleet six days later with Lord Howe sending a personal message of congratulation via his captain of the fleet, John Leveson-Gower. In the action off Cape Spartel the Buffalo was in the rear of the fleet, and to prevent herself being captured she had to endure a close action with the Spanish, suffering casualties of six men killed and sixteen wounded.

After returning to England Holloway commanded the Vigilant 64 for a short time prior to the peace of 1783, whereupon he remained on half-pay until July 1786 when he commissioned the new frigate Solebay 32, sailing for the Leeward Islands in October. He returned to England in 1789, and in 1790 resumed his role as flag captain to Rear-Admiral William Hotham, this time aboard the Princess Royal 98 during the Spanish Armament. This vessel was paid off at the end of the Russian armament in September 1791. 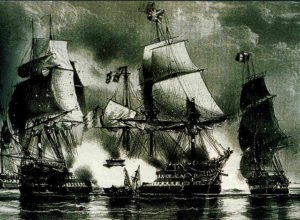 In January 1793 he one more became flag-captain to Hotham with his appointment to the Britannia 100, going out to the Mediterranean in May and being present at the occupation of Toulon from 27 August. He fought at the Battle of Genoa with the French on 13 -14 March 1795, when his command lost one man killed and eighteen wounded, and he became Hotham’s captain of the fleet at the end of June upon the admiral’s ascendance to the chief command following Lord Hood’s recall. On 13 July he fought in Hotham’s second engagement with the French, the Battle of the Hyères Islands, and he returned with the admiral to England following his replacement by Vice-Admiral Sir John Jervis towards the end of the year.

Holloway was next appointed to the Duke 98 in the late summer of 1796, flying the flag of Rear-Admiral Christopher Parker at Portsmouth in early 1797, and being asked to leave the ship during the Spithead mutiny which broke out on 16 April. Although he was re-instated, he chose not to rejoin the Duke, and after a month with the new Ajax 74 from June 1798 he removed to the St. George 98, serving in the Channel.

On 14 February 1799 he was promoted rear-admiral, and from May 1800 until the peace of 1802 was second-in-command at Portsmouth with his flag in various ships to include the Jason 36, Captain Joseph Yorke, Braakel 54, Captain George Clarke, the Brunswick 74, Captain George Hopewell Stephens, and from December 1801 until April 1802 the Gladiator 44, Lieutenant John Bell Connolly. In this role he was president of the court martial that convened on 1 September 1801 to enquire into the loss of the Hannibal 74, Captain Solomon Ferris, at the Battle of Algeciras from 5 to 12 July.

Holloway reassumed this position at Portsmouth on the renewal of hostilities in 1803 with his flag flying aboard the Gladiator 44, Lieutenant Thomas Harrison, and following his promotion to vice-admiral on 23 April 1804 he became second-in-command to Admiral Lord Keith at the Nore with his flag aboard the Utrecht 64, Captains Thomas Seccombe and John Wentworth Loring. From 1804-7 he was commander-in-chief in the Downs, flying his flag towards the end of that period aboard the Princess of Orange 74, Captain Joshua Sydney Horton.

From 1807-9 Holloway was the governor and commander-in-chief in Newfoundland with his flag on the Isis 50, Captain John Laugharne, then from 1809 the Antelope 50, Captain Donald M’Leod. During his tenure he did much to prevent the mistreatment of the native population.

On 25 October 1809 Holloway was promoted admiral, and after many years of good health he died suddenly at Wells on 26 June 1826.

He married Elizabeth Walrond of Antigua in 1780 and had a son, William Henry Hotham Holloway, who died aged thirteen at sea aboard the Narcissus 32, Captain Rodd Donnelly, in August 1802, and three daughters, the eldest, Clementina, being married to Admiral Sir Robert Waller Otway.

In addition to his great friend Lord Hotham, Holloway enjoyed the patronage of, amongst others, the future Admiral Lord Graves, Admiral Sir Hugh Palliser and Admiral Lord Hood. He was mild-mannered and of a pleasant manner, being regarded as steady, firm, balanced, honest, blunt and reliable.