1742-1821. He was born in Ireland, the elder son of a Dublin attorney by the name of John Colpoys, and of his wife, a Miss Madden. He was the uncle of Vice-Admiral Sir Edward Griffith Colpoys.

Colpoys entered the navy in 1756, serving at the reductions of Louisbourg in 1758 and Martinique in 1762. He was commissioned lieutenant on 22 October 1762 and saw further service in the Leeward Islands during the peace.

In early 1771 he was scheduled to go out to the East Indies as third lieutenant of the Northumberland 70, Captain John Symons, carrying the flag of Rear-Admiral Sir Robert Harland, but was detained by investigations into the death of a man during an affray involving his press gang. He eventually sailed for the East Indies aboard an Indiaman and was employed as the acting-commander of the Dolphin 24 from April to August 1772. On 25 August 1773 he was posted captain of the Northumberland, having previously been promoted commander of the sloop Lynx, apparently for purposes of rank only. He sailed for home in 1774 with Harland’s flagship, was at the Cape in November, and paid her off in the following summer at Spithead. 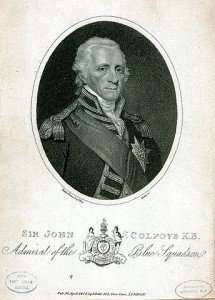 In late 1775 Colpoys was appointed to the recommissioned frigate Seaford 20, going out to the Leeward Islands in March, and also serving off North America. From 1777-8 he commanded her in the Leeward Islands once more, and then at Jamaica, capturing the French sloop Snake 16 in that period in addition to the American privateers General Washington on 18 January 1778 and Hampden 12 on 1 March.

Upon returning to England, he became flag captain to Vice-Admiral Sir Robert Harland in the Channel fleet from December 1778 aboard the Royal George 100, and he sat on Vice-Admiral Sir Hugh Palliser’s court martial four months later to investigate that officer’s conduct at the Battle of Ushant on 27 July 1778. Continuing with the Royal George, he briefly flew the flag of Vice-Admiral George Darby in the early summer of 1779, and thereafter Rear-Admiral Sir John Lockhart Ross, being attached to Admiral Sir Charles Hardy’s Channel Fleet and taking part in the retreat from the Scilly Islands during August. He left this vessel in October 1779.

In June 1780 Colpoys was appointed to commission the newly launched frigate Orpheus 32, and he took her out to North American waters in August where he joined the Roebuck 44, Captain Andrew Snape Douglas, in the capture of the rebel privateer Confederacy 36 off the Delaware on 14 April 1781. Following the Battle of the Chesapeake on 5 September 1781 his command formed part of Rear-Admiral Thomas Graves’ fleet that returned to that river to attempt the rescue of the Army at Yorktown, only to find that it had already surrendered to the American / French alliance. After sailing home towards the end of the war he was commanding the Albion 74 when hostilities ended in 1783.

He was appointed to the frigate Phaeton 38 in April 1783 for three years of service in the Mediterranean, initially flying the flag of Commodore Sir John Lindsay, and when she was paid off in August 1785 he went on half-pay. From May1790 until 1793 he commanded the Plymouth-based guard-ship Hannibal 74, joining the grand fleet in the Spanish Armament of 1790, and remaining in commission through the Russian Armament of 1791 he sat on the court-martial into the Bounty mutineers in 1792. At the end of the latter year the Hannibal made a rendezvous with all the other guard-ships at Spithead in order to prepare for the expected war with France.

When hostilities with France commenced on 2 February 1793 Colpoys hoisted a broad pennant aboard the Hannibal as commander-in-chief at Guernsey with two other sail of the line and a frigate at his disposal in order to protect it against any possible invasion. During this period the Hannibal cruised in the Channel with the Hector 74, Captain George Montagu, and although they unsuccessfully chased two French frigates, they had better luck with the capture of a French West Indiaman. On 26 March 1793 the Hannibal sailed under Colpoys’ flag with Rear-Admiral Alan Gardner’s fleet to the Leeward Islands and took part in that unsuccessful campaign before returning to England in the same year. In January 1794 she was employed in the conveyance of a minor royal out to Gibraltar.

On 12 April 1794 Colpoys was promoted a rear-admiral, and with his flag aboard the London 98, Captain Edward Griffith, he served in the Channel fleet from October, going aboard the Culloden 74, Captain Thomas Troubridge, on 4 December in a fruitless attempt to talk her mutinous men back to duty. During the following March he assumed command of a squadron of five sail of the line and four frigates that were ordered to cruise to the westward, and they soon captured the French corvette Republicain 22. On 10 April his squadron gave chase to three French frigates in the Channel, one of which, the Gloire 36, was obliged to strike to the Astrea 32, Captain Lord Henry Paulet, and another, the Gentille 36, struck to the Hannibal 74, Captain John Markham, on the next day.

He became a vice-admiral on 1 June 1795 and continued with his flag aboard the London which was present at the Battle of Groix on 23 June under Captain Griffith. Around this time Colpoys briefly assumed the duties of port admiral at Portsmouth in the absence of Admiral Sir Peter Parker. On 29 October 1796 he replaced Vice-Admiral Charles Thompson in command of a squadron of thirteen sail of the line off Brest, it being the practice of the new commander-in-chief of the Channel fleet, Admiral Lord Bridport, to retain the main body of the fleet at Spithead.

In December Colpoys let Rear-Admiral Joseph de Richery enter Brest unmolested with seven sail of the line, but he made amends on 23 December when he forced a squadron from Toulon under the command of Rear-Admiral Pierre Villeneuve into Lorient. Unfortunately, he was away from his station when Captain Sir Edward Pellew sent news of the departure of the French invasion fleet of Ireland, and he subsequently did little to bring them to battle, claiming that a defeat at that stage of the war would have brought far-reaching consequences. In his defence he was further handicapped by his squadron separating in bad weather, and it was unfortunate that Bridport had not provided him with enough ships in the first place. Nevertheless, his reputation suffered as a result, and in particular with the seamen who sang a ditty at his expense which labelled him a ‘base coward’. 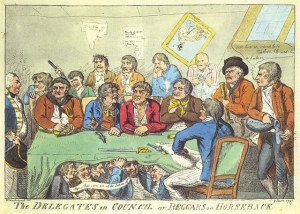 Colpoys was imprisoned on his own flagship by the Spithead mutineers and in general was despised by the common seamen, although he earned their respect for his personal bravery in physically protecting Lieutenant Peter Bover who was accused of murder during the insurrection.

During 1797 he was aboard the London when the Spithead Mutiny erupted on 16 April, and he was initially ordered to submit to the mutineers. When he did attempt to break the uprising on his flagship through force it resulted in the death of a seaman and the near lynching of the man’s assailant, the first lieutenant, Peter Bover. Colpoys was praised by many for having the resolve to attempt enforcement in the first place and was applauded both for being wise enough to back down in face of an escalation, and for courageously protecting his lieutenant in the face of the outraged mutineers who were demanding blood. Even so, he was imprisoned on his own ship to the horror of the Admiralty and then put ashore at the demand of his men following the peaceful resolution to the mutiny. Being advised by the Admiralty that it would be expedient for him to strike his flag, he did so in disgust on the 14th May, even though it was made clear that he had not been reprimanded.

In 1798 he was partially mollified by being created a K.C.B., but when he was ordered to raise his flag aboard the Bellona 74 to assumed command of a detached squadron the adverse reaction of the seamen forced the Admiralty to revoke his appointment. He was later appointed commander-in-chief of the East Indies station with his flag aboard the Northumberland 74, Captain George Martin, but again resigned this post without leaving home waters when the crew made it clear that they would be unhappy to serve under him.

On 1 January 1801 he was promoted admiral, and in June 1803 was appointed commander-in-chief at Plymouth with his flag aboard the Salvador del Mundo 112, Captain Charles Lane, and from December Captain John Dilkes. In May 1804 he became a lord of the admiralty, and he was briefly considered for the Mediterranean command in the event of Vice-Admiral Lord Nelson’s departure before being appointed the Admiralty treasurer in 1805. He later assumed the position of treasurer at Greenwich Hospital.

From 1816 he was governor of Greenwich Hospital, taking up the position on the death of Admiral Lord Hood and holding it until his own death on 4 April 1821, at which time he was the third most senior officer on the list.

Unmarried, he had lodgings in Cleveland Court, St. James in the last years of his life. His nephew, Edward Griffith, assumed the name Colpoys in memory of Sir John after his death.

Colpoys was regarded as the most rigid disciplinarian in the navy, and the common seamen certainly hated him, although contrarily his younger officers were very happy under his leadership, finding him kindly, happy, and great fun. Even so Captain Sir Edward Pellew was prominent amongst many senior officers who had little respect for him. It was said of him that he had never seen a shot fired in earnest.