1762-97. He was born Augustus Retnuh Reebkomp on 23 November 1762 in Rotterdam, the Netherlands, the illegitimate son of the politician and courtier Henry Herbert, 10th Earl of Pembroke, and of his mistress Kitty Hunter, with whom the earl had briefly eloped to the Continent. His middle name was that of his mother’s spelt backwards, and his surname an anagram of Pembroke. The 11th Earl of Pembroke, George Herbert, who served as a politician and soldier, was his half-brother. Despite his illegitimacy, Reebkomp was accepted into the Pembroke family at their estate of Wilton House, near Salisbury in Wiltshire.

After attending Eton School from 1767-71, Reebkomp joined the Navy, serving aboard the Orpheus 32, Captain John MacBride, as a captain’s servant from June 1773, and being rated midshipman of the Bienfaisant 64 on 1 April 1778, having presumably joined her with MacBride in November 1776. He would also assumedly have been present at the Battle of Ushant on 27 July 1778.

On 14 March 1779 Reebkomp was rated a midshipman aboard the Europe 50, Captain William Swiney, the flagship of Vice-Admiral Marriot Arbuthnot, in which he went out to North America that summer. During the autumn he removed to the Victor 14, Commander Henry Chads, which vessel had recently been commissioned at Boston after being captured from the Americans under whose flag she had, ironically, been known as the ‘Hunter’. 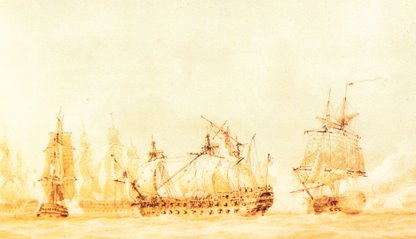 The Inconstant in action with the Ca Ira at the Battle of Genoa in 1795.

On 8 March 1780 he was commissioned lieutenant of the Hope 14, Commander William Thomas, but before he could join this vessel he was captured sixteen days later off Sandy Hook by an American privateer whilst voyaging north from Charleston. Imprisoned at Rhode Island, he was released within weeks and joined the Hope in June. On 3 November he transferred to the Intrepid 64, Captain Anthony James Pye Molloy, and as such would probably have been present at the Battle of Fort Royal on 29 April 1781. A week after that engagement in the Leeward Islands he joined Admiral Sir George Rodney’s flagship Sandwich 90.

On 28 July 1781 Reebkomp was promoted commander of the Ranger 8 by Admiral Rodney, and he left Barbados with Rear-Admiral Sir Samuel Hood’s despatches on 16 December to reach Spithead on 9 January 1782, reporting thereafter to the Admiralty.

Upon being posted captain of the Buffalo 60 on 24 May 1782 he changed his name to Augustus Montgomery, and although he retained the nominal command of the Buffalo until 17 June it is not clear that he ever commanded her at sea. In October it was announced that he was to join the frigate Boreas 28, which at the time was fitting out at Woolwich, and which he took out to Jamaica on New Year’s Eve. He subsequently commanded the recently captured French frigate Concorde 36 from 6 May 1783, in which he returned to England from Barbados to pay her off in September at Chatham.

Montgomery spent the next five years on half-pay, during which time it is said he visited the continent. In May 1788 he recommissioned the frigate Mercury 28 at Woolwich, going out to the Mediterranean in December, and being immediately sent to Cadiz to substantiate a report that the Spanish were fitting out several men-of-war. He returned to Portsmouth from Gibraltar in April 1791, and his command was paid off at the beginning of the following month.

In January 1793 he kissed the King’s hand on being appointed to the frigate Inconstant 36, which he joined at Woolwich prior to dropping down to the Downs in March. Having sailed from St. Helens with a squadron and several convoys under the orders of Vice-Admiral Phillips Cosby in April, he arrived at Lisbon on 11 May with the Portuguese convoy in company with the Flora 36, Captain Sir John Borlase Warren. The two frigates then briefly embarked on a cruise off the Iberian Peninsula before departing with the homeward-bound convoy. The Inconstant captured the French brig Curieux 16 on 3 June, together with her two prizes which she took into Portsmouth. It was reported that the Curieux had on board a governor and a general who had been recalled to France by the new Revolutionary government. The Inconstant was attached to the Channel Fleet in July, putting into Plymouth with Admiral Lord Howe’s despatches on the 27th before sailing to rejoin the fleet days later. After cruising from September until November, she then picked up a convoy at St. Helens to take out to the Mediterranean.

Remaining in the Mediterranean, Captain George Cockburn acted for Montgomery aboard the Inconstant from 20 January 1794 for a month before the latter returned to duty. In June he departed Naples with a convoy for Smyrna, being the senior officer of the attendant men-of-war, one of which, the Romney 50, Captain Hon. William Paget, captured the French frigate Sybille 36 off Mykonos on 17 June. He remained off Smyrna for the next few months before returning to Gibraltar with a convoy in the autumn. In February 1795 the home newspapers reported that the Inconstant had fought an engagement with two French frigates in the Mediterranean, capturing one and sinking another, and that Montgomery had lost his leg in the action. These reports were in fact without foundation, and in March the papers issued a retraction.

Removing as a temporary captain to the Courageux 74 in March 1795, he commanded her at the Battle of Genoa on 13-14 March, suffering casualties of fifteen men killed and thirty-three wounded, and being one of the ships that bore most of the action, with her main and mizzen masts going by the board. Ironically it was Montgomery’s old command, the Inconstant, Captain Thomas Fremantle, which towed the shattered Courageux into Leghorn. Following the battle Montgomery put a prize crew aboard the captured Ça Ira 80, and although they abandoned the French ship when it appeared she was doomed other elements of Vice-Admiral William Hotham’s fleet eventually saved her.

Montgomery was succeeded on the Courageux by Captain Benjamin Hallowell on 19 June 1795, and he briefly assumed the temporary command of the Audacious 74 before exchanging with Captain Davidge Gould in August into the Bedford 74, initially serving off Cadiz. He was subsequently detached with the Fortitude 74, Captain Thomas Taylor, and the prize Censeur 74 for England, but a French force under Rear-Admiral Joseph de Richery intercepted this convoy on 7 October with the result that the Censeur and the vast majority of thirty-one accompanying merchantmen were taken. The Bedford arrived at Portsmouth on 18 October and was paid off in November.

In May 1796 Montgomery succeeded Captain Herbert Browell aboard the Theseus 74, which was one of the Channel fleet’s most disaffected vessels. He served with Vice-Admiral John Colpoys’ squadron in search of the French invasion fleet of Ireland when it broke out of Brest in December, and having parted company with Colpoys in a storm he entered Plymouth in the company of the Defiance 74, Captain Theophilus Jones, on 1 January 1797.

Captain Montgomery died whilst still captain of the Theseus on 6 February 1797 in Cawsand Bay, Plymouth. He was buried in the graveyard of Stoke Damarel Church, Plymouth.

He married Susan Maltass in Smyrna, Turkey, in October 1791 and left a son who entered the clergy, and a daughter. A further son was born shortly after his death. His wife and the two children who were alive at the time of his death were provided for by the Pembroke family.

Montgomery was described by one correspondent from the Courageux as ‘a very good man’.