c1759-1813. He came from an established Cornish family. His brother James was wounded aboard the Monarch 74 at the Battle of Camperdown in 1797 when serving as her third lieutenant, and his injuries contributed to his early death at Padstow in December 1803.

Retalick was commissioned lieutenant on 6 September 1779, and in early 1794, whilst retaining this rank, he transferred out of Vice-Admiral Lord Hood’s flagship Victory 100 to command the hospital ship Dolphin 44, serving with the Mediterranean Fleet. In June he provided an escort to transports delivering troops to the Corsican Campaign when under the orders of Captain Horatio Nelson of the Agamemnon 64, and whilst continuing in the Dolphin with the Mediterranean fleet he was promoted commander on 12 August.

Retalick’s long service in command of the hospital ship was eventually rewarded when he was appointed to the Bonne Citoyenne 20 in the Mediterranean in May 1797, enjoying a profitable cruise in which he captured the privateers Pluvier 9 between Cartagena and Oran, and the Carnarde 10 from Marseilles in August, together with a number of merchantmen of small value. Joining Rear-Admiral Sir Horatio Nelson in the early stages of his search for the Egypt-bound Toulon fleet in 1798, he unfortunately parted company in a gale on 21 May when the admiral was in most need of his frigates and minor vessels to seek out the enemy. 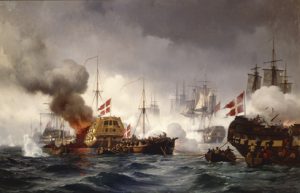 Captain Retalick commanded the Defiance at the Battle of Copenhagen in 1801.

Retalick left the Bonne Citoyenne in July 1798 upon the promotion of Nelson’s stepson, Josiah Nisbet, into her. He briefly commanded the armed vessel Earl of St. Vincent in co-operation with Britain’s Portuguese allies, with reports suggesting that he took command of the Portuguese flagship in order that the British signals could be understood, and he subsequently joined Captain Sam Hood off Alexandria after Nelson had sailed for Naples following the Battle of the Nile.

After being posted captain on 24 December 1798, Retalick appears to have continued his service in the Mediterranean in an unknown capacity until returning to Portsmouth as a passenger aboard the Loire 40, Captain James Newman Newman, on 3 August 1800. Before the end of that month he was appointed to the Isis 50, which on 19 September arrived in the Downs from the Yarmouth Roads. She remained inactive on the former station until 22 December when she set off to the westward but immediately put back again, and two days later Retalick was appointed to the Defiance 74.

On 7 January 1801 the Defiance arrived at Plymouth from the Channel Fleet off Ushant, and having rejoined that force she entered Portsmouth in early March to hoist the flag of Rear-Admiral Thomas Graves on the 5th. Six days later she sailed for Yarmouth in order to join the expedition to the Baltic. Fighting at the Battle of Copenhagen on 2 April where Graves was the second-in-command to Vice-Admiral Lord Nelson, the Defiance was in the thick of the action, sustaining heavy casualties of twenty-four men killed and fifty-one wounded.

The Defiance was recalled to the Channel fleet in July1801, but in early August was taken into harbour at Portsmouth. On 1 September Retalick sat on the court-martial aboard the Gladiator 44 at Portsmouth which investigated the loss of the Hannibal 74 at the Battle of Algeciras, and upon paying the Defiance off at the port on 28 October he was not thereafter re-employed.

Captain Retalick died on 28 August 1813 at Padstow, Cornwall after a short illness.

He married Phoebe Downwell at Portsea, Hampshire in June 1790. Following his death his widow was constrained to apply to a naval charity for financial relief. A beneficiary of his will was a girl born in 1796 at Portsea by the name of Elizabeth Dolphina, but it is not clear whether she was a relative or possibly an illegitimate child.