1752-94. He was born on 12 August 1752, the third son of Admiral John Montagu and his wife, Sophia Wroughton. He was the brother of Admiral Sir George Montagu, and of Lieutenant-Colonel Edward Montagu 1755-99, who was killed in the Army at Seringapatam.

On 18 August 1771 he was commissioned lieutenant, and on 11 September 1773 promoted commander of the sloop Tamar 16, removing in the early summer of the following year to the sloop Kingfisher 14 in succession to his brother George. All these appointments were made on the North American station where his father was the commander-in-chief.

Montagu was posted captain of the Mercury 20 on 14 November 1775 and a year later carried home despatches announcing the occupation of Rhode Island on 8 December 1776 by Commodore Sir Peter Parker s squadron. He then returned to North America sharing the escort of a convoy with the Somerset 64, Captain George Ourry, being sent up the North River in June, but whilst sailing down the Hudson’s River on 24 December 1777 his ship was wrecked after smashing into a hulk. At the subsequent court martial he was acquitted of any blame for her loss 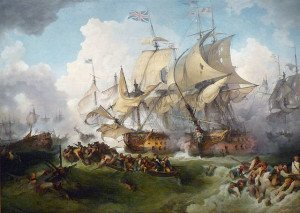 The Battle of the Glorious First of June where Captain Montagu lost his life.

In the following July he returned to England in command of the frigate Medea 28, which he continued to command in the North Sea and the Channel. Off Cape Finisterre on 20 October 1778, being in company with the Jupiter 50, Captain Francis Reynolds, he met the Triton 64, Captain Comte de Ligond s, but his ship was so badly damaged that he was forced to break off the action with the loss of one man killed and three wounded. He later captured the Dunkirk-based cutter privateer Duc de Lavaugnon 14 on 16 June 1779, receiving damaged rigging but no casualties in the process, and he served under the orders of Commodore John Jervis cruising off the Western Islands that December.

In October 1780 he commissioned the new Juno 32, cruising off Ireland and capturing the privateer Revanche 18 off Beachy Head on 10 February 1781 when in company with the Zebra 16, Commander John Bourchier. In February 1782 he went out to the East Indies under the orders of Commodore Sir Richard Bickerton and was present at the Battle of Cuddalore on 20 June 1783, before returning to England in March 1785 when the Juno was paid off.

In October of the following year he left for France where he travelled for a year, but after returning to England he was not employed again until February 1793. He was appointed to his namesake Montagu 74 at his special request, in which ship he participated in the Channel fleet cruises of July-August and October-December 1793, being present at the chase of Rear-Admiral Vanstabel s squadron on 18 November.

Captain Montagu was killed at the Battle of the Glorious First of June 1794, one of four men killed and thirteen wounded aboard his ship, with the command devolving on Lieutenant Ross Donnelly. There is a monument to his memory in Westminster Abbey.