1772-1848. He was born on 12 February 1772, the second son of General George Hotham, who acted as governor to the young Prince of Wales and Duke of York, and of his wife Diana Pennyman-Warton. He was the nephew of Admiral Lord Hotham and the cousin of Vice-Admiral Hon. Henry Hotham.

After an education at Westminster School and being entered onto the books of a number of vessels from 1779, including the yacht William and Mary, Hotham first went to sea aboard the Grampus 50, Captain Edward Thompson in the autumn of 1785, voyaging to West Africa. Following his return to England during the next spring he entered the Royal Naval Academy at Portsmouth, and four months later he joined the Solebay 32, Captain John Holloway, going out to the Leeward Islands in October. Coming home in September 1789 he joined the yacht Royal Charlotte, Captain Sir Hyde Parker, and four months later moved into the H b 38, Captain Alexander Hood, seeing further service in the Channel.

In June 1790, during the Spanish Armament, he was appointed to the Princess Royal 98, Captain John Holloway, the flagship of his uncle at Spithead, and on 27 October he was commissioned lieutenant. From January 1791 he was aboard the Alligator 28, Captain Isaac Coffin, which vessel sailed to Quebec in March to collect Lord and Lady Dorchester before returning to Spithead in October, whereupon he was paid off. In the following February he joined the Winchelsea 32, Captain Richard Fisher, going out to Halifax in March and escorting a troop force to the West Indies in the spring of 1793.

In May 1793, whilst still in the West Indies, Hotham joined the Duke 98, Captain George Duff, which vessel served as the flagship of Commodore Hon. George Murray in the operations against Martinique during Rear-Admiral Alan Gardner s March-June campaign. Returning to England in September he joined the frigate Inconstant 36, Captain August Montgomery, sailing a month later for the Mediterranean. In January 1794 he moved into Vice-Admiral Lord Hood s flagship, the Victory 100, Captain John Knight, and from 8 February fought with Captain Horatio Nelson at Bastia during the Corsican campaign.

On 12 August he was promoted from his position of first lieutenant of the flagship to the command of the sloop Eclair, but he was unable to take this vessel to sea as her men were required for service in the Mediterranean fleet s ships of the line. On 7 October 1794 he was posted to the Cyclops 28, and whilst waiting for the frigate to arrive at Leghorn in order that he could effect an exchange with Captain Davidge Gould he temporarily commanded the Bedford 74. This interim service saw him blockade two French frigates and a corvette in Smyrna in company with the Aigle 36, Captain Samuel Hood, prior to being chased away by Commodore Honor Ganteaume s squadron of one sail of the line and five frigates.

On 13 July 1795 Hotham commanded the Cyclops in Admiral Hotham s underwhelming action with the French fleet at the Battle of Hyeres. He returned to Weymouth on 19 January 1796 following an incredibly rapid six day voyage, and he set off for London with despatches whilst his frigate entered Portsmouth for a refit prior to being paid off on 8 March. A short period on the beach followed, one that was not helped by the knowledge that he had been appointed to the crack frigate Minerve 38 by Vice-Admiral Sir John Jervis in the Mediterranean, and that by returning to England he had lost the opportunity of commanding her. For the moment the only employment he could obtain was the acting-command of the Reunion 36 at Yarmouth during July.

In January 1797 he was given what was initially an acting appointment to the Adamant 50 based in the North Sea, and his was one of the first ships to display signs of disaffection when news of the mutiny at Spithead reached the fleet. The commander-in-chief, Admiral Adam Duncan, accordingly shifted his flag into the Adamant, and after this imposing officer famously dangled a mutineer over the side Hotham s ship remained loyal. When the general mutiny did eventually break out in the North Sea on 22 May the Adamant and the loyal flagship Venerable continued the blockade of the Dutch fleet in the Texel with Duncan maintaining an illusion of force by signalling to an imaginary fleet over the horizon. In September Captain William Mitchell briefly commanded the Adamant in an acting capacity, but after returning to duty Hotham fought at the Battle of Camperdown on 11 October, where his ship was fortunate not to sustain any casualties, and where he effected the capture of the Haarlem 64, although he had to leave her at anchor for several days off the Dutch coast until the weather moderated and she could be towed into Yarmouth. For his part in the action Hotham received a gold medal and his first lieutenant was promoted commander.

On 7 April 1798 the Adamant was off Caen in Normandy when a flotilla of French gunboats was thwarted in its attempt to recapture the British held island of St. Marcou, and she then drove the gunboats away on the following day. The French attacked again in May, on which occasion the Adamant was obliged by adverse weather to stand by as the island was staunchly defended by its garrison. In the following month she was employed under the orders of Commodore Sir Richard Strachan of Le Havre, and she returned to Spithead on 29 June. Here elements amongst her crew mutinied but Hotham managed to have the ringleaders seized, and following a trial they were convicted and executed.

Hotham next spent a short time ashore in ill health before rejoining the Adamant and being sent out to St. Helena to convoy home the trade. Upon arrival he found that his command was no longer required for this service, so he instead transferred to the Cape station at the end of 1798. Initially seeing duty under the orders of Commodore George Losack of the Jupiter 50, he later commanded at the blockade of Mauritius where on 12 December 1799, and with the assistance of the Tremendous 74, Captain John Osborn, he drove ashore the prolific commerce-raiding French frigate Preneuse 36. For a brief while in 1801 the Adamant flew the flag of Vice-Admiral Sir Roger Curtis, the commander-in-chief at the Cape, and in September she returned home with the East India Company s China fleet, arriving in the Downs at the beginning of December, following which she was paid off. 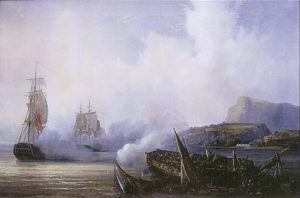 In March 1803, following the commencement of the Napoleonic War, it was reported that Hotham had been appointed to the Inflexible 64, yet he appears not to have taken her to sea, as from July he commanded the recommissioned Raisonnable 64 off the Texel and Boulogne, returning to the Downs towards the end of August. At the end of September the Raisonnable sailed from Portsmouth to the east where she assumed a station off Dungeness, however having dragged her anchors and almost been thrown ashore by a storm in December she sought sanctuary in the Downs. During March 1804 Hotham cruised off the Texel until in September he resigned his command and took passage home aboard the Ruby 64, Captain Charles Rowley, as a result of further ill health including an acute deafness.

He did not see any further active service, as after applying on the restoration of his health he was not offered any, but he did briefly command the Sea Fencibles at Liverpool from May 1808 until February 1810, and later the yacht Royal Sovereign from August 1812 through to April 1814, during which period he was promoted rear-admiral on 4 December 1813.

Following the peace Hotham travelled extensively in France and Switzerland, and he apparently became closely acquainted to the notoriously liberal socialite Madame Germaine de Sta l. He was appointed a gentleman-in-waiting to the Court, was nominated a K.C.B. on 2 January 1815, and became a vice-admiral on 19 July 1821. Hotham appeared frequently in the newspapers as a fashionable arrival and socialite, and he threw elaborate parties in his residence in Hinde Street, Manchester Square. He was further promoted admiral on 10 January 1837 and created a G.C.B. on 4 July 1840.

Admiral Hotham died on 31 May 1848 at New Windsor, Berkshire, and he was buried in the family vault at nearby Binfield.

On 7 June 1804 he married Anne Jeynes of Gloucester, the sister-in-law of Admiral Sir Edward Thornbrough, and they had a daughter and four sons. His eldest son, Augustus, joined the Army, and his third son, John Hotham, entered the Navy to be commissioned lieutenant in 1830. His youngest son, Frederick Earle Hotham, died in passage to India on 27 September 1831 aged 20. Following his first wife s death at Malvern on 21 August 1827 after a long and difficult illness he married Jane Seymour Colman, a heiress and widow from Hillersdon, Devon, on 25 June 1835.

As a consequence of his father s employment Hotham spent a great deal of time at court in his early years, and he was also a frequent visitor in his retirement. This exposure enabled him to record his impressions of the characters of the day in a gossip column. He also composed a work entitled Characters, Principally Professional , which provided illustrations of the personalities at court and in the Navy. He was regarded as strongly conservative but was fair and friendly to those with whom he fundamentally disagreed, and he had a huge circle of acquaintances from all social levels.