Having passed his lieutenant’s examination in 1765 Manley was commissioned lieutenant on 9 October 1770, and he saw some service in the early 1770’s as a junior lieutenant aboard the Dublin 74.

He was promoted commander of the sloop Favourite 16 on 16 May 1779, which vessel was laid up at Portsmouth at the end of the year, and during October 1780 he commissioned a captured French privateer as the Echo 18, which he took her out from his home port of Plymouth on Christmas Eve. On 12 February 1781, during a gale which one onlooker described as unprecedented, the Echo parted her cables in Plymouth Sound, and in attempting to run up the Catwater she collided with a privateer and backed astern to run aground in Deadman’s Bay. With the gale increasing in intensity her masts were cut away, but fortunately the main-mast fell towards the shore providing a bridge which allowed for her whole crew to be evacuated without loss.

From May 1781 he commanded the brig Lively 14, and after entering Plymouth in June she went out to New York in the late summer before departing Sandy Hook on 20 October to arrive at Falmouth on 13 November with dispatches from Lieutenant-General Sir Henry Clinton. Such were their importance that upon rushing them up to London, Manley was taken to a levee by the Earl of Hillsborough, and after arriving too late for that event he was instead accorded a twenty-minute discussion with the King ‘in his closet’.

At the beginning of June 1782 the Lively sailed from Plymouth for the West Indies with dispatches for Admiral Sir George Rodney. Manley left the brig when he was posted captain of the newly launched Scipio 64 on 9 October, apparently for purposes of rank only, and having achieved this promotion he spent the next eight years on the beach.

In July 1790 he recommissioned the Syren 32, described as a beautiful frigate that had just been coppered, in which he sailed on a cruise out of Plymouth at the end of September. With the fleet standing down on the conclusion of the Spanish Armament it was announced that the Syren would continue in commission for Channel service, and whilst operating out of the Devonshire port in the following year she departed in May on impress duties conversant with the Russian Armament. On 23 July 1791 she arrived at Portsmouth with pressed men prior to returning to Plymouth Sound on 22 August, but shortly afterwards the fleet was again stood down.

In June 1792 the Syren was ordered around to Portsmouth from Plymouth to join Rear-Admiral Sir Richard King, with whose flagship she sailed in the following month for that officer to take up his position at Newfoundland as the governor and commander-in-chief. The squadron returned to Portsmouth on 24 November after a sixteen-day passage, and the Syren was taken into dock in December with orders that she be fitted out with all dispatch.

By New Years Day 1793 the Syren was in the Downs under the orders of Commodore Hon. George Murray, and with a war against the new French Republic imminent she sailed with that officer’s squadron for the River Scheldt to support the Dutch in their resistance against the French advance. In the middle of February she arrived back in the Downs from Flushing, and after briefly flying the flag of Rear-Admiral John MacBride she departed in the last week of the month for the Nore to embark the Duke of York and his suite, and to escort army transports to the Helder. Once on the Dutch coast, the Syren saw action against the French Army under General Charles François Dumouriez which was besieging Willemstadt, with newspapers claiming that she inflicted one thousand casualties on the besieging force from the sea. Her men also participated in the defence of the town by taking to gunboats inshore, much to the admiration of the Dutch press, however an attempt to destroy some French vessels in the Klundert canal was unfortunately unsuccessful, and the attack saw the loss of the third lieutenant, John Western. After remaining at anchor off Helvoetsluys for some weeks, the Syren sailed for the Downs on 8 April with a number of empty transports and several other ships under convoy, and with a great deal of praise being bestowed on Manley for his support of the Army.

Sailing in escort of the Downs convoy for Plymouth on 9 April 1793, the Syren was back at Portsmouth on 11 May, and five days later she anchored in the Dover Roads to shelter from a gale. Next sent on a cruise off Portugal with the Orestes 18, Commander Lord Augustus Fitzroy, she captured the Bordeaux privateer Robert 16 on 13 June after a 28-hour chase which saw the enemy jettison so many of her guns and other materials that she lost her sail trim, and as a consequence her sailing advantage. The Syren returned with her prize to Plymouth on 8 July, much to the joy of the local population who had seen reports of her capture by two French frigates off Bordeaux.

For most of July 1793 the Syren remained at Plymouth until at the end of the month she put to sea with a convoy. By the middle of August she was in the Downs, and on the 29th she departed St. Helens with the Quebec trade. At the end of November she returned to Plymouth from Newfoundland following a twenty-nine day passage with Rear-Admiral Sir Richard King’s flagship Stately 64, Captain John Samuel Smith, during which voyage Rear-Admiral Pierre Jean Vanstabel had taken seventeen prizes out of their convoy after it had parted company in a heavy gale three days out of St. Johns.

In May 1794 the Syren fell in with Admiral Lord Howe’s Channel fleet off Ushant before proceeding to Plymouth, and on 1 June she embarked the Marquess Cornwallis and his suite at Deal for conveyance to Ostend on a diplomatic mission, Sixteen days later she arrived in the River Elbe in the company of the Active 32, Captain Edward Nagle, and with a delivery of a six hundred thousand guinea subsidy to the King of Prussia. 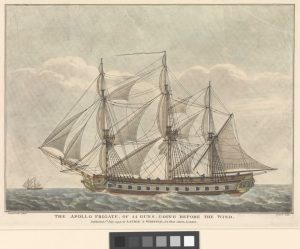 In July 1794 Manley was appointed to the brand new frigate Apollo 38 for service in the North Sea, but on 26 December, whilst returning from convoy duty to Norway, she grounded on a sandbank near Yarmouth and only managed to get off two days later once she had jettisonined many of her guns and her ammunition. Initially towed into the Yarmouth Roads, she was then taken to Sheerness to repair a significant amount of damage, with her keel being described as ‘splintered’.

On 9 April 1795 the Apollo arrived at Portsmouth to embark artillerymen for Ireland, and nine days later she sailed with a convoy for Cork. Cruising out of the southern Irish port in the spring of 1795, she joined other members of the squadron in seeing an East India convoy safely up the Channel from the Shannon in July, and on 14 October she was part of the squadron which sailed past Portsmouth with another fifteen valuable ships from the East Indies. Returning to Ireland, she left for a five-week cruise off Cape Finisterre with the Polyphemus 64, Captain George Lumsdaine, and Santa Margaretta 36, Captain Thomas Byam Martin, prior to returning to Cork on 10 December.

In February 1796 the Apollo sailed for Plymouth with a convoy and to undergo a refit, but on approaching the port found herself in danger of drifting ashore from a failing wind and had to signal for assistance. In April she arrived at Portsmouth from Plymouth, and on 22 June she captured the French corvette Légère 18 off the Isles of Scilly in company with the Doris, 36, Captain Hon. Charles Jones, after a ten-hour chase. Departing Plymouth for Cork on 11 August, she then embarked on another short cruise into the Atlantic, and in September she brought two Dutch vessels, a sloop and a merchantman, into Cork. A further success in December came when she joined the Polyphemus in the capture of the impressive Bordeaux privateer Deux Amis 14 off Ireland.

Manley continued to command the Apollo on the Irish station in the first half of 1797 without any opportunity for distinction, and in August his frigate took a convoy from Dublin to the Downs. Towards the end of the month she sailed to the northward, and on 6 November she engaged an unknown 38-gun French frigate to the west of the Orkneys, apparently forcing her to strike after exchanging single broadsides, but then having to watch impotently as her opponent fled with the benefit of the weather gauge in a heavy sea. During the action the Apollo lost one man killed and two men wounded, one of whom later died. By December Manley was at the Nore where he sat upon the court-martial of Captain John Williamson to enquire into that officer’s conduct at the Battle of Camperdown, and at the end of the trial he handed command of the Apollo to Captain Peter Halkett. At the same time it was announced that he was to become the flag-captain to Rear-Admiral Sir Horatio Nelson aboard the Vanguard 74 at Chatham, but that command was soon given to Captain Edward Berry.

From June 1798 Manley was the captain of the Mars 74 in succession to the late Captain Alexander Hood who had been killed in action on 21 April, Joining Vice-Admiral Sir Charles Thompson’s squadron off Ireland, he was with this force when it sailed in July to undertake blockade duties off Brest. In December a number of the Mars’ crew were injured in Plymouth Sound when her railings gave way under the press of two hundred men who were witnessing a flogging round the fleet. During 1799 she flew the flag of Rear-Admiral Hon. George Berkeley off Rochefort, and she also saw service with Admiral Lord Bridport’s Channel Fleet. Berkeley’s squadron returned to Plymouth on 13 July from Rochefort, whereupon Manley left the Mars and recommissioned the Windsor Castle 98, which he possibly commanded for the next three months.

On 10 May 1803, following the commencement of the Napoleonic War, he joined the Spartiate 74 at Plymouth in succession to Captain George Murray, who had been appointed Vice-Admiral Lord Nelson’s captain of the Mediterranean Fleet. Dispatched to patrol off Rochefort under the orders of Commodore Sir Edward Pellew, the Spartiate came into Plymouth in the middle of September for a brief refit before putting out on the 21st with vegetables and livestock for the fleet off Brest. She continued to be employed with Pellew off Ferrol in the early winter, and on 12 January 1804 she arrived at Berehaven Bay to join Rear-Admiral Sir Robert Calder, having become separated from Pellew’s squadron in a gale on 24 December. At the beginning of March the Spartiate arrived at Plymouth from Ferrol after being ordered to discharge all her stores and provisions into the Malta 80, Captain Edward Buller, and Manley left the ship following his elevation to flag rank on 23 April, to be replaced by Captain Sir Francis Laforey.

He did not see any further employment but was further advanced to vice-admiral on 25 October 1809, and in March 1812 was one of the pallbearers who carried Admiral Sir Charles Cotton’s coffin to a hearse at Plymouth, prior to it being taken aboard a sloop for conveyance to the Nore.

Admiral Manley died at Plymouth on 23 September 1816 after what was described as ‘a lingering illness’.

He married Elizabeth Harris, with whom he had two daughters and a son. His eldest daughter, Elizabeth, married the future Captain Sir Humphrey Fleming Senhouse in 1816. His son, Captain John Lampen Manley, was posted captain on 29 August 1812, and having commanded the Hyacinth 20 and Edinburgh 74 before the end of the Napoleonic War died on 9 June 1817, just nine months after his father. Manley’s residence was given as Plymouth in his will.