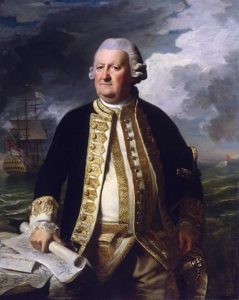 1754-1807. He was the youngest son of Captain Michael Everitt and his wife, Elizabeth Gayton. An elder brother was Captain Michael John Everitt, and he was the nephew of both Admiral Clark Gayton and Vice-Admiral George Gayton.

Known as Everitt until 1788, he was commissioned lieutenant on 20 October 1772 and was appointed to the Boreas 28, Captain Charles Thompson, on 19 February 1776, going out to Jamaica where his uncle commanded the station. That officer s patronage allowed his elevation on 27 May to the command of the schooner Racehorse 10, and on 10 July he assumed the temporary command of the sloop Atalanta 14 upon the death of Commander Thomas Underwood.

He was promoted to the sloop Badger at Jamaica as her commander on 11 November 1776, of which vessel his elder brother Michael was a lieutenant, sailing to England for a refit in the following April before returning to Jamaica. The day after his arrival he was posted captain on 7 September 1777 with an acting order for the ancient flagship Antelope 50 from his uncle who still retained the role of the commander-in-chief at Jamaica. This vessel returned home in the following April.

Whilst commanding the Arethusa 32, which he had joined earlier that year, Everitt attacked the French frigate Aigrette 32, Captain La Bretonni re, off Ushant on 18 March 1779, but was forced to break off the action after two hours when an enemy ship of the line approached. That night the Arethusa was wrecked after hitting a rock near the island of Mol ne. Thirteen men who escaped in one of the boats eventually made Fowey, but the remainder were taken prisoner and confined at Brest. His first lieutenant at this time was the future admiral and Prince of Boullion, Phillip d Auvergne.

In September 1780 Everitt commissioned the Solebay 28, capturing the privateer Comtesse Bezan ois 20 in company with the Portland 50, Captain Thomas Lloyd, on 9 December 1780, and the Marquise de Seignelay a day later. In March 1781 he went out to North America where he captured a further couple of American privateers, and was present at the Battle of Chesapeake Bay on 5 September 1781. A few days later he recaptured the sloop Savage which under Commander Charles Stirling had been taken by the Americans shortly before. Once again he lost a ship when the Solebay was wrecked after grounding off Nevis prior to the Battle of St. Kitts on 25 January 1782, the frigate being burned to prevent its recovery by the French. He returned to England with Rear-Admiral Sir Samuel Hood s despatches in March, and in November of that year commissioned the new Serapis 44, paying her off in the ensuing April.l.

In August 1794 Calmady recommissioned the Blenheim 90 for service in the Channel, leaving her upon his promotion to rear-admiral on 23 October. He was advanced to vice-admiral on 14 February 1799 and admiral on 23 April 1804.

Calmady died on 15 March 1807 and was buried in the Calmady family vault at Wembury, South Devon.

In September 1783 he became the second husband of the heiress, Pollexfen Calmady of Langdon in Wembury, and he took her surname as his own in 1788. Prior to 1783 he had lived at Headley Park in Hampshire. The couple had three children, two of whom survived infancy.