1724-89. Born in Buckland Monachorum, Devon, and baptised on 22 August 1724, he was the third born but second surviving of Sir Francis Henry Drake, the 4th baronet in the line of succession from the conqueror of the Spanish Armada, Sir Francis Drake, and of his wife, Anne Heathcote. He was the elder brother of Rear-Admiral Sir Francis Samuel Drake.

Drake joined the navy at an early age, and having been promoted commander on 18 October 1743 he was appointed to the newly commissioned Dreadnought s Prize 12, serving in the Leeward Islands.

On 29 January 1748 he was posted captain of the Fowey 20, seeing service in the West Indies under Rear-Admiral Charles Knowles during the Austrian War of Succession. His command was wrecked on the Florida Keys on 27 June 1748, but at the subsequent court martial held in England he was acquitted of any blame regarding her loss, it being put down to an unknown current.

Drake recommissioned the Mercury 20 in May 1749, going out to Newfoundland where from 1750 he assumed the duties of governor, although the position was officially held by his superior officer, Commodore Sir George Rodney. In 1751 he recommissioned the experimental Boston 20, sailing for Newfoundland in June and resuming his position under Rodney before he was himself appointed governor in May 1752, a role he left before the following year. Whilst in office he instigated changes to a justice system that had previously required prisoners to be sent home for trial, advocating that a local jail be built and justices appointed instead.

Having spent some time in command of the Winchelsea 20 in home waters and in the Mersey during the late spring of 1755 with orders to press seamen, he recommissioned the Falkland 50 in October for service in the Western squadron. Going out to North America in the spring of 1756, he was in such poor health that on 11 March 1757 he exchanged into the Biddeford 20 with his brother, Francis Samuel, as a result of an agreement brokered by his eldest brother and the previous first lord of the Admiralty, Lord Anson. 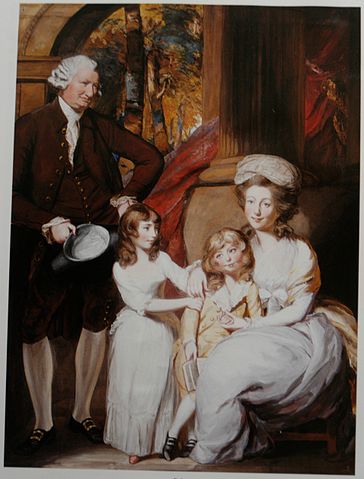 Admiral Drake with his wife, Elizabeth, and their two daughters.

After returning home he was due to join the new frigate Aurora 32 in the latter half of 1758, but difficulties with her ordnance meant that Drake, the officers and crew instead moved into the new Edgar 60 in February 1759, going out to the Mediterranean in the following April. Although he continued to suffer ill health he fought in Admiral Hon. Edward Boscawen s action with the French at the Battle of Lagos on 19 August 1759, where his ship did not suffer any casualties. He was with the Western Squadron in 1760 when his health deteriorated so badly that his life was in danger, but after recovering somewhat he served at the reduction of Belle Isle in 1761. After going out to Jamaica in February 1762 he commanded the Edgar at the capture of Havana that summer, and upon returning to England she was paid off in 1763.

During the peace Drake commanded the Plymouth guard ship Burford 70 from 1765 for the normal three years.

He was advanced to flag rank on 23 January 1778, and he served as the temporary commander-in-chief at Portsmouth in January 1779 during Admiral Sir Thomas Pye s absence at the court-martial of Admiral Hon. Augustus Keppel following the Battle of Ushant.

From April 1779 Drake was employed as commander-in-chief in the Downs with his flag aboard the Dunkirk 60, Captain John Milligan, and from November the storeship Dromedary 30, Captain William Denne. During this period he resided ashore in Deal where he suffered greatly from gout, but he remained available for active service and during the Channel Fleet retreat in August all available ships were ordered to join him in the Downs in case it were possible to effect a pincer movement on the Franco-Spanish fleet. He was promoted vice admiral on 26 September 1780, at about which time he was ordered to blockade the Dutch coast following the entry of the Netherlands to the war.

Drake briefly commanded a division of the Channel fleet from 26 September to 29 December 1780 with his flag aboard the Victory 100, Captain Samuel Wittewronge Clayton, and with Vice-Admiral John Evans and Rear-Admiral Sir Richard Hughes temporarily replacing him in the Downs. However, his gout was so debilitating that when cruising with the Channel fleet any councils of war were held by the commander-in-chief, Vice-Admiral George Darby, aboard Drake s flagship.

Returning to the Downs, he continued in command until May 1782 bar a period over the winter of 1781-2 when Rear-Admiral Sir Richard Hughes replaced him, retaining the Dromedary with Captain Denne and then Captain John Stone from August 1781. Towards the end of his tenure he briefly flew his flag aboard the Rippon 60, Captain Thomas Durell, and the Panther 60, Captain Robert Simonton, but he was too ill for any further command and he retired ashore.

Drake died towards the end of 1789 and was buried in his wife s family vault at Hursley, Hampshire.

He had a son out of wedlock with Grace Gledhill of Newfoundland in 1751, and after she followed him to England they had issue another son in 1756. This lady died shortly afterwards, much to his distress. On 3 November 1763 he married his cousin, Elizabeth, daughter of Sir William Heathcote of Hursley, whose fortune exceeded his, and who was greatly admired for her care of his two illegitimate children. She in turn gave birth to two daughters in 1764 and 1765. Drake s illegitimate son, Captain Francis Thomas Drake, was lost with the entire crew of his command, the Delight, when sailing to Newfoundland in September 1781. His younger son joined the East India service. Drake s address at the time of his will was given as at Hillington, Middlesex.

Drake was a great entertainer and socialiser, which no doubt contributed to the debilitating gout he suffered in later years. He was briefly M.P for Beeralston from 1771-4 in succession to his elder brother and as a friend to the government. Although he was not involved in the Keppel Palliser affair following the Battle of Ushant his preferment was towards the former.