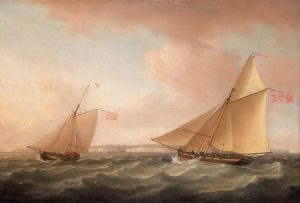 1736- c1795. The son of John Gaborian and of his wife, Jane Davies, he was born in Saltash, Cornwall, and baptised on 24 July 1736. His elder brother, James Gaborian, entered the navy and retired as a superannuated commander in 1801.

Gaborian was commissioned lieutenant on 4 January 1759 and joined the Channel-based Thames 32, Captain Stephen Colby, being present in the action with the French sail of the line Palmier 74 in March 1759 when that frigate and the Coventry 28, Captain Carr Scrope, forced their opponent to scurry into Brest. He remained with the Thames when Captain John Elliot assumed the command in 1760, seeing some duty off the Portuguese coast.

Following the peace in 1763 Gaborian found a position aboard the Plymouth-based guardship Edgar 60, Captains George Collier and Robert Carpenter, where he remained until the beginning of 1768. Retaining his lieutenant s rank, he commanded the cutter Folkestone 6 during 1768-71.

During the early years of the American Revolutionary War he was active in the Channel with the cutter Sherbourne 6, which he had joined in 1775. In the summer of 1777 he was despatched by Vice-Admiral Lord Shuldham at Plymouth to hunt down a troublesome American privateer, the Montgomery. On 16 June, having disguised his cutter as a smuggling vessel which had been pursued into the port of Cherbourg, he sent his pilot into the town to make the privateer captain the worse for wear through drink and then made him prisoner after tricking him into coming aboard. Such was the outcry at his subterfuge that the American commissioners to the court in Paris, Benjamin Franklin and Silas Deane, complained to the French foreign minister.

Gaborian was soon rewarded for his resourcefulness by being promoted commander on 17 September, and he was given command of the small sloop Wolfe 8. In March 1778 he was in Dublin Bay preparing to escort a small convoy of merchantmen to London.

He was further promoted by being posted captain on 13 May 1778 on the occasion of the Kings review of the fleet that month, and he joined the Amphitrite 24 in the Downs where he took several prizes. He later commanded this vessel in the Channel fleet retreat of August 1779 before leaving her in 1780, and he was not thereafter employed.

Gaborian was excluded from the list of officers advanced to flag rank on 1 June 1795 and he appears to have died shortly afterwards as his will was proved in July, his last address being given as Saltash, Cornwall.