@1734-1780. He was born in Plymouth, the son of Israel Pownall who became the master-shipwright at that base and between 1756 and 1761 built many ships including the Royal George 100, Blenheim 90, Princess Amelia 80 and Mars 74. He was the brother of Jacob Pownall, the naval storekeeper at Gibraltar, and from 1782 at Plymouth. His sister, Sarah, married Captain Charles Proby in 1758. 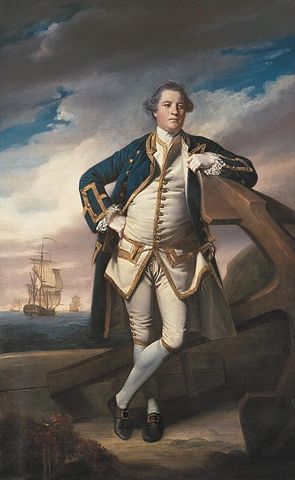 He was promoted commander of the Favourite 16 on 6 August 1759, and in July 1761 was under the orders of Captain Charles Proby of the Thunderer 74 off Spain, being present at the capture of the Achille 64 and Bouffonne 32 by this officer’s squadron. On 21 May 1762 he earned himself the immense fortune of £64,872 when the Favourite assisted the Active 36, Captain Herbert Sawyer, in the capture of the Spanish register-ship Hermione, which had been bound for Cadiz from South America with a half million pounds worth of treasure aboard. The Spanish had been unaware of any declaration of war, and they surrendered without coming to action. It was one of the greatest prizes ever taken by a British naval officer.

Pownall left the Favourite in August 1762, and although posted captain on 10 January 1771 he otherwise remained unemployed throughout the peace over the next thirteen years.

In December 1775 he returned to duty by joining the Blonde 32, which was recommissioning at Chatham, earning great praise in high circles for seeking service despite his immense wealth. In April he sailed for Quebec with twenty ships in convoy, and by September his command was in the St. Lawrence River, prior to returning to England.

In January 1777 he removed to the Apollo 32, and embarking at Plymouth the commander-in-chief designate of the army in Canada, Lieutenant-General John Burgoyne, he returned to Quebec on 6 May. Later in the year he took the Boston privateer Freedom 12, but as the authorities did not wish to detain his ship on largely inactive duty off Canada, he sailed for New York where, on 3 October, he supervised the transportation of the Army some sixty miles up the Hudson River to attack two rebel forts. Shortly afterwards, he was sent to join Vice-Admiral Lord Howe’s fleet that had been engaged in the Philadelphia campaign from 25 August , and he remained thereafter in the Delaware River. In the following year he served in Lord Howe s defence of New York in July 1778 and the manoeuvres off Rhode Island in August , where the Apollo sprung her fore and mainmasts and had to be escorted back to Sandy Hook. She returned home to be coppered at Plymouth over the winter.

On 31 January 1779 the Apollo was cruising off Brittany when she came upon a convoy of nine merchantmen under escort of the French frigate Oiseau 32, Lieutenant de Tarade. The Frenchman put up a brave fight against Pownall’s superior firepower and skill until the Apollo shot her colours away and Pownall’s men took possession of her. The Oiseau was carried to England in fair weather and bought into the service. Both Pownall, who received a ball to the left breast which was never extricated, and de Tarade were wounded in the action.

Pownall continued to command the Apollo in the Channel, and in company with the Jupiter 50, Captain Francis Reynolds, and the Crescent 28, Captain Charles Hope, he assisted in the capture of the French cutters Mutine 14 and Pilote 14 on 2 October 1779. At the Moonlight Battle of 16 January 1780 the Apollo engaged the Monarca 70 for upwards of an hour, thereby enabling Admiral Sir George Rodney’s flagship, the Sandwich 90, to come up and capture her.

On 15 June 1780 Pownall lost his life with five of his men in an inconsequential and indecisive action with the French privateer Stanislas 26 in the Channel. Shortly after the action the privateer went aground off Ostend, and after being salvaged she was sold to the British Government to be commissioned as HMS Proselyte under Captain John Brown, whose father, Capability Brown, had landscaped the grounds of Pownall’s estate in Devon.

Pownall’s capture of the Hermione netted him a fortune some six hundred and forty times his annual salary and enabled him to marry at Gibraltar Jane Majemdie, the daughter of a Lisbon merchant who had earlier rejected the young naval officer on the basis that he had not the funds to maintain his daughter. Captain Sawyer married another daughter on the same basis. Pownall used his riches to purchase the Sharpham Estate in Ashprington, Devon, where he built a new manor house and obtained the services of Capability Brown to landscape his gardens.

Pownall was a brilliant and popular officer who was one of the stars of the navy and would undoubtedly have earned greater fame but for his early death. Sir Edward Pellew, the 1st Viscount Exmouth, was his devoted pupil, and this officer’s excellence in all aspects of the role of a naval commander reflected on the example he had been set by Pownall, a fact Pellew acknowledged by naming his eldest son after his mentor. Jervis described Pownall as the best officer under every line of description in the service .