1726-1816. The elder son of Nathaniel Ogle of Kirkley Hall, Northumberland, and of his wife Elizabeth Newton, he was also the nephew of Admiral of the Fleet Sir Chaloner Ogle.

Ogle was commissioned lieutenant on 19 November 1745 and in this rank recommissioned the Swan 10 in April 1755, being promoted commander of that vessel on 17 June 1755 and sailing for Gibraltar. 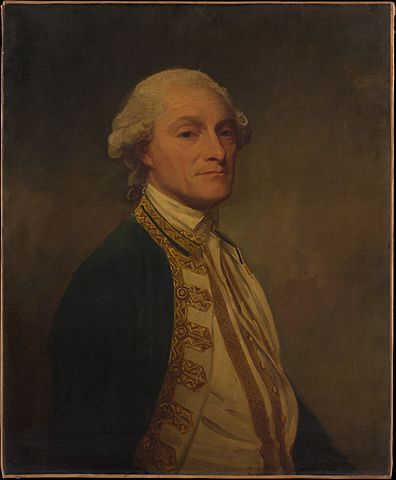 He was posted captain on 30 June 1756 and was appointed to the Yarmouth 64 in which he served with Vice-Admiral Hon. Edward Boscawen s fleet off Brest. In September he took passage out to the Mediterranean aboard the Ambuscade 40, Captain Richard Gwynn, and assumed temporary command of the Chesterfield 44 whose captain, William Lloyd, was required to give evidence at the court-martial of Vice-Admiral Hon. John Byng which resulted in that officer s death sentence.

After returning to England, Ogle was appointed to the new Aquilon 28 in 1758. During 1759 he was attached to Commodore Sir Piercy Brett s squadron in the Downs, and he then served under Admiral Sir Edward Hawke in the following year off France. Whilst cruising in 1761 he captured a host of privateers in the eastern Atlantic, the largest of which was the Count de Grammont 20 on 31 January, with another prize being an East Indiaman, the Subtile 16 on 7 August. At the end of the year he sailed for the Leeward Islands to warn Rear-Admiral George Brydges Rodney that the Brest fleet had been despatched to those waters, and he remained on that station until he came home in command of the Nottingham 60, which was paid off in July 1763.

In 1768 he was knighted, and during the Falkland Islands dispute of 1770 was appointed to the new Elizabeth 74, retaining the command but for a brief period until the following spring. From August 1775 he commanded the guardship Resolution 74 at Portsmouth in succession to the late Captain John Hollwall, and in the latter months of 1777 saw duty off Portugal with Captain Hon. Robert Digby s squadron.

After sitting Vice-Admiral Sir Hugh Palliser s court martial subsequent to the Battle of Ushant on 27 July 1778, from which engagement he had been absent,he flew a broad pennant aboard the Resolution in Vice-Admiral Lord Shuldham’s squadron which escorted several large convoys out of Portsmouth that winter,, and his command formed part of the Channel fleet involved in the controversial retreat of August 1779.

The Resolution, newly copper-bottomed, next joined the fleet sent out under Admiral Sir George Rodney to relieve Gibraltar in 1780, and she accepted the surrender of the Princesa 70 during the Moonlight Battle of 16 January. On the voyage back to England, during which Lord Robert Manners was the flag-captain under Ogle s broad pennant, the Resolution captured the Prot e 64 after a half hour action, and without the loss of a single man.

In May the Resolution went out to North America with Rear-Admiral Thomas Graves squadron, and after arriving in July one of Ogle s first tasks was to preside over the court-martial of Captain Nathaniel Bateman of the Yarmouth 64, which saw that officer controversially dismissed the service. Having moved on to the Leeward Islands with Rodney s fleet, Ogle returned to England in February 1781 aboard the Greyhound 28, Captain William Fooks, as he had been advanced to the rank of rear-admiral on 26 September 1780.

He did not see any further service but was promoted vice-admiral on 24 September 1787 and admiral on 12 April 1794.

Ogle died at Kings Worthy, Hampshire, on 27 August 1816, having been created a baronet in January of that year. At the time of his demise he was the senior admiral in the fleet.

On 7 September 1761 he married Hester Thomas, the youngest daughter of the Bishop of Winchester, and they had issue three sons and three daughters, including Admiral of the Fleet Sir Charles Ogle, and Major Thomas Ogle, who lost his life in the Egyptian landings of 1801 whilst serving with the 58th Regiment. His nephew was Rear-Admiral Mauritius Adolphus De Starck. The manor of Kings Worthy in Hampshire was purchased by him in 1773.