1741-95. He was baptised on 7 March 1741 at Aleverstoke, Hampshire, the son of Captain Sir Samuel Marshall and of his wife Edith Pratt.

Marshall joined the service in 1753 as a captain’s servant to his father aboard the Portsmouth guardship Tyger 60, and he saw further service with his father on the Bristol 50 at Plymouth, and aboard the Nottingham 60, which went out to North America in early 1755. He was thereafter employed on that station aboard the Somerset 70, Captain Edward Hughes, and Admiral Hon. Edward Boscawen’s flagship Namur 90, Captain Matthew Buckle, prior to joining the Terrible 74, Captains Richard Collins and John Montagu. He was commissioned lieutenant on 11 February 1760.

On 4 September 1762 he was promoted commander of the sloop Antigua 14 by Rear-Admiral George Brydges Rodney in the Leeward Islands. It was reported that just prior to the end of the Seven Years War in February 1763, the Antigua was boarded at night by two privateers of comparable force off Guadeloupe but fought them off at a cost of seven casualties as opposed to thirty-four, whilst also capturing one of the privateers in the process. After returning to England, the Antigua was paid off on 17 June.

Following seven years out of employment, Marshall’s next command was the Merlin 18, to which he was appointed on 9 October 1770 whilst she was fitting out at Portsmouth for service in the Falkland Islands dispute with Spain. This was but a short commission, for he was posted captain on 24 January 1771 of the Princess Amelia 80, which was fitting out at Portsmouth for the flag of Vice-Admiral Sir George Rodney, and which put out of the harbour for Spithead on 12 April, prior to sailing for Jamaica with three other sail of the line, a frigate, and a sloop. On 31 May 1773 Marshall and Rodney exchanged with Captain Andrew Barkley into the Portland 50, in which they returned to Portsmouth on 31 August 1774, prior to that vessel paying off at Sheerness on 29 September.

Commanding the frigate Arethusa 32 from Boxing Day 1776, Marshall arrived at Portsmouth from Lisbon on 19 April 1777, having safely brought home a convoy despite the attention of two American privateers in the Bay of Biscay. His command cruised unsuccessfully in search of privateers between England and the Netherlands during May before entering the Downs, and she was next employed in the Channel in protection of the trade. During July she arrived at Harwich with thirty-four smugglers who had been captured after their vessel had opened fire on a naval patrol, and she then proceeded to the Nore to place the men on a guardship. Somewhat incredibly, the smuggler captain, a man by the name of Sloney, escaped custody in what appeared to be a well-supported operation and took a boat from Folkestone to France. 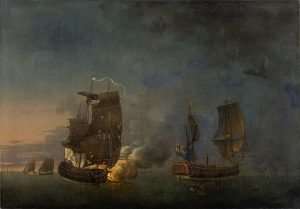 The action between the Arethusa and the Belle Poule

Sailing for Ireland from Portsmouth in August 1777, the Arethusa was ordered to cruise between the Mull of Galloway and Belfast Loch, and she remained in these waters for the rest of the year. In May 1778 she put out of Plymouth for Portsmouth to join the Grand Fleet under Admiral Hon. Augustus Keppel, as war with France was imminent. In the course of the preliminaries before the Battle of Ushant on 27 July, the Arethusa fought a famous action with the heavier French frigate Belle Poule 32, as a result of which she was badly damaged aloft, forcing Marshall to retire after a couple of hours and seek the safety of the fleet. Taken in tow by the Valiant 74 and the Monarch 74, the Arethusa was docked to repair her damages which were described as ‘considerable’, before she sailed to rejoin the fleet on 11 July.

In August 1778 the Arethusa helped bring the West India convoy into Plymouth before rejoining the Grand Fleet as one of three scouting frigates, and she returned to Portsmouth with the fleet towards the end of October. Days later, a homeward bound West Indiaman which she had captured put into Plymouth, and on 20 November she sailed from Portsmouth on a cruise. During January and February 1779 Marshall was a witness at Admiral Keppel’s court martial, whereupon Captain Charles Holmes Everitt succeeded him in command of the Arethusa. He was also a witness at Vice-Admiral Sir Hugh Palliser’s court-martial in April.

On 23 July 1779 Marshall recommissioned the newly copper-sheathed frigate Emerald 32 at Chatham, but for several days she remained in the Gillingham Reach for want of a fair wind. On 18 September she passed Harwich whilst in passage from the Nore to Scotland, and five days later she arrived in the Leith Roads. Here she found herself serving under the orders of Captain Thomas Burnet with a squadron of frigates that had been sent to protect the coast of Scotland from John Paul Jones’ rebel privateer squadron. In November she was engaged in convoy duty to Elsinore, from where she left on 14 November to reach the Nore on 4 December. She was then attached to Commodore Charles Fielding’s squadron that detained Count Van Bylandt’s convoy on 31 December, on which occasion Marshall undertook negotiations with the Dutch admiral, before on 2 January 1780 he took news of the encounter to the Admiralty in London.

Returning to sea from Portsmouth on 15 January 1780, the Emerald joined a small squadron which sailed at the end of the month for Lands’ End in search of two privateers which had been active on the Cornish coast, and during the succeeding months she was in and out of the Channel ports. On 23 April a squadron under Marshall’s command captured the French privateer Dunkerquoise 20, and it also took two Dutch vessels off the coast of France which were laden with military stores for that country. The Emerald next served with the Channel Fleet in its campaign from June-December, and in January 1781 she carried General Henry Seymour Conway to his governorship of Jersey.

On 29 January 1781 the Emerald entered the Downs prior to rejoining the Grand Fleet at Spithead, with which she was present at the relief of Gibraltar on 12 April. She later formed part of the fleet during its campaign of June-November, in which capacity she reconnoitred the allied fleet. Whilst off Guernsey on 24 August she captured the St. Malo privateer Frederic 16, which she sent into Plymouth, and she also took the cutter Comte de la Motte-Picquet 8 on 7 September, which was also sent into the Devonshire port. Eventually leaving the Grand Fleet whilst it was cruising off Cape Finisterre, she entered Portsmouth on 28 October.

Marshall was next appointed to the frigate Flora 36 on 15 November 1781, departing Portsmouth on 17 December for Plymouth with Admiral Sir George Rodney’s reinforcements for the Leeward Islands, but parting from that force during a storm in the middle of January 1782. After reaching the Caribbean, she witnessed the Battle of the Saintes as a repeating frigate on 12 April, and upon being ordered back to England she reached Bristol on 21 September in the company of the Montagu 74, Captain George Bowen, which was flying the flag of the recalled Admiral Rodney. The Flora then dropped around to Portsmouth on 9 October.

Marshall did not see any further active service on account of his poor health, although he did command the Portsmouth guardship Pegasé 74 from April 1783 until he accepted a position as a Commissioner of the Victualling Office in October 1787. He became a Commissioner of the Navy in December 1793, was knighted during the occasion of the King’s visit to Spithead on 29 June 1794, and he became the Deputy-Controller of the Navy in October 1794.