Broughton first went to sea in June 1780 aboard the Valiant 74, Captain Samuel Goodall, seeing service in the Channel, at the Relief of Gibraltar on 12 April 1781, and in Rear-Admiral Richard Kempenfelt’s action with the Comte de Guichen on 12 December. After the Valiant went out to the Leeward Islands with Admiral Sir George Rodney’s reinforcements in early 1782, he fought at the Battle of the Saintes on 12 April. Upon the fleet’s arrival at New York from the West Indies later that summer, he joined the floating battery Rhinoceros 34, Commander Richard Keats, at the behest of the local commander-in-chief, Rear-Admiral Robert Digby, and he afterwards saw service with Keats aboard the Bonetta 14 on the New York station.

During the peace following the end of the American Revolutionary War in 1783, and benefitting by a recommendation from Admiral Lord Howe, he served aboard the frigate Phaeton 38, Captains John Colpoys and George Dawson, and the Elizabeth 74, which saw duty as a guardship at Portsmouth for two years from April 1786 under Captain John Bourmaster. After further employment aboard the Carnatic 74, Captain John Ford, which flew Commodore Goodall’s broad pennant during the Plymouth Naval Review of 18 August 1789, he was commissioned lieutenant of the Goliath 74, Captain Archibald Dickson, on 26 August. During the Spanish Armament in 1790, he was a junior lieutenant of the Gibraltar 80 under Captain Goodall from May until September, and then of the London 98, Captain George Westcott, with the promoted Rear-Admiral Goodall’s flag until the end of the year.

Following the opening of the French Revolutionary War, Broughton saw service aboard the Orpheus 32, Captain Henry Newcome, in the Duke of York’s expedition to Flanders during the summer of 1793, and after a stint on the west coast of Africa, he became the frigate’s first lieutenant when she sailed for the East Indies at the end of the year. He was promoted commander by the Admiralty on 7 January 1795 as a reward for his participation in the capture of the French frigate Duguay Trouin 34 off the Isle de France on 5 May 1794, the date of his promotion being that when Captain Newcome’s dispatch was received in London. It is not clear when news of his elevation reached the East Indies, but he was present at the capture of Malacca from the Dutch in August 1795, following which he returned to England.

In August 1797, Broughton commissioned the recently purchased bomb Strombolo, a vessel described as an ‘unattractive ex-collier’, which was completed at Woolwich in October. She was present with other vessels at the capture of the Spanish brig San Leon 16 on the Lisbon station on 28 November 1798 and served under Rear-Admiral Lord Nelson’s orders in the Mediterranean during the summer of 1799, being sent to Tunis with a Portuguese officer and letters for the consul. She was later present at the blockade of Malta under Nelson, and reportedly at the capture of the Généreux 74 on 18 February 1800, and the Guillaume Tell on 31 March. At this time, Nelson confided in Admiral Goodall that it was his intention to post Broughton into the French frigate Justice 44, which was under blockade in Valetta by his squadron, but when the Spanish frigate Florentina was taken off Cadiz by another British squadron on 7 April, Broughton was ordered to commission her at Malta.

Continuing with the Florentina, but still holding the rank of master and commander, Broughton proceeded to cruise in the Adriatic and off Italy, and he was later credited with capturing the celebrated French Revolutionary Jean-Lambert Tallien, who on 18 November had departed the French Army in Egypt aboard the Heureuse Union. The Florentina delivered troops to the Egyptian Expedition in 1801 prior to cruising with the Mediterranean Fleet off that coast in the summer, and Broughton was finally posted captain on 3 August. His command was stationed at Malta in the winter, during the spring of 1802 she visited Sicily to take on bullocks for the fleet, and on 31 May she arrived at Portsmouth from the Mediterranean, whereupon Broughton left her and she was sold out of the service.

In September 1803 Broughton was appointed to the Magnanime 44, which departed Plymouth at the beginning of November to serve as a floating battery off Sand Bay, near the present-day Weston-Super-Mare, in order to guard the approaches to Bristol, and on 28 June 1804 she arrived at Portsmouth after being relieved of this duty. During the first week of July, she took a convoy around to the Downs, and on 1 August joined the attack on Le Havre, which was led by Captain Robert Dudley Oliver of the Melpomene 44. She was back in the Downs towards the end of the month, and on 30 August entered Sheerness for a refit, whereupon she was laid up.

Broughton briefly commanded the Polyphemus 64 from 4 to 22 October 1806, taking her from Plymouth into Portsmouth at the end of this period where she was victualled for service in the South Atlantic, and the command turned over to Captain Peter Heywood.

He was next appointed to the new eighteen-pounder frigate Meleager 32 at Chatham in November 1806, with the vessel being launched shortly afterwards, and on 17 March 1807 she arrived at Yarmouth from the Thames. Five days later she put out on a cruise, and she was back in the Yarmouth Roads during May from where she sailed in the last week of the month in the company of the Shannon 38, Captain Philip Broke, with instructions to protect the Greenland whaling fleet. After reaching a position of 80 degrees 60 min north, and visiting Spitzbergen but failing to find the whalers, the two frigates entered the Leith Roads on 20 August. The Meleager then rejoined the Yarmouth station, and towards the end of September sailed for the Downs, prior to going up the Thames for a refit at Sheerness.

On 18 October 1807 the Meleager arrived at Portsmouth from where she attempted to sail for Barbados and Jamaica on 15 November with the West Indies convoy, having aboard the governor of Curacao, Sir George Cockburn, and his suite. Within hours she was forced back through the disobedience of the merchant ships, but she was evidently soon at sea again, for two days later the convoy passed the Lizard, and on 30 December it arrived at Barbados, having become detached from some twenty vessels in passage due to the rough weather. On New Year’s Day 1808 the Meleager departed Barbados for Jamaica with the merchantmen destined for that island, to arrive ten days later.

Remaining on the Jamaican station, on 8 February 1808 the Melager’s boats cut the French privateer Renard 1 out of Santiago de Cuba, and eleven days later she captured a Spanish privateer, the Antilope 6, which was laden with wine, brandy, silks, dry goods and forty-seven thousand dollars, and which had been bound from Vera Cruz to Cadiz. By now it appears that the Meleager had become riven with yellow fever, for on 10 March a lieutenant by the name of Swinburn died at Port Royal, and on 22 April Broughton was succeeded by Captain Frederick Warren due to his own ill health. He departed for England a fortnight later aboard the Arethusa 38, Captain Sir Charles Brisbane. 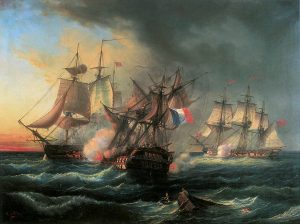 One of Broughton’s later commands was the Indefatigable, depicted here on the left in action with the Droits de l’Homme in 1797

In December 1809, Broughton was appointed to the Indefatigable 44, which entered Plymouth to revictual on 17 February 1810 after a cruise, and on 10 July arrived at Portsmouth from the north coast of Spain to refit, having brought home dispatches and letters from the Army. Departing Portsmouth on 30 August for the blockade of Brest, she arrived back at the Hampshire port from the Basque Roads in early 1811. Having returned to sea, she then entered Plymouth towards the end of the month with news that three French frigates had escaped from Lorient, and at the end of March she sailed for Plymouth.

In the first week of April 1811, the Indefatigable left Portsmouth with the China fleet of seven vessels, on 27 July the convoy departed the Cape, and having arrived in China, Broughton’s command left Macao with the homeward-bound fleet on 15 January 1812. The thirteen-month round voyage was completed when on 13 May the convoy numbering a dozen vessels passed Portsmouth to arrive in the Downs two days later. The Indefatigable then sailed around to Sheerness where Broughton handed over command to Captain John Fyffe.

From July 1812 he commanded the newly commissioned Cornwall 74, which spent the next couple of months fitting out at Sheerness before sailing out of the harbour at the beginning of September. On 6 October she arrived in the Downs with the North Sea Fleet, and she later saw service off the Basque Roads before Broughton left her following the death of a near relative in February 1813, to be replaced by Commodore Edward Owen.

Broughton was promoted rear-admiral on 22 July 1830 following the accession to the throne of King William IV, on which occasion he was also presented to the new monarch at a levee. After a long, painful illness he died at the home of his son-in-law at Charlton Rectory, near Dover, on 2 October 1837.

Broughton’s address as listed in his will, was at Blackwater in north-east Hampshire.

In 1800 Nelson described him as ‘an Admiralty man’, deserving of promotion, and an officer who was modest and excellent.