1767-1847. The son of George Parker of Wexford and of his wife, Katherine Gore, he was the nephew of Admiral Sir Peter Parker, cousin of Vice-Admiral Christopher Parker, and a descendant of the Rev. Dr Matthew Parker, an Archbishop of Canterbury who had served Queen Elizabeth I.

Having been entered on the books of the Barfleur 90 at Portsmouth on 21 December 1773, and then the Bristol 50 in 1775, both of which vessels were commanded by his uncle, Parker first went to sea on the latter ship serving at Jamaica where Rear-Admiral Sir Peter Parker was the commander-in-chief. On 13 April he removed to the Lowestoft 32, commanded by his cousin Captain Christopher Parker, and in November transferred with this officer to the Diamond 32. On 13 March 1782 he was commissioned by his uncle to be lieutenant of the Hussar 28, Captain Thomas Macnamara Russell, returning home with that ship in the summer of 1783 after her action with the French Sibylle 32 on 22 January.

During 1786 he joined the sloop Wasp, Commander John Hills, serving in the Downs, and in October 1788 was appointed to the Phoenix 36, Captain George Byron, going out to the East Indies with Commodore Hon. William Cornwallis s squadron in 1789 where he saw action ashore with General Sir Robert Abercromby s forces against Tippoo Sahib. After serving under Captain Sir Richard Strachan on the same vessel as first lieutenant in the action with the R solue 32 on 19 November 1791 he returned home with Cornwallis despatches in October 1792.

Parker next joined the Crescent 36, Captain James Saumarez, and was her first lieutenant at her capture of the French frigate R union 40 on 20 October 1793. On 4 November, as a reward for his part in the action, he was promoted commander of the newly commissioned sloop Albacore 18, serving in the North Sea and reporting from North Shields on the number of enemy frigates off Norway in November 1794.

On 7 April 1795 he was posted to the Squirrel 20, bringing a convoy of Oporto wine ships into Leith in June and then sailing around to Aberdeen to collect a convoy for Hamburg. In August he sought sanctuary with a convoy in the Humber on hearing that the Dutch fleet was at sea, and in the first half of 1796 he cruised off Norway in watch over a Dutch squadron before returning to Sheerness in June. During August he conveyed George Hammond and his suite to Cuxhaven from that port in order for the diplomat to undertake a mission to Berlin and Vienna. 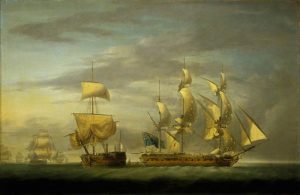 From December 1796 Parker commanded the Santa Margarita 36, sailing out of Plymouth on a cruise off Ireland where during a profitable eighteen months he took many prizes including the Spanish privateer San Francisco 14 on 21 June 1797, the Bayonne-based Adour 16 off Cape Clear on 10 July, and the Nantes-based privateer schooner Victorine 16 off the same cape on 8 August.

In April 1798 the Santa Margarita sailed for the Leeward Islands with a large convoy from Cork, and whilst in the West Indies she took the privateer brig Quartorze Juillet 14 in December. After returning with a convoy to the Downs in August 1799 she left for Cork in January 1800 to escort the West Indies fleet out of home waters, and then returned to Portsmouth in April from the Downs with a convoy prior to sailing for Quebec in May with another convoy. Arriving back at Portsmouth in September, she escorted the outward bound East India convoy to a safe distance and then returned to Portsmouth in November, having in the meantime sent a Danish brig prize into Plymouth.

At the beginning of December 1800 the Santa Margarita entered Portsmouth for a refit from which she emerged in the third week of January 1801. She then proceeded to Falmouth in February to collect the Mediterranean convoy before coming back to Plymouth on 9 March. Going out to the Mediterranean, she returned to Plymouth on 25 June from Minorca with despatches after a three week passage. At the end of July she made sail for the West Indies once more from Portsmouth, arriving at Port Royal, Jamaica on 30 October, from where she finally returned in February 1802. By this time Parker was suffering from ill-health, and he accordingly resigned the command to Captain Augustus Levenson-Gower of the Pelican 18.

On the resumption of hostilities in May 1803 he was not initially re-employed and had to wait until the late summer of 1804 before joining the Argo 44 in the North Sea, which he brought into Sheerness from the Texel at the end of September to be paid off.

In April 1805 Parker recommissioned the Stately 64 for further service in the North Sea but over the next three years his vessel saw very little activity. From January to March 1808 his ship and three other sail of the line under his command remained iced up at Gothenburg with a convoy of merchantmen, but after cutting them out he saw them safely on their way then proceeded to the entrance of the Sound. On 22 March, whilst in company with the Nassau 64, Captain Robert Campbell, he captured the Danish Prince Christian Frederick 74 off the coast of Zealand after a heavy two hour engagement which left one hundred and forty three of the enemy killed or wounded, and five British killed and forty-five wounded. The prize did not survive many of her crew, for having been driven aground by the British guns she was set afire when it was deemed inadvisable to attempt to haul her off.

In May 1808, after being superseded by Rear-Admiral Sir Samuel Hood and returning to England, Parker was introduced to the King at a levee and immediately joined the newly-commissioned Aboukir 74, sailing from Chatham in July and serving on the North Sea station out of Yarmouth until ordered to the Baltic in September. By the following January the Aboukir was back at Yarmouth from where she went out on a brief cruise under the orders of Rear-Admiral Lord Alan Hyde Gardner. She thereafter remained at Yarmouth through most of the spring before sailing around to Portsmouth in July 1809 to serve in the Schelde expedition. On Christmas Day she returned to the Downs where she remained over the winter. 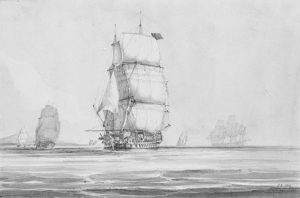 In February 1810 the Aboukir went around to Portsmouth and in March was at Plymouth from where she returned to the Downs once more in order to join the fleet that would serve off Flushing under Rear-Admiral Sir Richard Strachan. In July she departed Yarmouth for the Baltic and by September was back at her Norfolk base, prior to returning to the Downs and then entering Sheerness in December. During 1811 she saw service with the North Sea fleet on blockade off the Dutch coast where Parker s greatest excitement appears to have been his granting permission for the USS Constitution to enter the Texel with 250,000 dollars in late September.

In January 1812 the Aboukir was sent out to cruise off the Isle of Bas, but by April was back with the fleet in its monotonous watch over the Schelde. In the following month Parker vacated the command in favour of Captain Thomas Browne when Rear-Admiral Thomas Byam Martin raised his flag aboard the Aboukir to go out to the Baltic. Once she came back to Portsmouth in December Parker resumed her captaincy, and he then took a convoy out to the Mediterranean in January whilst flying the flag of Rear-Admiral Edward Foote, remaining on that station through the summer.

In the autumn of 1813 Parker exchanged with Captain Norborne Thompson into the Bombay 74 and he came back to the Downs in January 1814 from the Mediterranean with a convoy. With his ship then entering dock Parker did not serve afloat again.

Parker was nominated a K.C.B. on 6 June 1837 and in that year s general election at Yarmouth he chaired the meeting introducing the Liberal candidates, being personally intent on seeing reform driven through. In May 1838 he was presented to Queen Victoria, and over the succeeding years he continued to be a prominent member of society in Great Yarmouth. During the autumn of 1839 it was reported that he would be installed as the next commander-in-chief at Portsmouth, but many newspapers viciously denigrated the prospective appointment, stating that he had done nothing of merit at sea and had only proved himself to be a Whig-radical on land. Given his long service in convoy and blockade duty this was perhaps an accurate if somewhat unfair viewpoint. The position instead was taken up by Admiral Sir Edward Codrington.

Admiral Parker died of a severe bout of influenza at Great Yarmouth on 24 December 1847.

On 12 June 1795 at Deptford he married Harriot Butt, the daughter of Peter Butt, a Deptford Dockyard official and secretary to the Duke of Cumberland, but the couple did not have any issue and she predeceased him on 13 January 1826 at Wellington Square, Hastings. His address in 1814 was 58 George Street, Portman Square, London, and he also had a property on Yarmouth Quay.