Throughout the ten years following the end of the American Revolutionary War there had been no substantive threat to peace between France and Britain in home waters, but on the sub-continent of India the conflicts of interest between the two empires had ensured that hostilities were never far below the surface.

By 1791 the British East India Company had been engaged for almost two years in a war with Tippoo Sahib, the Sultan of Mysore in south-west India, and the son of Hyder Ali, who had been a staunch ally to the French in the American Revolutionary War. It did not take long for the suspicions of the British commander-in-chief in India, Commodore Hon. William Cornwallis, to be aroused as to the French covert military support of the Sultan, and when intelligence was received in the late summer that some neutral ships under Imperial and French colours were due to arrive at Tippoo s port of Mangalore on the coast of Malabar with military supplies, the ships of the British squadron were deployed as soon as they were individually available to enforce a stop and search policy of all the vessels in those waters.

Such a policy was sure to be controversial, and as soon as they were informed of the British intentions the French let it be known that they would not suffer their vessels to be searched. On the evening of 23 October two French ships and a brig were discovered off the British port of Tellicherry, some hundred miles south of Mangalore, and barely six miles north of the French base at Mah . At this time the sloop Atalanta 14, Commander Edward Foote, was in the Tellicherry Roads, and after getting under way she followed the suspicious vessels into the Mah Roads where an officer was despatched to undertake a search of their cargoes. He soon returned with the message that the French would not allow their ships to be boarded whilst they were in their own port, and so Foote upped the ante by despatching a file of marines to enforce an inspection of the French cargoes. Without any French men-of-war at Mah to protect them there was little the merchantmen could do but assent, and indeed it was subsequently found that the goods were not of a military nature. However, once the French frigate R solue 32, Captain Callamand, arrived at Mah it did not take long before the British policy resulted in a far more serious confrontation.

At 5 o clock on the morning of 19 November Cornwallis and his squadron were lying in the roads at Tellicherry when the gathering light revealed that the R solue and two merchantmen had come out of Mah in the darkness, and were making their way to the north. Suspecting that their early departure meant that they were bound for Tippoo s port at Mangalore, Cornwallis at once despatched two of his larger frigates, the Phoenix 36, Captain Sir Richard John Strachan, and Perseverance 36, Captain Isaac Smith,, to investigate.

By noon the French vessels were two miles distant in the north north-west from the chasing British frigates, the weather being breezy with rain squalls. Upon coming up with the Frenchmen off Mangalore the Phoenix fired an un-shotted gun to leeward to indicate that she wished to speak with the R solue, to which Captain Callamand responded with an un-shotted gun to windward. When neither the R solue nor the merchantmen displayed any sign of bringing-to the Phoenix repeated her signal, and at this point the French captain took in sail and appeared to wait for the British to come up, only to suddenly put on sail once more.

Captain Strachan was an officer to whom the concepts of patience and circumspect were alien, and without further ado he attempted to board the French frigate, a manoeuvre that although unsuccessful did prompt the French frigate to hail the Phoenix at 2.30 to enquire as to her purpose. Strachan replied that he had orders to stop and search the small convoy, and that he would send an officer across to the R solue with a more thorough explanation. The Phoenix s first lieutenant, George Parker, then took a cutter over to the French frigate and went on board to talk with Callamand, but he had barely left the French vessel, and he was still in the cutter trying to regain the Phoenix, when the French captain made a signal to the merchantmen and all three made sail. By this time two further British boats had been hoisted – one from the Phoenix and one from the Perseverance – and these were setting off to board the merchantmen.

Sir Richard s thin level of tolerance had now been tested to the extreme, and with the Pheonix rapidly closing on the convoy he fired warning shots at the French merchantmen on his larboard bow and on his larboard beam to bring them to. At this the R solue, which was on Strachan s starboard bow, fired two shots to windward which were surmised to be at the boats that were heading for the merchantmen. Meanwhile, in attempting to cut across the path of the merchantmen the Phoenix lost her ensign staff and taffrail when they clashed with one of the French jib-booms, but she then wore to confront the R solue, which was still firing at the boats, and which at 3 p.m. put a broadside into the Phoenix.

The Phoenix had been launched in 1783 and first commissioned in the Dutch Armament four years later before being paid off when the threat of war had receded. She had then been recommissioned at the end of 1788 and had sailed for India with the Cornwallis Expedition in February 1789 under the command of Captain George Anson Byron. Sadly, that officer had been forced to resign the command and return home after a boat accident that would lead to his early death, and he had eventually been replaced by the 30 year-old Strachan, who as a youth of 17 had acceded to his uncle s baronetcy. With an armament of twenty-six 18-pounder cannon on her upper deck, ten 9-pounder cannon on her quarterdeck and forecastle, in addition to her eight 18-pounder carronades, she carried a broadside weight of metal of three hundred and fifty-one pounds. She was thus far more powerful than the thirteen year-old French frigate, which could only boast of a broadside of one hundred and seventy-four pounds, consisting of twenty-six 12-pounder and six 6-pounder cannon. With such an advantage and with the Perseverance close at hand, there could only be one outcome for the Phoenix in the forthcoming engagement. 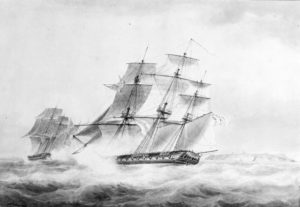 Upon coming about to close with the R solue, Strachan s frigate received a second broadside before she returned her own fire. A short engagement of some twenty-five minutes ensued, and this culminated when, in attempting to cross the Phoenix hawse, the R solue allowed Strachan to luff up and rake her from astern. The Phoenix then ranged up on the R solue starboard quarter, whereupon the outgunned French struck their colours. A boat was sent across to take possession, and it came back with the second captain, the first having been badly wounded. Ordering the Perseverance to stand by the French frigate, and being notified that the boats had searched the merchantmen but found no illicit goods, Strachan retreated into the south-west to effect repairs.

During the engagement the French frigate had lost twenty-five men killed and forty wounded, the Phoenix six men killed, including the lieutenant of marines, and eleven wounded. The defeated French officers and men now refused to work their ship and demanded that it be treated as a prize, leaving Cornwallis with little alternative but to order the Perseverance to tow the R solue into the Tellicherry Roads, which was duly reached on the 24th, With the French still refusing to work the ship Cornwallis then ordered the Perseverance to return her to Mah where she was anchored with her yards and topmasts down on deck.

Not long after this incident the French commander-in-chief in Indian waters, Commodore Armand Philippe Germain de St. Felix de Maur mont, arrived in Mah with the frigate Cyb le 36, and upon learning of the particulars he vowed to treat any British ships in the same manner that the R solue and her convoy had been treated. For several days the British and French squadrons remained in contact, but other than despatch a letter to Cornwallis deploring the action and demanding that the aggressor be brought to trial there was little that the outnumbered St. Felix could do, and the two factions eventually parted without further conflict.

On 28 December Captain Thomas Troubridge in command of the Thames 32 set off for England with Cornwallis report of the engagement, and with a request for further instructions. Having, reached the Cape on 2 February he eventually arrived at the Admiralty on 3 April. Although the government approved of Cornwallis handling of the affair there was no little concern at first as to its possible ramifications, but by now France was in the throes of the revolution and the state of affairs in India were of little concern to those who were squabbling for power in Paris. The matter was therefore largely ignored, and within a year the resumption of hostilities occurred in Europe anyway, whereupon Cornwallis seized all the French shipping in Indian waters and returned home.