1749-1823. He was the fourth born but second surviving of eight sons to a barrister, Jonathon Darby, who owned Leap Castle, fifty miles west of Dublin, and his wife, Susannah Lovett. His uncle was Vice-Admiral George Darby.

Darby joined the service at the age of thirteen, but was only commissioned lieutenant on 13 November 1776 at the relatively late age of twenty-seven. During his uncle s command of the Channel fleet from September 1780 he served aboard the flagship Britannia 100, Captain James Bradby. 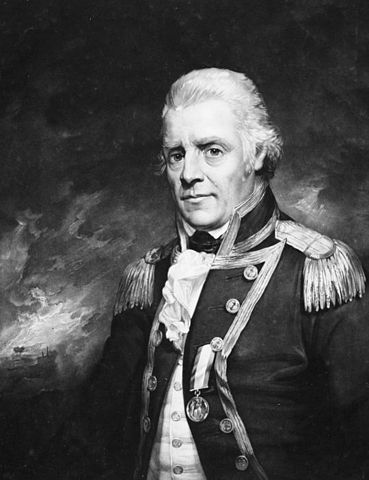 He was promoted commander on 1 January 1781, and his first vessel, the fireship Infernal 8, was attached to Commodore George Johnstone s squadron which was sent to capture the Cape. During the Battle of Porto Praya on 16 April the Infernal was left unsupported by the commodore and captured by the enemy. The French prize crew relinquished the ship when under chase by Johnstone s squadron the next day, but unfortunately Darby had already been removed, and he remained a prisoner for some time before regaining his liberty and being posted captain on 15 January 1783.

At the commencement of the French Revolutionary War, after ten years out of employment, he briefly commanded the Amphitrite 28 before he recommissioned the Pomona 28. In June 1794 he joined the Adamant 50, conveying the Mediterranean and West Indies trade that year and remaining with her for two years. He was then appointed to the Bellerophon 74 in September 1796 for service in the Channel, although before he took her to sea he had the good fortune to be late for a dinner engagement with Captain Israel Pellew, and was thus not aboard the Amphion 32 when she blew up with great loss of life at Plymouth on 22 September.

After spending several storm-beaten weeks off Ireland the Bellerophon went out to the Mediterranean in March of the following year and joined Rear-Admiral Sir Horatio Nelson s inshore squadron off Cadiz, where his ship was heavily attacked by a squadron of gunboats after becoming becalmed. The end of the year saw her sail around to the Tagus with the fleet, and the early part of 1798 was spent on patrol between Capes Trafalgar and St. Vincent before she was detached under the orders of Captain Thomas Troubridge to join Rear-Admiral Sir Horatio Nelson s squadron in the Mediterranean.

During the Battle of the Nile on 1 August 1798 the Bellerophon suffered the worst casualties in the fleet, losing forty-nine men killed and one hundred and forty-eight wounded, the latter figure including Darby who was obliged to go below in the early part of the action after being knocked unconscious. Lieutenant Robert Cathcart took command until Darby returned to the deck, but by then his ship had drifted helplessly out of the battle.

When the Brest fleet broke out on 25 April 1799 the Bellerophon was attached to Rear-Admiral Sir John Duckworth s squadron at Minorca, and Darby retained her until May 1800 when she was paid off at Portsmouth, to which port she had returned a month earlier.

In May 1800 Darby was appointed to the new Spencer 74, which formed part of the Channel fleet that year. During Rear-Admiral Ganteaume s cruise of January- July 1801 the Spencer was attached to Rear-Admiral Sir Robert Calder s squadron which was detached from the Channel fleet and sent as a precaution to the West Indies. The Spencer returned alone to Plymouth in June after becoming detached in a Channel fog, and she was placed under the orders of Rear-Admiral Sir James Saumarez whose squadron went out to blockade Cadiz. Darby subsequently commanded the Spencer at the Battle of Algeciras on 6 July 1801, where she suffered casualties of six men killed and twenty-seven wounded.

During January-September 1802 the Spencer, with Darby flying a commodore s broad pennant, was attached to Rear-Admiral Sir John Duckworth s fleet in the Caribbean, and after returning to England she was paid off in the autumn.

Darby died, unmarried, on 30 March 1823 at Leap Castle, Ireland, which he had inherited on the death of his soul remaining elder brother.

Lord Nelson described him as a good-humoured blundering Irishman .